Local Developer Starts 2020 With A Boom 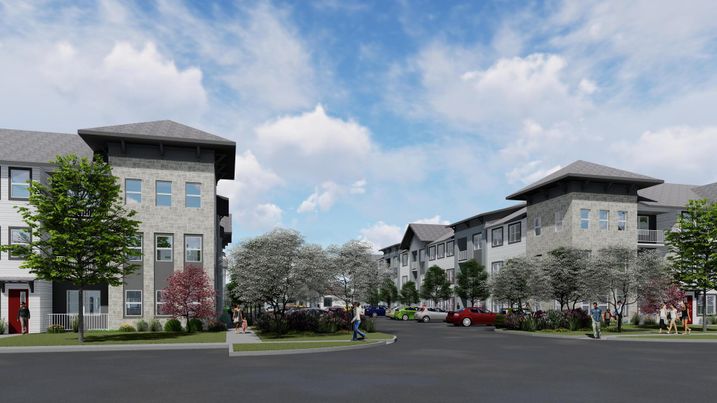 The $55M workforce housing community, called St. Mark Village, will replace a vacant lot at 97th Avenue and Federal Boulevard. Charlie Woolley, founding principal and president of St. Charles, said the project has been in the pipeline since the fall of 2017. It is expected to be completed mid-2021.

“It takes an enormous amount of time to put an affordable development together. Sites aren’t easy to come by and the neighborhood outreach for communities like ours in Westminster takes incredible time,” Woolley said.

This project will be St. Charles’ third with Citi Community Capital and equity investor City Real Estate Advisors, which is owned by Omni. The majority of its units will have two and three bedrooms, allowing it to serve families.

Woolley said that this project, along with any other workforce units that St. Charles’ develops, will lease at, or prior to, completion, as the demand for affordable housing won’t be met “for at least a decade.”

“The broader multifamily market remains undersupplied and we will continue to see rent growth and absorption as long as we continue to see job growth,” he said. “For some, the housing issue is out of sight, out of mind, but for more and more Coloradans housing affordability is becoming the No. 1 issue preventing them from living a better life.”

Even with the continued development of multifamily assets metro-wide, Woolley said that rental rates are still going up, and vacancy rates are below the 5% threshold that’s considered a healthy market. It wouldn’t be unwise to predict that St. Charles will continue to develop and build much-needed housing.

St. Charles hopes to announce another large affordable multifamily project this year, Woolley said, another one that has been in the pipeline for a few years.

“We think a sea of change in how land use and zoning are administered is needed if we are to make a dent in the housing affordability issue, and the issues facing small businesses,” he said.

On the other side of its recent activity, the two retail purchases came partly as a result of a $10.04M sale last year. St. Charles Town Co. sold 1614 15th St. in LoDo, and Woolley said the company used that “attractive offer” to take a foray into neighborhood infill sites.

“We think the urban core is only getting stronger and these well-located infill sites have great long-term potential,” he said.

However, Woolley said that retail is challenging, as internet sales, minimum wage and property tax increases are affecting small businesses.

“We’re taking an increasingly measured approach to the retail portion of our business, but remain bullish on assets with a value-add or redevelopment opportunity,” he said.

With the strong entrance into 2020, Woolley said the company has other items on its plate this year as well. A site it hoped to develop as affordable housing in Castle Rock was not greenlighted for residential, so Woolley said St. Charles is working on an approximately 140K SF mixed-use flex office, industrial, personal warehouse and retail development on the site.

“That market has increasingly high barriers to entry and dwindling ground available for development that accommodates industrial, so we’re excited to get going down there but still have a long road ahead,” he said.