Denver’s chief building officer, Scott Prisco, is being investigated by the city’s Board of Ethics over allegations that he expedited the approval process of a project linked to his family. 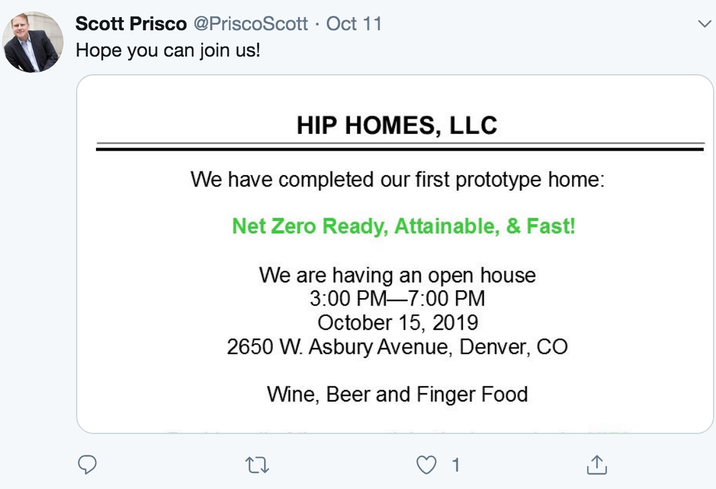 Both the board's upcoming hearing and the allegations are outlined in public records.

The Board of Ethics, which is comprised of five unpaid volunteers, is an independent agency tasked with keeping city employees in compliance with Denver's City Charter and Code of Ethics.

The board took the action after receiving complaints from three employees, one of whom no longer works for the city, in September, alleging Prisco used his office to further his personal business interests. Among the allegations are the accusation that Prisco steered approvals for a real estate project headed by a company, Hip Homes, owned by his wife.

The board called attention to the tweet in its hearing notice, pointing out that the advertisement included “a Denver logo and listed him as the Engineering & Architecture Director/Building Officer for the City and County of Denver.”

The hearing notice also says Prisco emailed city employees from his city email account asking them to do him a “favor” by logging into an official document to “avoid delay for a Hip Homes project located at 2650 West Asbury Avenue in Denver,” a property that lists Prisco as the owner.

In a phone conversation with Bisnow, Prisco said he will not be commenting further until the board makes a decision, which could come as early as its next regular meeting set for Dec. 11.

According to Board of Ethics Executive Director Lori Weiser, Prisco has 20 days to file a written response to the complaints, but can request more time for good cause.

"After receipt of this response, at its discretion, if there are no facts at issue and no demand has been made for a public hearing, the board can issue a decision based on the written materials," she said in an email.

If the responses have been received by the Dec. 11 meeting and there are no requests for a hearing, the board could deliberate at that time. If not, the next steps will be determined at the January meeting, she said.

Prisco outlined his response in a statement to the board.

"With regards to my working on the Hip Homes LLC project during working hours, I explicitly answered the question that was asked that I only work onsite on my days off and on weekends or week nights after working hours," it reads. "Inspections were not completed while I was on site.”

Prisco had reportedly asked the board in October 2018 whether his business interests with Hip Homes would violate the Denver Code of Ethics. The board advised him against using city resources including time, computers, paper and telephones for any outside business, and advised against him being involved in the permitting, inspection or construction of Hip Homes projects.

"Mr. Prisco obtained an advisory opinion from the Denver Board of Ethics in 2018 allowing him to hold both the position of Denver’s Building Official and Chief Executive Officer of Hip Homes LLC, subject to the requirements outlined in Sections 2-61 and 2-63 of the Code of Ethics,” Denver Community Planning Development spokesperson Laura Swartz said in an email to Bisnow. "We will wait to hear the screening decision of the Board of Ethics as to whether Mr. Prisco has upheld these requirements.”

According to the city's Code of Ethics handbook, if Prisco is found in violation of conflict of interest rules, his appointing authority, Mayor Michael Hancock, will consult with the city attorney to determine disciplinary action.