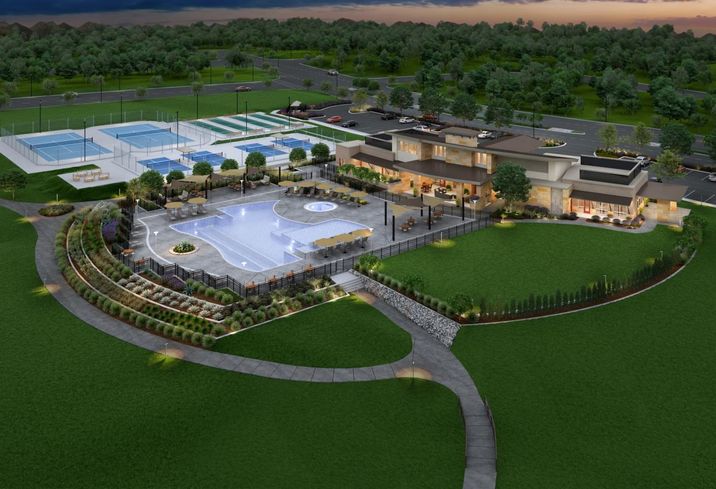 Senior housing developer Del Webb is gearing up its third active adult community in Dallas-Fort Worth, and it is a big, amenity-packed one.

With 537 homes for the over-55 set, the new community is being built on 127 acres in Trinity Falls, a 2,000-acre master-planned community northwest of McKinney. Trinity Falls has been updating its master plans to cater to baby boomers, and Del Webb's amenities offering is souped up to bolster that appeal.

The 12-acre amenity area (available only to residents of the age-restricted single-family homes) will include a 10K SF clubhouse, a fitness center, a swimming pool with lap lanes and lounging areas, a hot tub and courts for pickleball and bocce ball.

“Outdoor recreation is growing among the active adult population centered on fitness, walking, hiking and biking,” Trinity Falls General Manager Robert Ditthardt said in a news release. “This is certainly in line with the natural amenities offered in Trinity Falls.”

Earlier this year, the newest phase of the 350-acre B.B. Owen Park opened in Trinity Falls. The 99-acre section offers 12-foot-wide hike-and-bike paths along the forest’s edge, seven holes of disc golf, two lakes, a dog park and an amphitheater.

Catering to “active adults” has been a growing trend, as there is a growing group of younger baby boomers (especially in Dallas) who don't need the services of traditional senior housing but are interested in downsizing from the homes they raised their children in. In lieu of nurses and clinics, these projects often beef up amenities or locate in urban cores.

A temporary on-site information center will open for the community by year-end, the first step in development.

CORRECTION, Nov. 28, 5:55 P.M. CT: An earlier version of this story referred to the new project as Union Park, which is a different Del Webb community in DFW.