2 Submarkets Are Stealing All The Office Leasing Activity 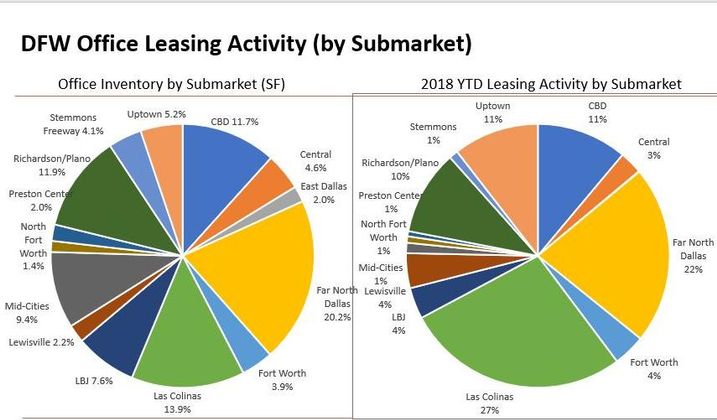 Two office markets are wrestling outside of their weight class.

Las Colinas and Uptown are taking a larger share of office leasing than their supply footprint would suggest, research by Younger Partners shows.

This is partially because of construction pipelines, Research Director Steve Triolet said — both submarkets have had a significant amount of new construction. Park District (PwC took occupancy), The Union (Akin Gump and HBK Capital moved in) and the Rolex build-to-suit contributed significantly to Uptown's outsized activity, while Las Colinas is riding the waves from Cypress Waters (Signet Jewelers/Zales and Brinker International) and the 100K SF office portion of the Toyota Music Factory (occupied by the Ethos Group). Uptown is well-established as one of the most appealing (and most expensive) office submarkets in DFW, but Las Colinas is on a roll this year overall, Triolet said. (And not just because it could be an Amazon HQ2 contender.)

"It has started to emerge as a compelling alternative in comparison to the Upper Tollway area of Far North Dallas, which has seen dramatic rental rate growth over the past few years and is starting to run into congestion issues due to the dense growth over the past couple of years," Triolet said.

"Over the past few years, with the new commercial and residential construction, Las Colinas has begun to emerge as a true live-work-play environment," Dalton said. "This, along with its close proximity to DFW Airport, makes the submarket an appealing location and gives it an overall edge over some other competing submarkets."

Major tenants that have leased space in Las Colinas this year include Allstate Insurance, Dex Media and T-Mobile. Nokia is going to consolidate its HQ into Cypress Waters when two office buildings under construction deliver.