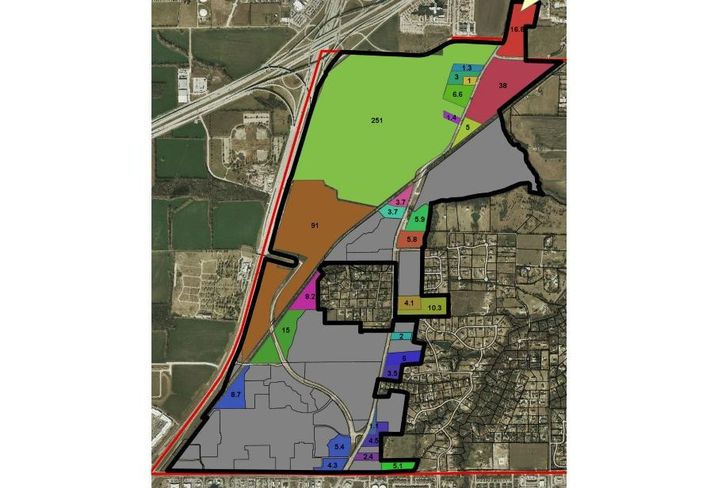 If the only reason you can point to Fairview on a map is because of The Village at Fairview, you’re not alone. But the city’s EDC is trying to change that.

Fairview’s commercial district encompasses about 800 acres within the rough rectangle defined by US 75, Frisco Road, Greenville Avenue and Stacy Road. Of that, about 450 acres have yet to be developed.

Dunlap and the EDC have worked to remove as much red tape as possible for developers by switching to form-based codes, allowing faster speed to market for projects. Incentives such as TEF, TETF and Spaceport Trust funds provide simplified financing for ground-up development.

Plus, the land is not spread out over hundreds of owners. Dunlap says one landowner has about 250 acres, another has 100, and others have decent chunks, negating the front-end work it takes for developers to assemble tracts. (Each color on the above map denotes a different landowner, and the numeral indicates the number of acres he or she owns.) The EDC is already seeing positive results.

Lincoln Property bought The Village at Fairview, which sits on the southernmost edge of this district, earlier this week. It purchased about 180 acres, about 20 of which has yet to be developed. It will spend $50M renovating the center, according to the Dallas Morning News. While the retail center — along with a sister property, The Village at Allen — has inked many tenants over the last several months, vacancy is still about 35%. Lincoln Property will explore work and creative office components for the intersection of Greenville Avenue and Stacy Road.

Two multifamily projects have already delivered and a Home2 Suites by Hilton will join the delivered Residence Inn by Marriott this summer. Overture Fairview, an active adult community, will also deliver this summer.

The city of 8.6 square miles has fewer than 9,000 residents. But, like every other city in Collin County, build-out populations show significant growth.

“We want to preserve the country feel and small town lifestyle,” Dunlap said. But with a corner of some of the most valuable real estate in North Texas at Sam Rayburn Tollway and US 75, the question of further development isn’t if, but when.