The demand fueling Chicago’s seemingly unstoppable multifamily market is transforming several lakefront neighborhoods on the North Side, as developers and investors continue to break ground on new projects and pour in capital. Edgewater and Uptown especially have been established as the foremost submarkets along the lake, while Lincoln Park and Lakeview, once the unquestioned leaders, in 2019 fell far behind in their ability to attract dollars and shovels.

The well-publicized fears among investors about possible property tax increases in Chicago after a scheduled reassessment in 2021 hasn’t done much to curtail interest in either Edgewater or Uptown multifamily properties, according to a series of new market reports by Essex Realty Group. Investors also no longer see purchasing properties there as very risky, narrowing the cap rates between Edgewater-Uptown and the more affluent Lakeview and Lincoln Park areas. 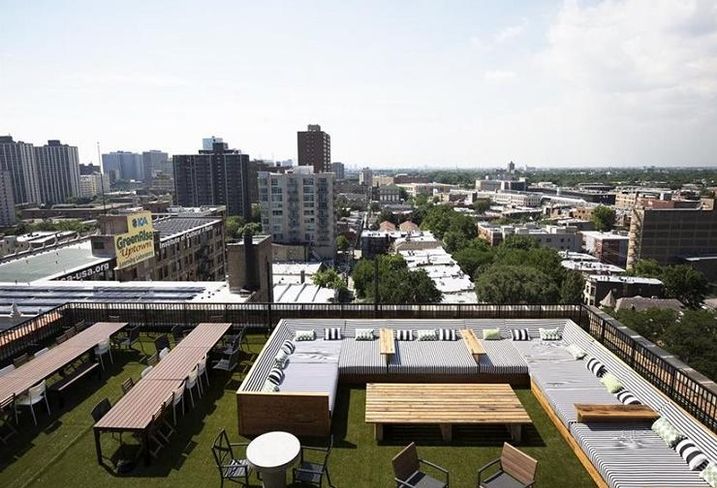 Courtesy of CEDARst Cos.
The Lawrence House rooftop in Uptown.

“If I told you five or 10 years ago I could get you properties in Uptown for nearly the same rates as you could get in Lincoln Park, you would have dismissed me, and thrown me out of your office,” Essex Realty Group co-founder and President Doug Imber said.

Imber partly attributes the Lincoln Park/Lakeview slowdown to a drop-off in the number of condo deconversions. In 2018, four of the 12 major multifamily transactions in these neighborhoods were condo deconversion deals, but last year, which only saw six deals total, there was only one deconversion. The greater restrictions recently placed on investors looking to buy and deconvert Chicago condo buildings into apartments will suppress further investment, he said.

The demand for apartments along the lakefront, especially ones near the Red Line, which quickly shuttles commuters south to the Central Business District, explains a steep rise in pricing ever since the end of the recession, according to Imber. And that leads more property owners to put their buildings on the market.

“In the last 10 years, prices have effectively doubled,” he said. “That is a remarkable recovery, and it’s not just one neighborhood, it’s across the entire lakefront.” 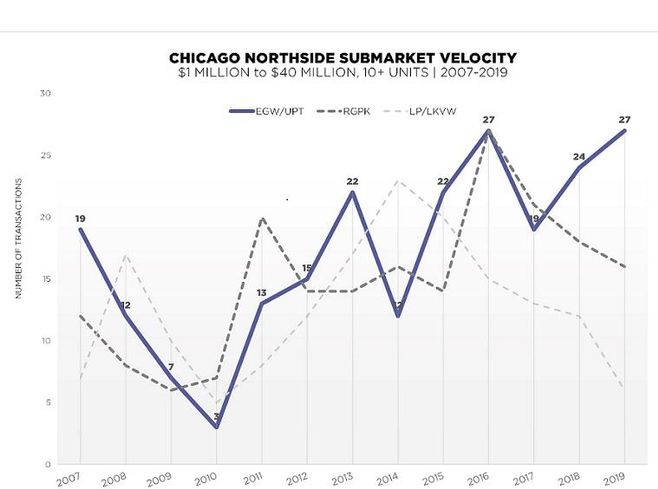 But unlike Edgewater or Uptown, which still have a lot of small property owners eager to cash in now that prices have soared, Lincoln Park is dominated by relatively few owners with many properties they see as generational holds, Imber added.

Interra Realty Director Paul Waterloo said the rise in values has been especially steep over the long term in Uptown, once an economically disadvantaged neighborhood avoided by multifamily buyers. The values of many properties there multiplied by seven since 1991.

“Investors have noticed, and have been quick to take advantage,” he said.

Edgewater/Uptown strengthened its hold in 2019 as developers’ go-to place for lakefront development. In 2018, builders had 1,751 apartments there, both new or rehabbed, either under construction or in the planning stages, and by the end of 2019, that increased to more than 2,000. In Lincoln Park/Lakeview, the numbers shrank more than half, from 1,663 in 2018 to 800, according to Essex.

If recent history is any guide, builders can expect to complete lucrative sales for many of these projects. In November, Interra brokered the sale of 5827 North Ridge Ave., a four-story, 18-unit rental community on the northern end of Edgewater. Campbell Street Asset Management sold the asset to a private investor for $3.7M, or about $205,555 per unit, the second-highest per-unit price in Edgewater up to that point in 2019, according to CoStar. Campbell purchased the building in 2017 for about $1.7M, according to Cook County records, and gut renovated it into small apartments averaging only 600 SF.

“Within both Uptown and Edgewater there is a lot of demand for smaller apartments,” Waterloo said.

The young renters now populating these neighborhoods show willingness to exchange size for modern finishes and lots of amenities, and pay $1K per month rather than the $1,800 similar units would cost in Lincoln Park, he added. 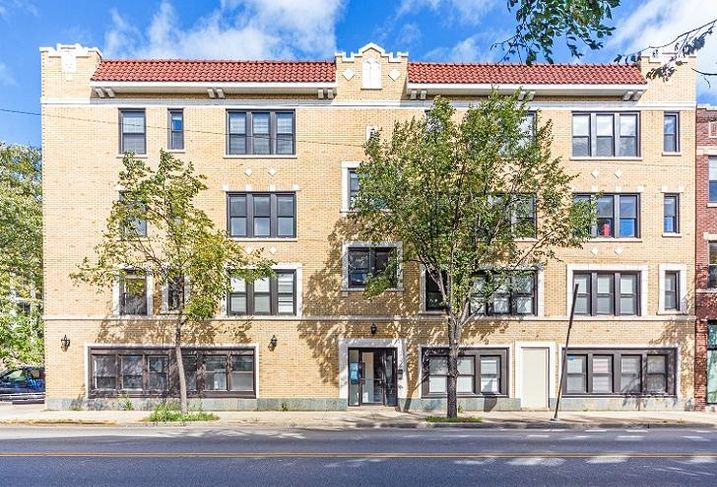 CEDARst Cos. has been one of the most active local developers, Waterloo said, and its FLATS brand of apartments satisfies the escalating demand for small units. In 2016 it opened the Uptown neighborhood’s Lawrence House, a 344-unit building at 1020 West Lawrence Ave., after spending about $22.5M buying and renovating the 1920s-era hotel into 344 units. The full-gut rehab job included adding a rooftop lounge and deck, as well as a backyard and outdoor movie screen. In November, the firm debuted the first phase of The Draper at 5050 North Broadway, an adaptive reuse of the former Combined Insurance headquarters building in Uptown into 342 FLATS apartments. The project also includes 30K SF of new retail space.

All this new development has both Uptown and Edgewater on the verge of transformations into retail and entertainment centers, Imber said.

“If you’re bring in upwards of 2,000 new units each year, it enhances the vibrancy of each neighborhood, and even the owners of rental properties that compete with the new supply will benefit as well,” he said.

New renovation projects such as Farpoint Development’s drive to reopen the long-vacant Uptown Theater, a grand movie palace built in 1925 at 4816 North Broadway St., will serve local residents and bring in thousands more from outside the neighborhood, eventually attracting even more developers in a self-reinforcing cycle, Imber said. 46th Ward Alderman James Cappleman sent an email in January to local residents that funding for the effort was almost ready, according to Block Club Chicago.

But what will keep developers coming back most of all is the rental rates they can now garner. JDL Development’s Eight Eleven Uptown, a new 373-unit apartment tower at 811 West Agatite Ave., is seeing average rents of $2.91 per SF, according to CoStar, which Waterloo said compares favorably to the roughly $3.50 Class-A multifamily buildings in River North can expect.

“That seems like a healthy rent for a new development in Uptown. These are the stories we’re telling investors now looking at the neighborhood, and they find it very exciting. Overall, it’s been a couple of good years in Edgewater and Uptown, and I expect it to continue.”