The federal government has cut individual taxpayers slack, delaying the income tax deadline until summertime. But due to the many additional burdens caused by the coronavirus crisis, beleaguered local governments don’t have the option to put off tax collections, so Cook County property owners hoping for a break may be disappointed. 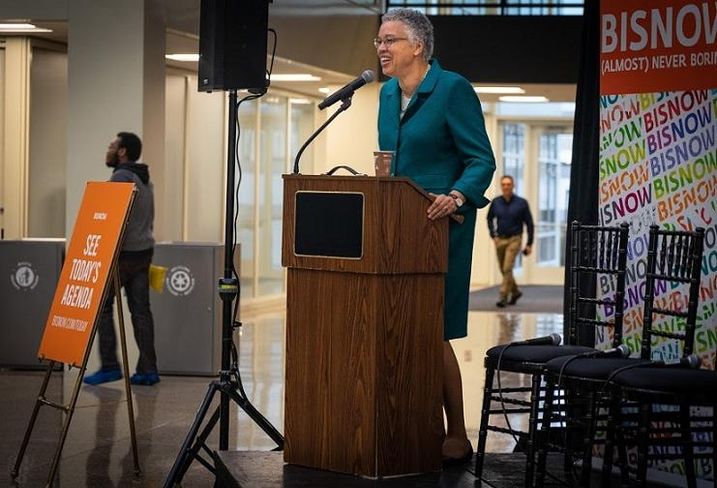 “We’re going to do our best to get property tax bills out on time,” Cook County Board President Toni Preckwinkle said Tuesday during Bisnow’s Chicago Virtual Town Hall.

That should be sometime in July, and a failure to collect those taxes in a timely manner will place further strain on the county’s finances, she added, a strain it may be impossible to accept. Other revenue sources, including hotel, amusement and sales taxes, are evaporating, and Cook County must deal with all this while serving the healthcare needs of already-vulnerable populations.

“Sixty-five percent of our revenues are dependent on the economic cycle,” she told the moderator, Verros Berkshire partner Peter Verros. “Our revenue has fallen off a cliff as economic activity has come to a halt. This is a healthcare crisis, but it’s also a fiscal crisis for our government and for our families.”

The Cook County government, in addition to losing much of its revenue while shutdowns remain in place, canceled revenue-generating surgeries to use its hospitals to care for COVID-19 sufferers, a double-whammy to its budget.

“Four or five weeks ago, the CDC ordered all hospitals to stop elective surgery, and that was exactly the right thing to do, but for our hospitals, that was the principal source of revenue,” she said.

That could soon impact the overall health of many county residents. The county runs the John H. Stroger Jr. Hospital of Cook County, as well as Provident Hospital of Cook County on Chicago’s South Side, and they handle more than 50% of the county’s charity cases, even though there are nearly 70 other hospitals, she said.

“For 185 years, we’ve taken care of whoever comes through our doors, and we will continue to do that, but that’s done at a tremendous cost.”

In addition, like the city of Chicago, the county is housing homeless people and COVID-19-positive residents in hotels.

The long-term fiscal impact of all these efforts, coupled with the lack of revenue, won’t be clear for some time.

“I can only say that it will be dire,” Preckwinkle said.

Although she strongly supports Gov. J.B. Pritzker’s mid-March shutdown decision, Preckwinkle said if it lasts beyond May 30, the government’s already-precarious position will significantly worsen.

The coronavirus pandemic is a national and international calamity, but it isn’t hitting all areas equally. Portions of the Chicago area that were suffering from poverty and disinvestment before the onset of the crisis are now getting hit harder by the disease, and the economic decline caused by the measures taken to combat it.

Preckwinkle said she is particularly concerned about residents of the south suburbs, a region she has made the focus of her third term in office. Nationally, the victims of COVID-19 are disproportionately elderly and African American, especially those with underlying medical conditions such as diabetes, obesity and hypertension. That makes the county’s south suburbs particularly vulnerable.

According to the latest statistics from the Cook County Department of Public Health, on April 21 the Cook County suburbs, excluding Evanston, Oak Park and several townships not served by the department, had 8,808 confirmed cases, along with 356 deaths. Non-Hispanic black residents suffered much higher rates, with 565 cases per 100,000 people, more than twice the rate of Hispanic/Latinos and more than triple the rate for non-Hispanic whites. In addition, non-Hispanic blacks are landing in the hospital at more than three times the rate of any other racial or ethnic group.

The south suburban region leads the others overall, with 469 COVID-19 cases per 100,000 people, versus 432 in the western suburbs, and less than 265 for the northern and southwestern regions.

Filling the gaping budget holes that have opened up for local governments such as Cook County and its many municipalities will depend on the federal government crafting an economic rescue package, Preckwinkle said.

She is uncertain whether that will happen, largely because the federal government has so far failed to develop a national strategy, leaving everyone to their own devices, she said. But even if it doesn’t arrive, all residents should remain committed to the shelter-in-place orders, no matter what the impact on anyone’s business or personal life.