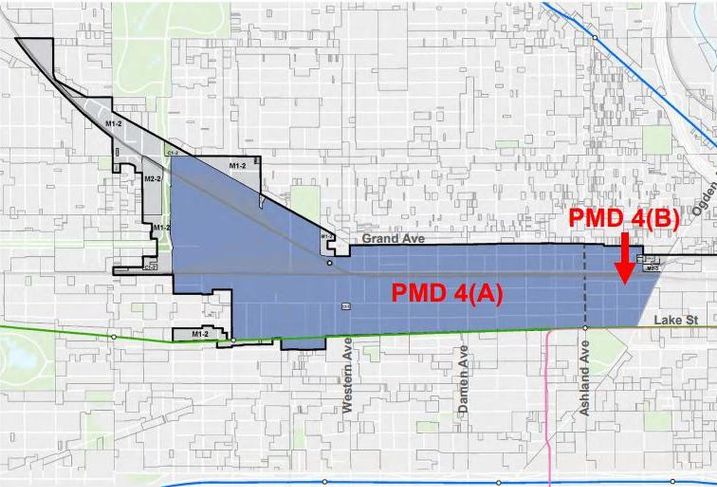 The Chicago Department of Planning and Development is proposing zoning changes to the Kinzie Planned Manufacturing District (PMD No. 4), which would allow for larger projects in the area bordering Fulton Market.

The city released its suggested changes at a meeting Tuesday night, Chicago Cityscape reports. Subarea B, between Ashland and Ogden avenues, would no longer have a maximum area for offices (though the floor area ratio limitation of 3.0 would remain) and would increase the maximum area for food and beverage sales from 3K SF to 8K SF, and maximum for eating and drinking establishments from 4K SF to 8K SF. Owners could apply for a variation on restaurants to go up to 12K SF.

Free-standing retail locations up to 3K SF would be allowed, a big change from stores only being acceptable as attachments to factories that make the goods sold in the stores. That rule has led to a boom of breweries, which can sell their beer for consumption on-site.

Subarea A, west of Ashland, would have no zoning changes, reportedly to protect industrial jobs in that area.

Very little development has happened in PMD No. 4 recently, Chicago Cityscape reports. Only two new building permits were filed in the last 12 months. That is a dramatic contrast with the adjacent Fulton Market and West Loop areas.

Deals have been moving west within Fulton Market, and area developers have started calling the Kinzie PMD area "Fulton Market West" or "West Fulton." Dayton Street Partners has been one of the most active investors in that area, recently buying a property in Subarea A, just west of Western Avenue. It also redeveloped 2101 West Carroll, 2137 West Walnut and 1500 West Carroll just west of Damen Avenue.