If you thought the Oscars had a lot of star power, you should've been in Bronzeville Friday for the groundbreaking of the Arts and Rec Center at Ellis Park. (You didn't need a tuxedo to get in either.) 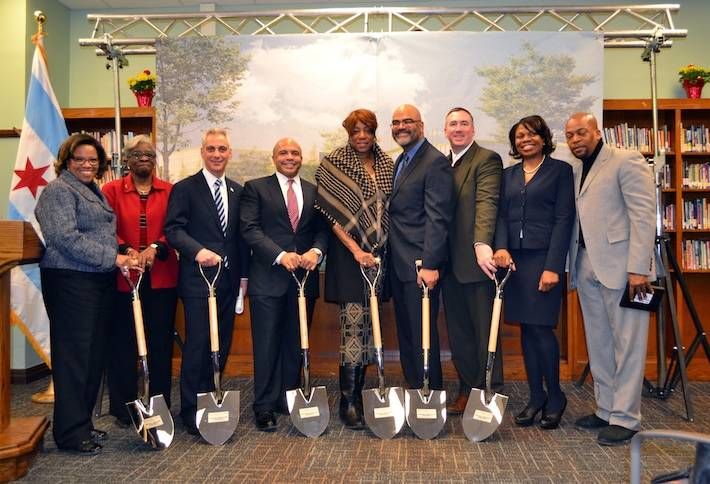 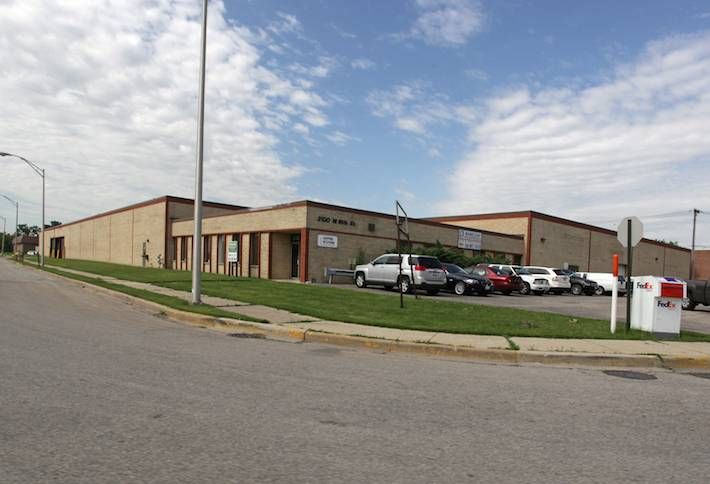 HSA Commercial Real Estate EVP and managing director Timothy Thompson repped Central Steel Fabricators in its $2.5M purchase of an 83k SF building (above) at 2100 W 16th St in Broadview. Central was forced to relocate after its Cicero facility was destroyed by a five-alarm fire on the adjacent property in January 2014. The Broadview facility was previously occupied and sold by Midwest Motorcycle Mechanics.

NAI Hiffman SVP Perry Higa repped Brainlab in a long-term renewal of its US HQ at Westbrook Corporate Center in Westchester. In June, the company will relocate to the 10th floor of Tower 5 and occupy over 25k SF of office space. Its marketing and education departments, as well as the tech showroom and classroom, will relocate to the Wrigley Building later this month. JLL’s Karla Harmon and Jeff Shay repped Westbrook Corporate Center.

Chicago Literacy Alliance, a nonprofit representing more than 90 Chicago-based literacy organizations, completed a lease of 38k SF on three floors at 641-651 W Lake St. The space will be called Literacenter, the first collaborative workspace in the US for groups advancing literacy initiatives. The building is owned by Loft Development Corp. Transwestern’s Larry Serota and Scott Becker repped the tenant in the lease. 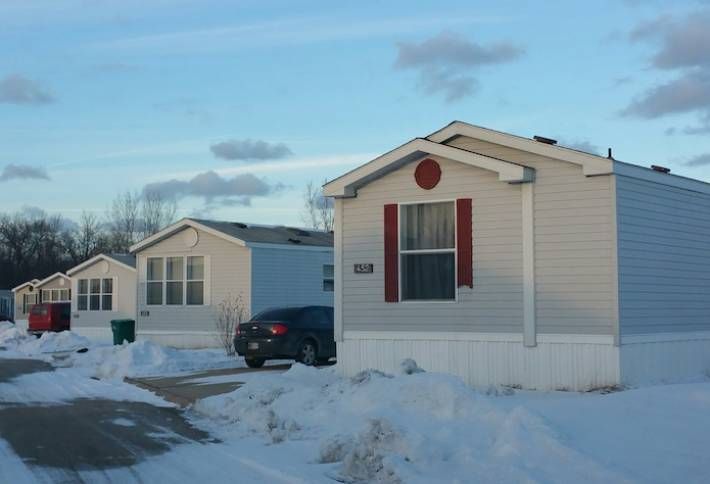 Associated Bank completed $12.8M in financing for retail and residential projects with Marc Realty, which includes $7.5M for the acquisition and repositioning of Pine Village, a 638-lot manufactured housing community (above) in Hobart, IN. The property is owned by Marc Realty and venture partner Ravinia Communities. Associated Bank SVP Ted Notz originated the loan and managed its closing.

Walker & Dunlop SVP John Pantone originated a $19M CMBS loan (provided by Walker & Dunlop Commercial Property Funding) for a 575k SF light manufacturing/warehouse facility in Alsip. The loan has a 10-year term and bears a 4.83% interest rate. The property was owned and occupied for decades by Crown Holdings. In 2006, Patriot Equities, the borrower, acquired the asset in a sale/leaseback. Crown Cork & Seal is now the primary tenant, leasing 74% of the space with a lease expiration in 2022. 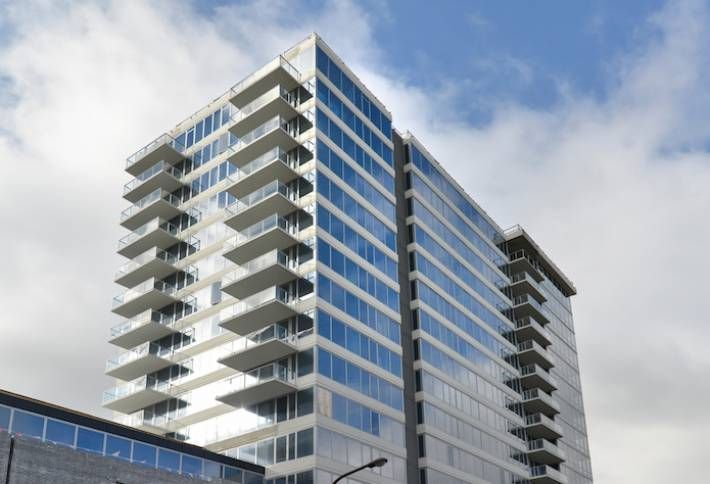 Co-developers Fifield Cos and Carroll Properties announced the opening of E2 (above), Evanston’s first uber-luxury apartment project with 356 units, including 12 rental townhouses. E2 consists of a 16-story tower at 1881 Oak Ave and a 14-story tower at 1890 Maple Ave, connected by a four-story structure including parking and a fourth-floor amenity deck (featuring a full-size basketball court, yoga studio, fitness center, and outdoor pool and spa). The building also includes 4k SF of ground-floor retail space.

Oxford Capital Group announced plans to open LondonHouse at 360 N Michigan, the corner of North Michigan Avenue and Wacker Drive, in spring 2016. The luxury lifestyle hotel will feature 452 rooms within the historic London Guarantee & Accident Building and a new 22-story Modernist glass tower designed by Goettsch Partners. The hotel’s name is a nod to the building’s name, as well as the renowned jazz club, London House, once located inside. The main entrance will be within the new glass tower. The refurbished cupola at the top of the building will be part of Chicago’s only tri-level hotel rooftop. Other hotel features include 25k SF of meeting and pre-function space and a spa and fitness center. 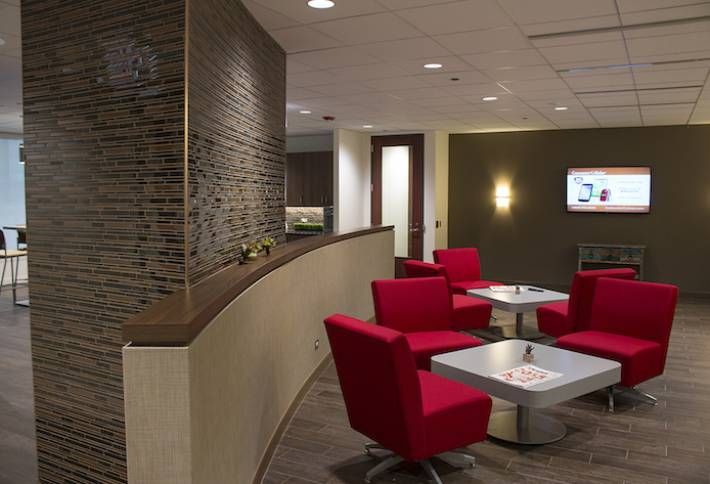 Amata completed renovations of its original office center, open for more than a decade, at 225 W Washington (above). The firm gutted all the offices and redid the café, conference rooms (adding giant multi-use Mondopad tablets) and other common areas to create a more open, modern feel. Next, Amata will renovate its location on the 28th floor of 150 N Michigan, with completion expected this summer. The space will feature similar upgrades, along with small team rooms and Amata’s signature cognac room, not previously available at the location.

First Hospitality Group president and COO Bob Habeeb was named the company’s next CEO. Current CEO Stephen Schwartz will focus on the company’s growth and development as founder and chairman. Bob has more than 25 years of high-profile, multi-unit experience in hotel, resort and F&B management. During his career, he has successfully operated hospitality businesses in almost every aspect of the industry, including luxury, select service, resort hotels, restaurants, and golf and ski operations.

MB Real Estate announced multiple promotions on its corporate services and tenant advisory team: Boris Yelyashov from VP to SVP; Kyle Robbins from AVP to VP; Craig McCaw from associate to AVP; and Christine Torres from associate to AVP. The team specializes in tenant rep in both the public and private sectors, along with site selection, lease administration, portfolio management and LEED consulting.

NAI Hiffman promoted Chris Gary from VP to SVP, Jason Wurtz from VP to SVP and Matt Novak from associate to senior associate. Chris joined the firm’s industrial services group in 2010 and focuses on properties in the Southern Chicago and Northwest Indiana suburban industrial markets. Jason joined the office services group in 2006 and focuses on repping owners in Chicago’s North and Northwest Suburban office markets. Matt joined the company in 2011 after spending time in the investment and development sector.

EnTrust Realty Advisors hired Drakia Wilkins as tenant rep associate, working with the executive team of the firm’s leasing division, EnTrust Tenant Advisors, to focus on repping entrepreneurial firms, including MBEs and WBEs, as well as non-profits and foundations. Drakia has interned and trained at firms including SOM, CBRE, Duke Realty and JLL and she received her MS in real estate from Roosevelt University, where she was a recipient of the prestigious Goldie B. Wolfe Miller Scholarship for Women in Real Estate.

Laura Langer joined Kiser Institutional Group as associate. She was most recently a project manager overseeing vintage high-rise rehabs for HA Langer & Associates, her family’s firm that owns and manages 1,500 apartments in the Chicago area. Laura has a degree in finance with a specialty in real estate from ISU.

200 W Madison has become the second building in Chicago to earn the Certified Sustainable Property certification from IREM. Owned by $7B open-end real estate equity fund Multi-Employer Property Trust (advised by Bentall Kennedy) and operated by Transwestern, the building has shown continuous attention to energy management efforts and best practices employed the the building team resulted in the 1980’s property achieving high energy ratings. The building was able to complete the process quickly thanks to policies and procedures in place through its LEED Silver certification.