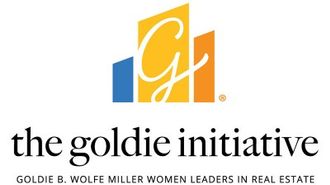 The Goldie Initiative has been working to change the face of commercial real estate for more than a decade. Since 2007, the organization has shined a light on the tremendous female talent in the industry and advanced the careers of promising young women through CRE scholarships, mentoring programs, leadership development and networking opportunities.

Founded by prominent CRE broker and entrepreneur Goldie B. Wolfe Miller, The Goldie Initiative’s mission has always been clear, and so has its biggest challenge: How to best promote the accomplishments and voices of women in CRE.

“The main question has always been: 'How can we get the word out about The Goldie Initiative?',” Goldie Initiative Executive Director Megan Abraham said. “It’s not just about raising money for our scholarships and programs, it’s also about ensuring women’s voices are being heard in this industry.”

To achieve these goals, the organization created the Goldie Gala in 2017, an annual event where hundreds of CRE professionals gather to network, celebrate prominent women in the industry and raise money for the Initiative. It is also where they present the Shero Award to a woman who has made a positive impact on CRE and is setting an example for future generations. This year's honoree is Karen Case, executive managing director and president of U.S. commercial real estate for CIBC U.S.

While the Goldie Gala continues to be a success, Abraham said the organization is still constantly looking for ways to promote the important work it is doing.

“Bisnow has done a great job promoting the Goldie Gala on its digital platform and we, in turn, have been able to recommend smart, accomplished women for panels who have gone on to steal the show at Bisnow events,” Abraham said.

One of these women is Nicole Pecoulas, a senior investment officer at Barings Real Estate. Pecoulas has been part of The Goldie Initiative mentorship program for 11 years, and she spoke earlier this year at Bisnow’s Chicago Opportunity Zones event. Abraham said Pecoulas brought unique insights and female perspective to what was previously an all-male panel.

“For me, it’s all about advancing women in commercial real estate,” Pecoulas said. “We need more women speakers at CRE events, and it was really encouraging to get a call from Megan saying she had recommended me. I enjoyed networking with the other panelists and it gave me great exposure.”

After the event, an attendee came up and thanked Pecoulas for bringing female representation and a different viewpoint to the panel. Pecoulas is scheduled to speak at another OZ event later this month.

The organization's suggestions helped Bisnow create a vibrant, successful event. Bisnow, in turn, has been spreading the word about The Goldie Initiative and its mission to people who may be interested in supporting its goals.

Patrick Healey, senior vice president at Marsh and McLennan Cos., attended the Power Women event and was so inspired by Wolfe Miller's speech he reached out and got involved. He is now a vice chair for this year's Goldie Gala.

“I technically operate in the insurance industry, but I focus on CRE owners and managers,” Healey said. “Working with The Goldie Initiative has been a great way for me to immerse myself in the industry while helping to promote a great cause.”

Urban Innovations President Jo Anne Gottfried was also present at the Power Women event and was later surprised to get a call from Wolfe Miller, who had read about Gottfried in a Bisnow article and asked her to become a vice chair for the gala.

“Networking is so important in this industry, and The Goldie Initiative is doing a great job connecting and mentoring young women and highlighting all of the opportunities there are for women in CRE,” Gottfried said.

Abraham said what started as a plan to spread the word about a gala honoring women in real estate has spawned into a series of strong relationships that are connecting people to The Goldie Initiative while spurring the effort to make sure women’s perspectives are heard at events and in CRE news.

“When we first started the Goldie Gala in 2017, it was a real struggle for us to get media coverage about the event,” Abraham said. “Now, as a result of these partnerships, we have greater exposure and have become a go-to place real estate organizations turn to when they want greater gender representation in their articles and on their panels.”

This feature was produced in collaboration between Bisnow Branded Content and The Goldie Initiative. Bisnow news staff was not involved in the production of this content.