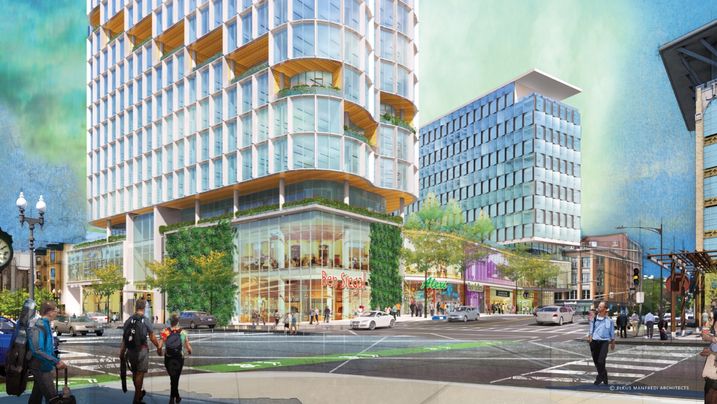 A developer is trying to execute an air rights project in Back Bay where others have stalled, but this one thinks it has the recipe for success.

Samuels & Associates filed plans with the Boston Planning & Development Agency to move forward with a two-tower, mixed-use air rights project on Parcel 12 on the western side of Massachusetts Avenue where it intersects with Boylston and Newbury streets. A 237-foot office tower would be closer to Boylston Street, while a 154-foot tower that will be either residential or a hotel would be closer to Newbury Street.

“We’re moving forward on this now because we spent a long time studying these issues with MassDOT,” Samuels & Associates Senior Vice President of Development Abe Menzin said. “We’ve done a ton of legwork recently and are feeling good with the technical side of things.”

Developers have struggled for years on how to go about decking and developing over the Mass Pike. Plans fizzled in 2010 for the Columbus Center, a planned $800M air rights project that would have connected the Back Bay and South End neighborhoods over the Mass Pike between Arlington and Clarendon streets. Developers cited economic infeasibility as the reason for ditching the plan.

A similar plan in Fenway, dubbed the Fenway Center, stalled for years until developer Meredith Management moved forward a residential component of the development in July 2017. The first phase of the Fenway Center will be built on land adjacent to the highway, and the more difficult decking part is expected to come later.

Menzin does not expect similar delays on the Parcel 12 project and indicated Samuels would even build without an office tenant lined up.

“We’re really not of the waiting mindset,” he said.

An on-ramp for the Mass Pike currently at Massachusetts Avenue and Newbury Street would be relocated further west on Newbury in a move the developer says is aimed at reconnecting the Fenway, Back Bay and South End neighborhoods with the project. The project would also include building a new connection to the Hynes MBTA station.

This stretch of the city is where several developers are competing to be the first development to be built over the busy highway since Copley Place in the 1970s.

Peebles Corp. won the rights to develop across the street from the Samuels site in 2015. The developer, which has offices in New York, D.C. and Miami, has remained quiet on its proposed 400K SF Viola Back Bay project until the last few weeks, when it filed revised plans with the city.

Farther down Boylston, developer Weiner Ventures is pushing a scaled-back plan at 1000 Boylston St. The 484-foot condo tower could break ground by the end of 2018.

The Samuels project’s visibility to both car and pedestrian traffic has the developer aiming to make it a new gateway to the city. The property is visible to 50 million people each year on the Mass Pike and 25 million pedestrians who walk along Massachusetts Avenue or Boylston and Newbury streets.

“From a civic perspective, it’s the most transformative project we’ll have the opportunity to undertake,” Menzin said.