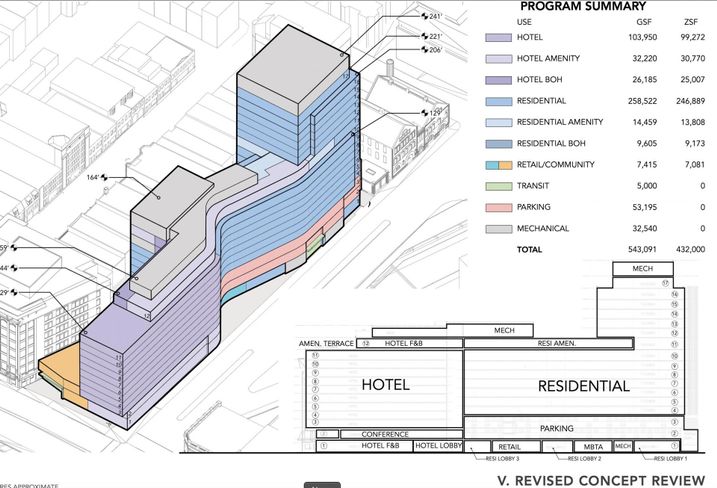 Some things aren’t negotiable when it comes to building a complicated mixed-use project over one of Boston’s most active highways.

Five years after winning the air rights to develop Parcel 13 over the Massachusetts Turnpike and next to Back Bay’s Hynes Station, New York City-based The Peebles Corp. is moving ahead. Originally dubbed The Viola, the project is slated to include a luxury hotel, condos, retail, an upgraded MBTA station and a 200-space parking garage, according to a letter of intent filed with the Boston Planning & Development Agency on behalf of Peebles earlier this month by Charlestown-based project manager Trademark Partners.

Representatives with Peebles Corp. and Trademark met with Back Bay neighbors last Tuesday at a community meeting to launch the public review process. While the developers noted the project is not set in stone, they said they need a certain level of density to make the project pencil out.

“We don’t need to have height, but we need to have area,” Trademark partner Mark Rosenshein said at the meeting. “I must have 432K SF in this project.”

The proposal calls for heights ranging between 145 feet closest to Massachusetts Avenue to 221 feet at the side closer to the Hynes Convention Center. Height-averse residents at last week’s meeting questioned the development team on the possibility of reducing the amount of parking to give up some height, given how the project sits directly over a mass transit station. Rosenshein said he was willing to explore alternatives but also said the development team has to meet minimum parking requirements.

The development team repeatedly reminded residents this was just the launch of the public review and the project is subject to change as it goes through the process.

The Parcel 13 development plan comes as work is expected to begin soon across the street on Parcel 12, a Samuels & Associates mixed-use development over the Mass. Pike where CarGurus plans to move its headquarters. In the Fenway neighborhood, Meredith Management Corp. plans to begin foundation work later this year over the Pike for the next phase of its Fenway Center mixed-use development.

Another planned air rights development, between former development partners Weiner Ventures and Suffolk, across the street to the south of Parcel 13 was called off last year and has since spawned a heated battle between the developers in court.

Peebles Corp. CEO Don Peebles said his project would join the list of those moving forward.

“This is something we have been involved in a very long time. I enjoy this part of the process,” Peebles said. “We’re not going to get to a point where we’ve spent a huge amount of money and not cross the finish line.”