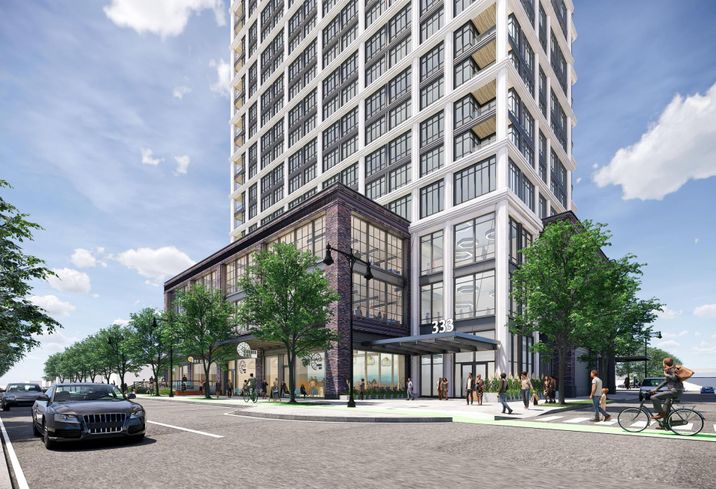 A Dorchester Avenue mixed-use proposal could add hundreds of residential units in the burgeoning development corridor between the Broadway and Andrew Red Line stations in South Boston.

National Development filed a project notification form Friday on a $210M mixed-use proposal at 323-345 Dorchester Ave. in Southie. The developer is pitching a 21-story, 317K SF building with 265 apartments on the upper floors, 47K SF of office on the second and third floors, and a 10K SF grocery and a 4,500 SF restaurant as the ground-floor retail component.

“As we move forward with the next step in the public approval process, we’re eager to continue working closely with neighbors in South Boston on our plans for this new extension of the community,” National Development Managing Partner Ed Marsteiner said in a prepared statement. “Demand to work and live in this neighborhood has never been higher, and we are planning for the next generation of this area to meet the needs of both current and future residents.”

The Elkus Manfredi-designed tower is the first in a multiphased development planned on a 5.4-acre site National Development owns, according to the filing. As many as three additional phases are planned.

National Development also announced plans last year for a redevelopment of the Cole Hersee building across the street from the 323-345 Dorchester Ave. proposal on Old Colony Avenue. Tatte Bakery is slated to be the 30K SF anchor tenant at that project.

The surrounding Dorchester Avenue corridor is on track to be one of South Boston’s most active construction zones.

The South Boston Dorchester Avenue Planning Initiative, launched in 2015 by the Boston Planning & Development Agency, includes the possibility of rezoning the area to allow heights as tall as 300 feet. Single-story auto repair shops and warehouses make up much of the existing building stock.

Samuels & Associates is developing Washington Village, a planned 656-unit residential between Dorchester and Old Colony avenues. To the west, city officials are pursuing an eventual redevelopment of Widett Circle, an industrial pocket previously pitched as a site for a 2024 Summer Olympics stadium and a new soccer stadium for the New England Revolution.