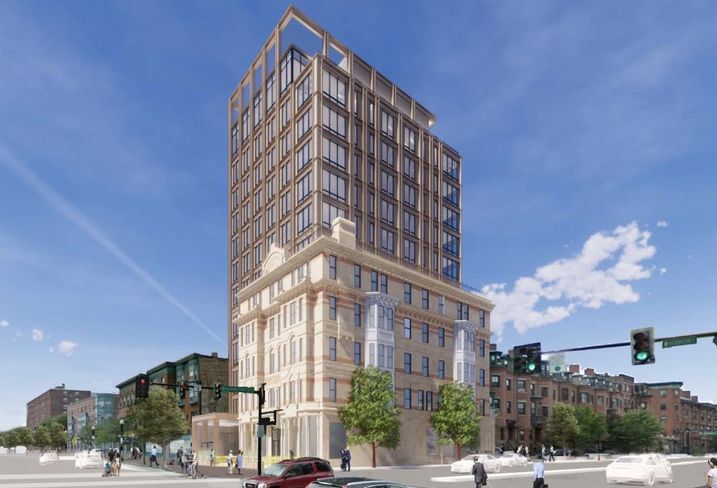 Good luck may have finally arrived for a notoriously neglected South End landmark.

Developers Jas Bhogal, Thomas Calus and Nick Colavito, working under the name Alexandra Partners, submitted detailed plans with the Boston Planning & Development Agency to redevelop and expand the Alexandra Hotel building at Washington Street and Massachusetts Avenue in the South End. The project, which will include a 12-story addition on a vacant lot next to the existing building, would result in a 150-room boutique hotel.

The CBT-designed redevelopment would entail relocating an outbound Silver Line stop from in front of the hotel on Washington Street farther down the block, to Northampton Street, at the request of neighbors to prevent bus traffic, according to the filing. While the developers indicated they will restore the original five-story building facade, years of neglect and water damage require the rest of the building to be replaced during construction.

The proposal calls for a ground-floor café and restaurant, meeting space, a two-story lobby and a rooftop bar and restaurant that would overlook the city. The developer anticipates 275 construction jobs and roughly 75 permanent jobs to result from the overall project.

The Alexandra Hotel was built in 1875 and, while it originally catered to wealthy hotel guests, fell out of grace when the Orange Line was built outside its front door along the railway’s original elevated path down Washington Street. Even after the Orange Line was taken down, the property largely sat empty and suffered from a series of fires that closed off the building's upper floors.

Trying to find new life for it has been at the top of several South End neighborhood groups' wish lists, but the cost to renovate it has stymied several suitors. The Church of Scientology bought the building in 2008 in hopes of making it a new Boston headquarters. The church put the building on the market in 2014 after failing to raise the $17M it said was required to bring the property into working order.

Talks with two potential developers stalled in May 2017. Eric Hoagland, the son of CVS founder Ralph Hoagland, was reportedly in talks to purchase the building later that year but stressed it would take time to close a deal. The current development team was first reported in August after filing a letter of intent to the BPDA.