American Campus Communities CEO Bill Bayless was a resident assistant in college and has never left the campus environment.

Bill (here with his wife Jamie) tells us he got into student housing right out of college because he loved the idea of impacting an emerging industry. (Few people were in the sector in the '80s.) He's spent his entire career in student housing, including co-founding ACC in 1993. He tells us his most challenging deal was taking the firm public in '04 (the first student housing company to do so). It was the first time Wall Street was exposed to student housing as a mainstream investment, and there were no metrics or data. (We picture the SEC watching Animal House in lieu of having financial charts.) 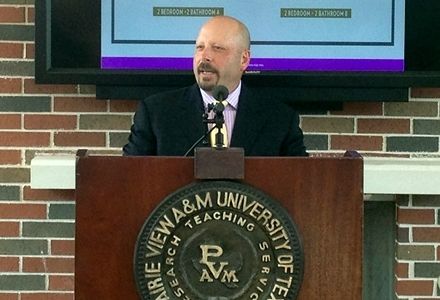 Bill says ACC's scale today is beyond anything he ever imagined. Since '96, it's developed over $4.2B and acquired over $4.6B in student housing assets. It boasts over 3,000 employees, 165 communities owned in 42 states, and 199 properties under third-party management. (Combined, they house nearly 250,000 students.) He's particularly proud of how ACC has become a benchmark in the industry, especially for on-campus private housing. The firm has some big projects ongoing in this arena, including one under development at Princeton.

Outside of work, Bill (smiling with his granddaughter) likes being involved in health and fitness, including frequenting the gym his son owns. He loves golf, but his handicap isn't great, which is probably one of the reasons ACC has been so successful. He tells us his personal motto is "if it's to be, it's up to me." One of his coaches growing up said it to remind him he controls his own destiny. He passed that on to his children, repeating it so often that his son got it tattooed on his arm. (A mixed blessing for Bill, since he doesn't like tattoos.)