Retail Is Growing In Georgia, And It Has Everything To Do With Food 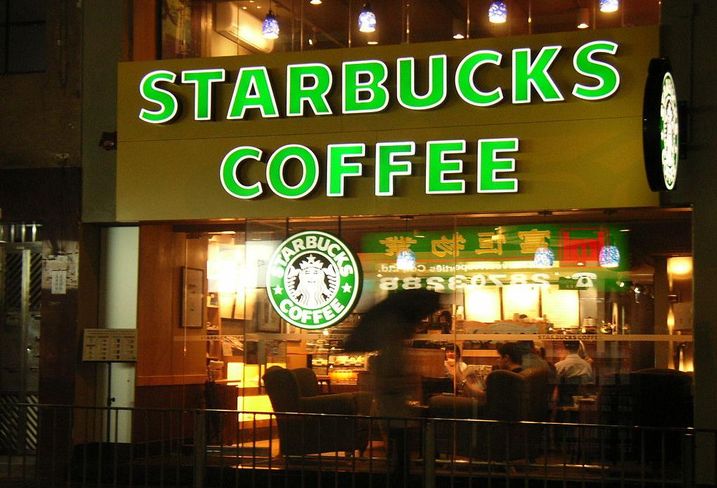 More than 100 national retailers have plans to expand store counts in Georgia over the next decade, led mainly by Starbucks and Domino's, according to a new study by Newmark Knight Frank.

NKF examined planned store growth expansion by 9,000 national retailers compiled by Chain Store Age. Retailers are looking to open more than 4,400 new store units in the United States over the next 10 years, according to NKF. Starbucks leads the pack with plans for more than 2,000 new stores over the next decade, NKF Research Director Marianne Skorupski said.

Domino's is eyeing 300 new locations and German discount grocery chain Aldi more than 200 over the next 10 years, Skorupski said. Other prolific chain concepts include Tropical Smoothie Café and Wingstop. NKF did not have specific unit numbers for the state of Georgia.

“This is like Super Bowl food, really,” Skorupski said.

But restaurants make up 83.9% of the planned new chain retail stores in Georgia, far outpacing average new eatery growth across the U.S. Chain restaurant growth is expected to account for 65% of total new retail store growth in the U.S. over the next decade, according to NKF.

With Georgia's growing population and economic influence, the state being so heavily targeted by chain restaurants makes a lot of sense, Skorupski said.

“At the end of the day, people will always be consuming food," she said. 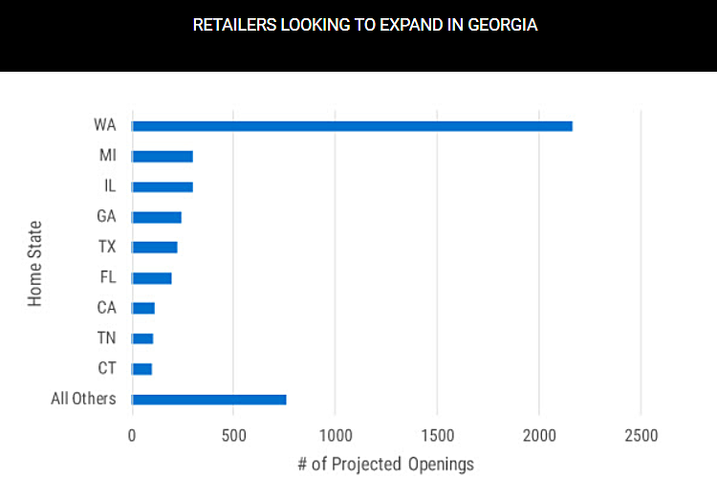 Courtesy of Newmark Knight Frank
Projected store openings among chain retailers in top U.S. states over the next decade

Starbucks' growth coincides with the coffee purveyor's turnaround in store performance. In November, the company reported that same-store sales growth jumped 4% during the fourth quarter, the strongest level of existing sales growth in over a year for the company.

While many soft good retailers have been struggling to survive an online shopping-driven world, restaurants have been a different story. Many are largely protected from the likes of Amazon, and many eateries — everything from high-end, farm-to-table dining on down to fast-casual and fast-food — have experienced increasing sales as more people prefer to eat out than cook at home.

Through 2018, the restaurant industry experienced nine consecutive years of revenue growth with sales hitting $825B last year, or 4% growth, according to the National Restaurant Association. Those factors have pushed many restaurant chains to grow their store counts.

“There is abundant capital available for chains to expand, and everyone is looking for the next Chipotle, Starbucks and McDonald's,” The Shumacher Group founder Harold Shumacher said.

Many fast-food and fast-casual chains are experiencing a burst in sales thanks to services like Grubhub and Uber Eats, Skorupski said. This growth could go a ways to helping alleviate some of the vacancies in smaller strip centers from the fallout of various retailer bankruptcies in recent years.

“There's so much older retail that's sitting empty that a Domino's could go into,” she said. 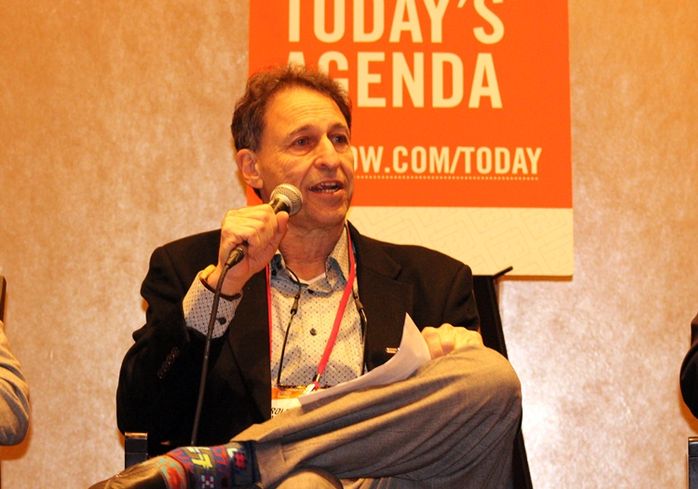 But, in Georgia, there are headwinds, some that may make this projected growth more wish than promise.

“Right now, expansion in Georgia would be hampered by the fact that occupancy is high,” Agile Commercial Real Estate Managing Partner Mike Neal said. "It would be difficult for that many tenants to grow in Georgia."

Ever since the Great Recession, development of new retail space has been limited in Metro Atlanta. According to Marcus & Millichap, retail absorption — despite headline-making closures — has outpaced new store delivery every year since 2012. As of the second half of 2018, retail vacancies in Metro Atlanta dipped below 6%. Retail landlords in the heart of the city are even seeing vacancy rates as low as 3.1%, according to Marcus & Millichap.

Neal said the state's economic growth and its prospects, with new businesses and residents moving in, is bait on the fishing line for retailers. But finding that right landing spot is increasingly difficult. He said he is working with one out-of-state coffee concept that is struggling to find the right location for its metro area debut.

“I don't know that there are that many opportunities for that many people to expand in Georgia,” he said. "I just don't see how you can do that."

The tight marketplace is compounded by a crowded playing field. While overall sales for restaurants continues to grow in Metro Atlanta, that success is not shared by all, according to NetFinancials, an accounting firm that tracks restaurant performance locally.

In its quarterly survey of more than 100 non-chain local restaurants, NetFinancials saw 0.88% same-store restaurant sales growth in Atlanta compared to the national average of 1.2% through the third quarter of 2018. Of those surveyed, only half of restaurants reported an actual revenue increase, according to NetFinancials.

During that time, 655 new restaurants opened in Metro Atlanta, an 11% jump from 2017, according to the report.

At least one chain has even bowed out of the Atlanta restaurant fray, with Pollo Tropical throwing in the towel earlier this year.

“Restaurants have been, for a number of years, the darling of the retail industry,” Shumacher said. “The only question becomes … How many more can we have or need? For the most part across the country, restaurant sales have slowed down some.”

CORRECTION, FEB. 8, 5:30 P.M. ET: Future store growth numbers for Starbucks, Aldi and Domino's, as originally reported by Newmark Knight Frank, represent growth plans for the entire country and not just Georgia. The story has been updated.