In Its Infancy, Bioscience Industry Poised To Boom In Atlanta's Office Market

Thanks to a robust university infused with millions of dollars in public funding and an influx of talent moving to the city every day, Atlanta could be on the cusp of becoming a big player in biotechnology. 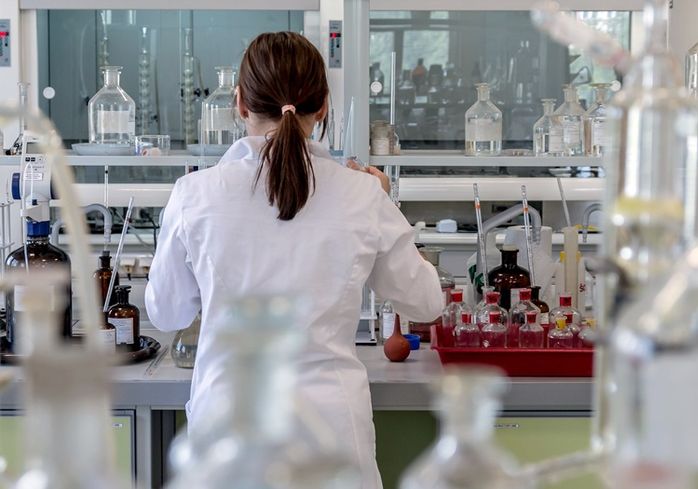 Michal Jarmoluk/Pixabay
An example of a laboratory used in the life sciences industry.

But the industry has yet to create a new pill for office landlords to swallow to fill spaces.

“Many people in the industry are looking for the next emerging hub around the United States, and Atlanta has a lot of the right ingredients in the future to take a greater role,” CBRE Research Director Ian Anderson said.

Much of Atlanta's mounting influence in the industry owes thanks to Emory University, Anderson said. According to CBRE data, more than $734M in 2018 went to the institution for bioscience and life science research funding, including $331M in funding from the National Institutes of Health.

That made Emory among the 20 top institutions in the U.S. for NIH funding. (Johns Hopkins University was first with $663M.) The remainder of the funding for life sciences at Emory came from private sources, Anderson said.

Atlanta also saw more than 2,000 bioscience and biomedical graduates between 2016 and 2017, as well as 144 doctorates, making Atlanta the 10th-largest market producing life science talent behind Philadelphia and San Diego. 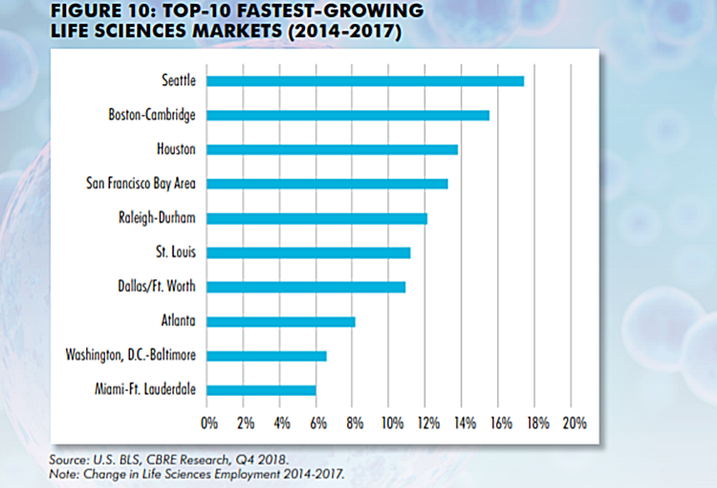 Courtesy of CBRE and the U.S. Bureau of Labor Statistics
Atlanta grew its life science industry by 8% in terms of employment between 2014 and 2017.

These are underpinnings that could bode well for Atlanta as the life science industry is projected to continue its upward trajectory for the foreseeable future.

According to a recent Deloitte report, prescription drug sales are expected to rise from $900B this year to $1.2 trillion in 2024, fueled in part by novel therapies that are attempting to address unmet needs, as well as increased access to medicine.

“Atlanta is a growing hub for pharmaceutical and biotech companies,” Ackerman & Co. President Kris Miller wrote in an email. "This sector did not suffer a downturn like other industries during the Great Recession."

Recently, Ackerman leased 19,200 SF to the National Blood Testing Cooperative at one of its facilities in Stone Mountain Industrial Park. Several more life science companies are actively looking for office space in the market, Miller said.

It is difficult to determine the current impact life sciences has on the Atlanta office market. Of the more than 225M SF of office space throughout Metro Atlanta, some 26M SF is slated as space used for life sciences, according to Reonomy. The company tracks the data per building and does not break out how much space in each building is specifically used by life science tenants, so actual life science use may be a fraction of that.

But the real impact that the life science industry could have on Atlanta — a similar boom to the nearly full Boston or San Francisco lab markets — is still perhaps years away, SK Commercial President Tom Kirbo said.

Anderson said as long as the industry continues to blossom here, they may be apt to cluster in communities, much like Atlanta's numerous healthcare players have done in the hospital conglomeration known as Pill Hill in Central Perimeter.

“[Atlanta] is one of those markets where you may begin to see a laboratory cluster,” he said. “Life sciences is one of those industries that has an extremely attractive long-term growth trajectory. Literally, the experts and others foresee this industry growing for the rest of this century. So this is a decades-long expansion.”