Onstage in the Shakespeare Theatre's Harman Hall this week were some of DC's best actors: members of Congress. 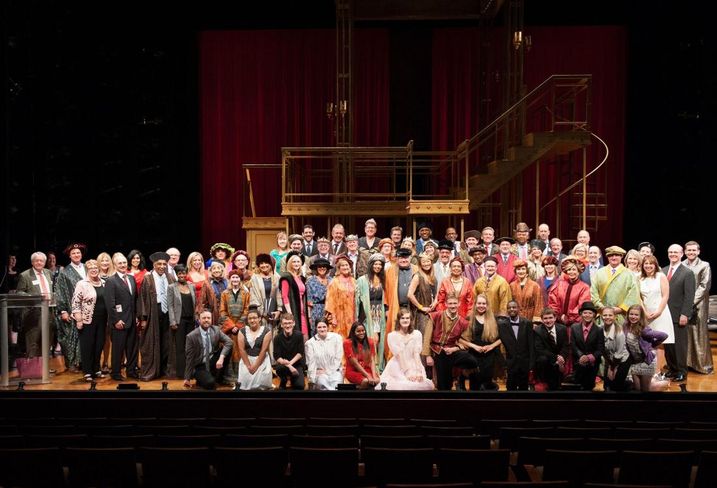 For the past 14 years, the popular Will on the Hill has brought together theater buffs, policy wonks, lawyers and members from both sides of the aisle in a way that's possible only in DC.

This year's performance of Heavy Lies the Head, an original play by Peter Byrne, featured more than 20 Congress members, including Sen. Chris Coons, Rep. Eleanor Holmes Norton and Rep. Mike Turner, in addition to cast members such as British Ambassador to the US Kim Darroch, Assistant USTR Christina Sevilla and The Hill editor-in-chief Bob Cusack.

The evening started by paying tribute to the victims of the Orlando tragedy and their families. "Our theater community is one that embraces all," said STC executive director Chris Jennings. "I can say for all of us: Orlando, we are with you." 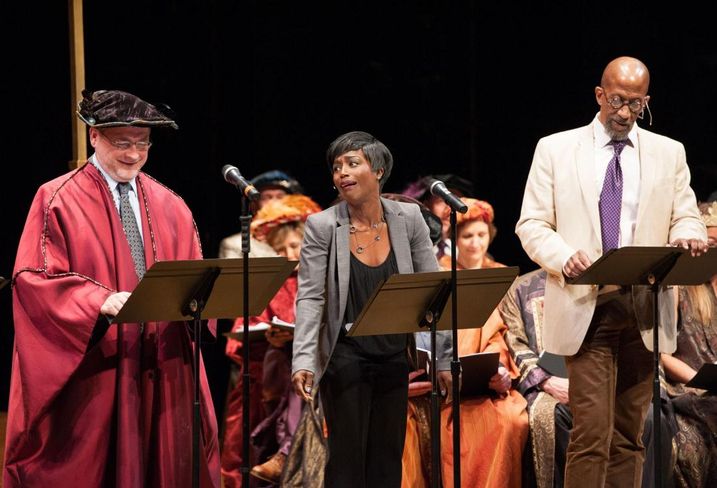 "In Washington, we have a little quirk—we measure those around us by their work," begins Heavy Lies the Head.

The show is centered around the joyful resignation of the Speaker of the House—also known as "the worst job in Washington." (His retirement is about as surprising as "hearing that the Cubs didn’t make it to the Series.") The Speaker quotes from Othello: "If after every tempest come such calms / May the winds blow till they have wakened death! / If it were now to die, 'twere now to be most happy."

Two "fixers" hired by the Chief Whip search for a replacement. It makes the perfect setup for cycling through a variety of DC players, poking fun at each with Shakespearean quips.

Performers don elaborate robes and headgear, as seen here on Grover Norquist. He's with actors Felicia Curry (who played the left-wing "fixer") and Reg E. Cathey (an Emmy-winning actor for his work on House of Cards, who played the Chief Whip). STC Affiliated Artist Tom Story played the right-wing fixer.

The fixers (described as the result of mixing "a plumber with a bagman with a spin doctor in a petri dish") encounter characters including Washington insiders ("I listen at keyholes, and sell what I hear. My name is not important, as it will never appear in print. My birth certificate reads 'Deep Background.'”) and political bloggers ("We're the first to report, the last to retract."). 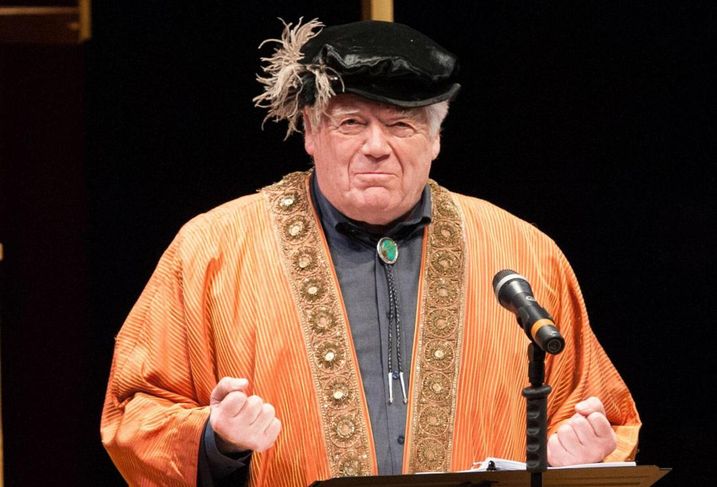 It's impossible to fill the Speaker role, the fixers find: complaining Congress members refuse, realizing that "someone is about to be more miserable than we are"; a hedge fund manager played by Rep. Jim McDermott (above) demands $20B in exchange for taking the job ("Don't worry, it'll trickle down eventually," he starts to say before bursting into laughter); and an attempt to put in a federal judge fails when the Freedom Caucus enters to nix the idea of judicial appointments.

The fixers try to get the opinions of online activists, who suggest Beyoncé for Speaker. When one activist gets angry, he takes a page from Coriolanus to say to the others, "Thou wretch, despite overwhelm thee! / Hence, rotten thing! or I shall shake thy bones /Out of thy garments. Hashtag Shut it!"

Lobbyists give their input and end up putting a modern spin on a classic quote from The Merchant of Venice. "Why does everyone think that it’s OK to make fun of lobbyists? We’re human beings, after all...If you prick us, do we not bleed? if you tickle us, do we not laugh? If you deny us subsidies and bailouts, do we not lose our second house in the Hamptons?"

Finally, an idealistic young Washington intern (who admits "that's not a job title, that's a punchline") shows up to work in the Speaker's office. Finding that he has skedaddled, she accepts the job herself so she can help people (and get health insurance). 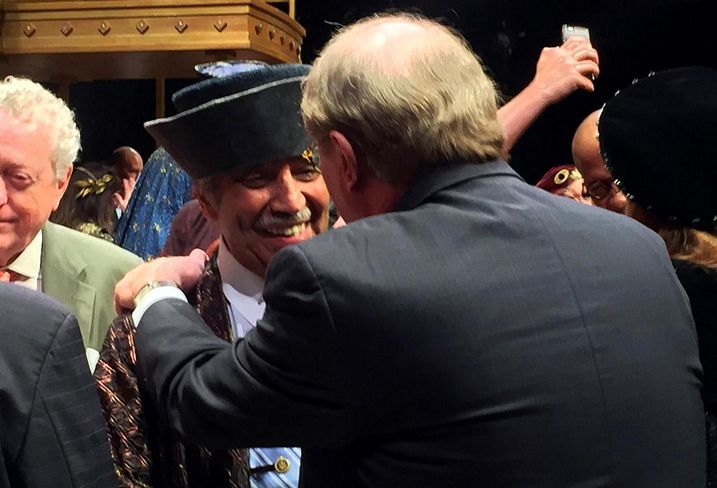 Along the way, there are friendly digs at the Freedom Caucus ("less of a Caucus and more of a mosh pit," "they don’t know what they want, they just don’t want anyone else to have anything"), Washington ("Waiters run this city...We're the folks who bring the booze!), Trump ("He Who Must Not Be Named"), the 2016 election, Segway tours, Metro repairs, "Escalefters" and Keystone XL.

Not to mention, Conservatives ("I have the John Galt speech stitched into my pillow."), Liberals ("All you have to do is share a John Oliver video and feel superior about it. Tada! You're a liberal."), moderates ("Hey, this is Washington—if we wanted to make the moderates happy, we’d acknowledge their existence."), and the reason political parties might not really want to win: "whatever advantage our side gains by getting the job" is negated by "the disaster that will follow."

The show ends on a positive note: "Shakespeare is the model for any leader of a great and diverse people. He gave voices to the rich and the poor, the powerful and the powerless. He showed us they all matter—they all have to be heard."

Afterward, we snapped Intuit Chief Public Policy Officer and Will on the Hill co-chairman Bernie McKay greeting Rep. Charlie Rangel. Both Rep. Rangel and Rep. Jim McDermott are retiring and were given ties crafted by STC's costume designer to commemorate their last Will on the Hill as members. (A bowtie for Rangel, a bolo for McDermott.) McDermott has performed in Will on the Hill for 14 years. 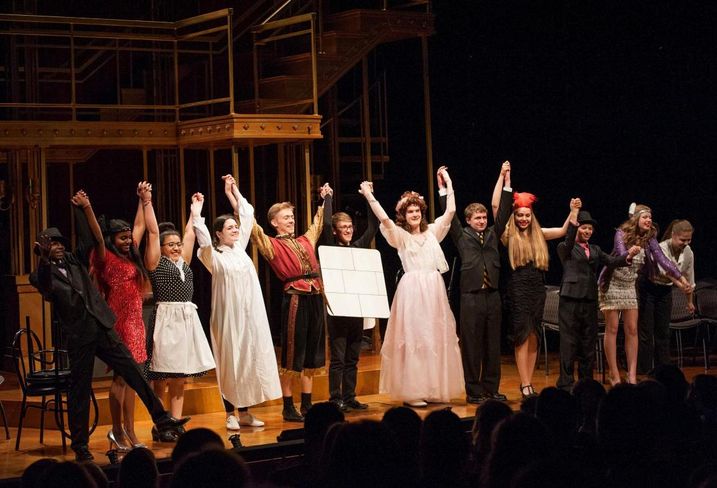 "We take our role as a community educator seriously," said Will on the Hill committee member and McDermott government strategies practice head Steve Ryan.

It's important to STC "that all kids feel at home here, that culture is not defined by access." 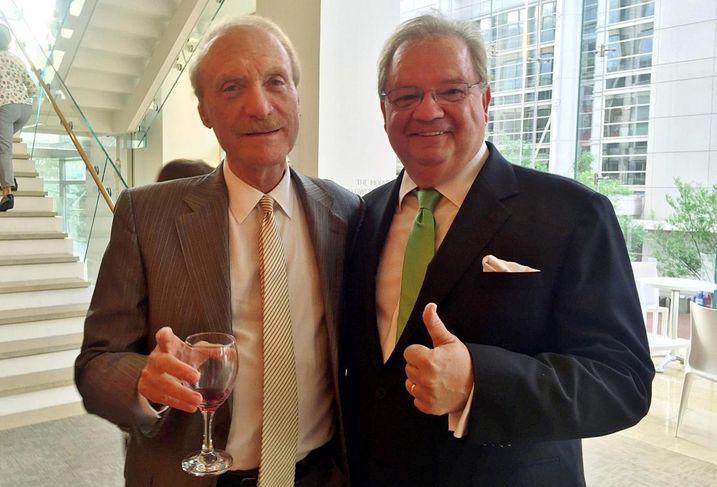 These two Will on the Hill steering committee members gave the show a thumbs-up.

Jonathan Yarowsky co-chairs WilmerHale's legislative affairs and public policy practice and previously served as Special Counsel to President Clinton and GC of the House Committee on the Judiciary. 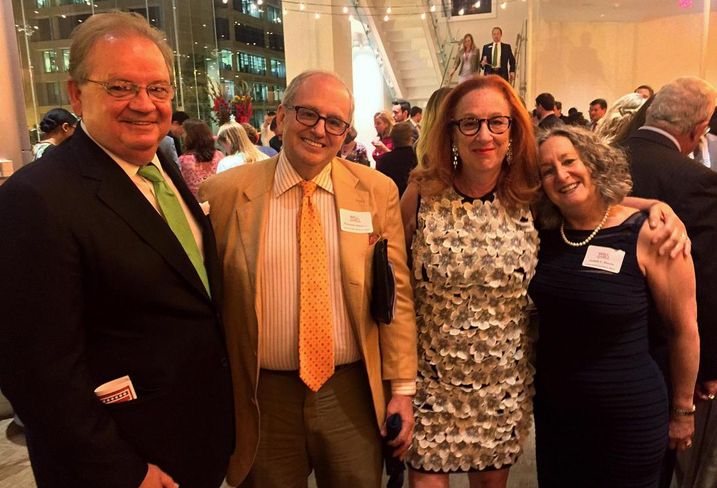 Last summer, Norm and Judy established the Matthew H. Ornstein Washington Summer Debate Camp in honor of their son. The debate camp, hosted by the Washington Urban Debate League, has its second session coming up this August. 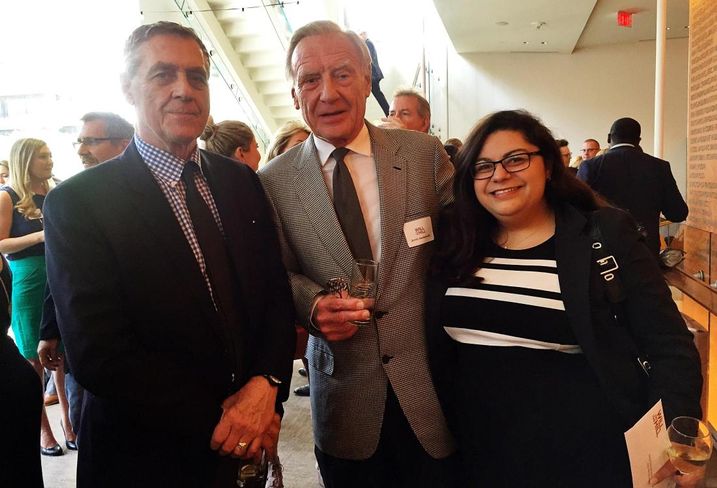 Here are former National Association of Manufacturers president and Will on the Hill steering committee member Jerry Jasinowski, flanked by George Deshensky and Claire Jabbour. 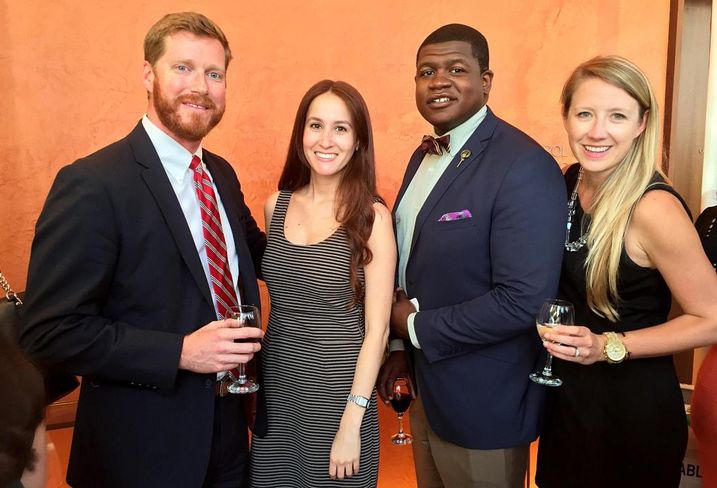 During a cocktail reception before the show, guests sipped drinks and snacked on hors d'oeuvres like fried mac and cheese balls and chilled asparagus soup with quinoa crunch and micro greens.