When The Sun Sets in Las Vegas, It's Time To Party At ICSC RECon

Courtesy of Rappaport
H&R Retail, KLNB, Kimco Realty, Peterson Cos. and Rappaport threw the first Retail Revelry in the DMV, a new party celebrating retail real estate in the Washington, D.C., Maryland and Virginia market, during the second day of the ICSC RECon at the Bellagio Grand Terrace and Pool in Las Vegas.

As red, blue and purple lights illuminated the Bellagio poolside floor, aerial acrobats balanced on a half-moon-shaped pole and Taylor Swift’s “Shake It Off” played over loudspeakers, hundreds of ICSC RECon attendees were letting loose at the first Retail Revelry in the DMV, a party celebrating the retail real estate community in the D.C., Maryland and Virginia market.

Sponsored by H&R Retail, KLNB, Kimco Realty, Peterson Cos. and Rappaport, the event held at the Bellagio grand terrace and pool brought out notable executives and other retail decision-makers from the D.C. metropolitan area.

Bisnow served as the media sponsor of the event.

The party, held on Day 2 of the convention, was one of several parties and gatherings held after a full day of educational seminars and meetings during ICSC RECon Las Vegas, a four-day convention considered the largest retail real estate gathering in the world.

Retail Revelry in the DMV attracted more than 1,200 people, according to party organizers. For many longtime RECon attendees, once each day ends and the sun sets, the networking, parties and get-togethers begin.

That is when people can take a deep breath, relax, enjoy the moment and, most importantly, get to know some of their colleagues on a more personal level, Peterson Cos. President Paul Weinschenk said.

“The significance of these parties is that it is a great way to have conversations with people that's not in a transaction setting, build relationships on a one-to-one basis and to have that human connection," Weinschenk said.

Weinschenk has attended RECon the past 25 years. At every party he attends, he walks in a loop to check out the scene but usually, as he makes his round, a funny thing happens.

Courtesy of Rappaport
Hundreds attended H&R Retail, KLNB, Kimco Realty, Peterson Cos. and Rappaport's first Retail Revelry in the DMV, a new party celebrating retail real estate in the Washington, D.C., Maryland and Virginia market, during the second day of the ICSC RECon event at the Bellagio Grand Terrace and Pool in Las Vegas.

"I started at 7 p.m. and I haven't finished the loop yet because I keep running into people," he said.

Weinschenk said he likes to sit and talk to those he runs into. He wants to know what's going on in their lives, their business and current trends in the retail industry.

"That pays dividends," he said. "Maybe not tomorrow, but six weeks from now, six months from now when you want to have a [business] conversation with somebody, you already have that personal connection."

"There's a lot of energy around retail in D.C., but what we want is to have retail where we want it to be," Falcicchio said. "We've had a lot of great conversations here — but I can't go too far into them — with folks who would [set up retail businesses] east of the [Anacostia] River."

L.F. Jennings Vice President of Marketing and Development Larlyn Jennings has attended RECon for the past 15 years.  Though retail has changed during that time with more mixed-use projects, she said, RECon is a great way to catch up with former and current clients.

"This is a great time to network, see people and entertain people," she said.

Courtesy of Rappaport
Rappaport President Gary Rappaport with Daphne Rappaport at Retail Revelry in the DMV at the Bellagio in Las Vegas.

Fonvielle thanked the companies that sponsored the first Retail Revelry in the DMV. The event would never have been possible if they hadn't all come together.

"The commercial real estate industry is still tied to personal interactions," Fonvielle said. "The DMV Revelry is truly a celebration of relationships we have with tenants, landlords, tenant representatives and gives us the opportunity to connect without the hoopla of the convention halls ... it's really one of connections and relationships.

"It's a wonderful industry where we are supportive of each other."

Check out a slideshow from the Retail Revelry event below. More photos can be found on the website.

This feature was produced in collaboration between Bisnow Branded Content and Retail Revelry at the DMV. Bisnow news staff was not involved in the production of this content. 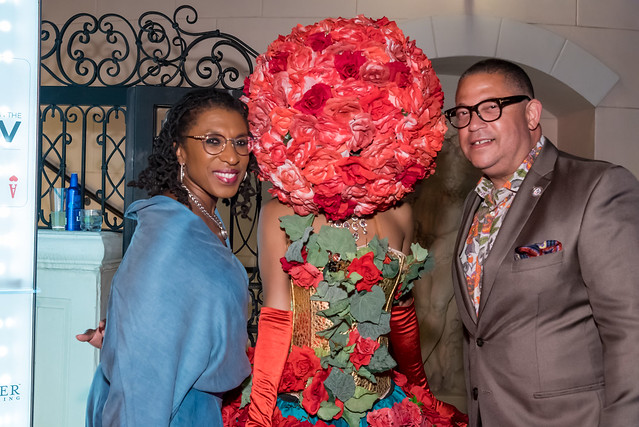 Retail Revelry in the DMV
Retail Revelry in the DMV is a new ICSC party to celebrate retail real estate in the DMV. Founded by H&R Retail, KLNB, Kimco Realty, Peterson Companies and Rappaport , the party will have retail related decision makers from Washington, DC, Maryland and Virginia.
Confirmed! You are subscribed to the Bisnow Washington, D.C. E-Newsletter.
Most Read Stories
More Top Stories
Bisnow D.C. Newsletter
Bisnow D.C. Newsletter