The Wharf Gets Its First Rooftop Bar And Lounge 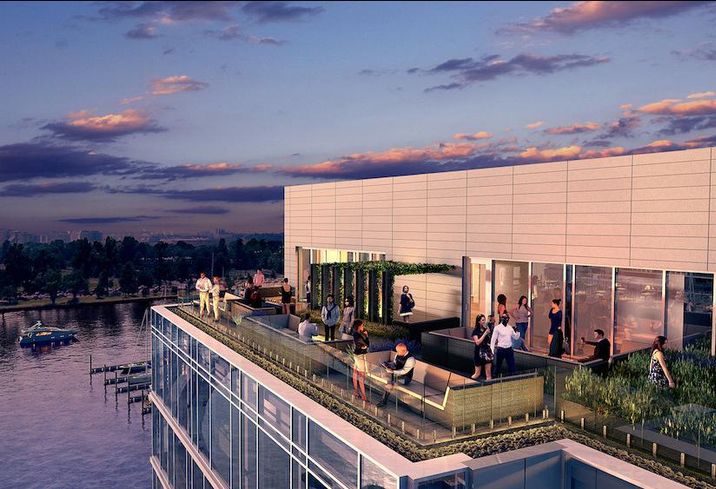 Courtesy: Hoffman-Madison Waterfront
A rendering of the Whiskey Charlie bar on the rooftop of The Wharf's Canopy by Hilton

The Wharf is less than two months from its grand opening, and the Hoffman-Madison Waterfront development team has just signed its first rooftop bar and lounge.

Whiskey Charlie, created by Endurance Management Group, will occupy a 2,200 SF space on the 10th floor of the Canopy by Hilton hotel. It will feature a glass-enclosed indoor lounge and an outdoor terrace. The bar is named after the call signal for boat captains entering the Washington Channel, which the $2.5B waterfront development overlooks.

The bar's drink menu will include craft cocktails, wine by the glass and local beer on tap. It will also serve small plates of food such as meatballs, crab cake sliders, cheese and charcuterie. It plans to open in October.

The cocktail bar is just the latest in a deluge of new nightlife options The Wharf will introduce to the Southwest Waterfront. The Anthem, a 6,000-person concert venue created by 9:30 Club owner Seth Hurwitz, will welcome the Foo Fighters the night of the Oct. 12 grand opening. The Wharf will have three other places to see live music, including the 450-person Union Stage, the 300-person Pearl Street Warehouse and Kirwan's Irish Pub.

The development will also have nearly 20 places to eat, including restaurants such as Del Mar by Fabio and Maria Trabocchi, Requin by Mike Isabella and Jennifer Carroll, and Hank’s Oyster Bar by Jamie Leeds.