The summer weather and the phased reopening of restaurants is bringing crowds back to popular D.C.-area dining destinations such as Old Town Alexandria, but capacity limits are still making it hard for businesses to turn a profit. 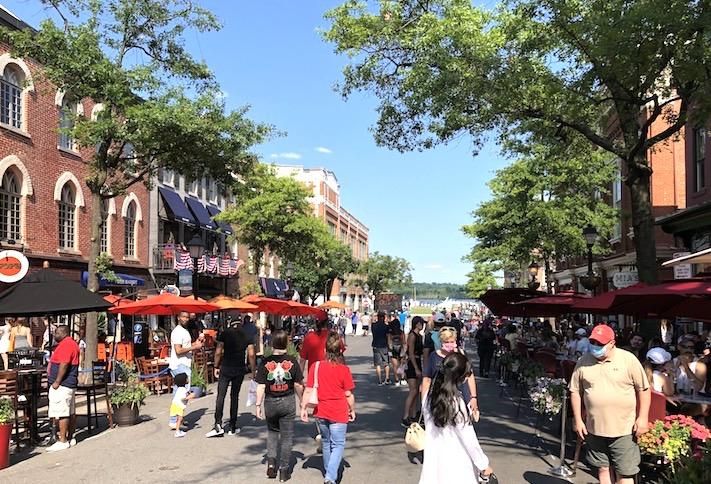 Northern Virginia entered its second phase of reopening Friday, allowing restaurants to seat customers inside at 50% capacity, in addition to the outdoor patio seating allowed in Phase 1. The indoor seating has created another stream of revenue for restaurants fighting to get back to their pre-crisis levels, but with half capacity and cautious customers, they are not there yet.

Sunday, when Bisnow visited Old Town, the streets and parks were lined with people, some wearing masks and some not, and the patio seating areas were filled with patrons. But inside the restaurants, some of the reduced seating remained empty.

Mia's Italian Restaurant, sitting one block from the waterfront at the corner of King Street and South Union Street, had a one- to two-hour wait for patio seating throughout the weekend, Alexandria Restaurant Partners founding partner Dave Nicholas said. People were willing to wait more than an hour for the patio seating, he said, even when there were tables available inside.

"The wonderful weather played into it, and some people are still cautious about wanting to dine inside," Nicholas said. 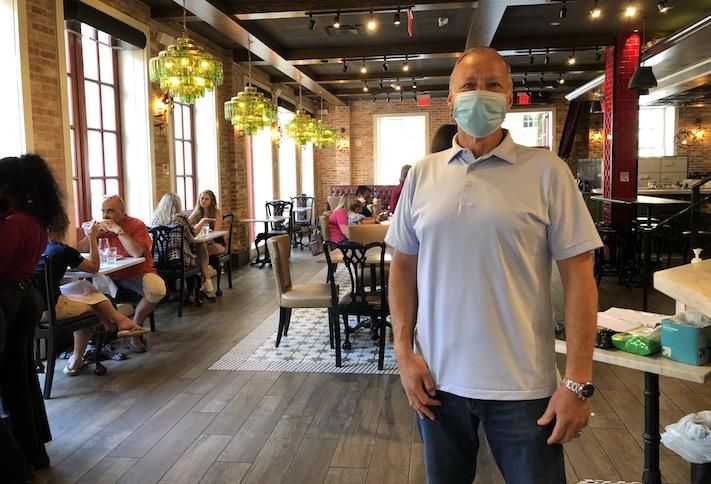 With patio and indoor seating at limited capacity and the bar remaining closed, the restaurants are still only doing around half their normal sales, Nicholas said.

"Our businesses can't operate at 50% or 60% of our normal sales and be profitable," Nicholas said. "But we're in this for the long haul, we're happy with the progress, and we're concentrating on safety right now and just figuring out a whole new business model."

Even with seating at half capacity, the ownership group is still staffing the restaurants at normal levels, he said. The safety precautions require extra steps, and they are still doing takeout service, meaning they need all hands on deck.

"We used to have water glasses and plates already on the table, we don't do that anymore," Nicholas said. "We bring sanitizer over at the beginning and at the end. Our timer goes off every 15 minutes and we wash hands and change gloves. There are a lot of extra steps." 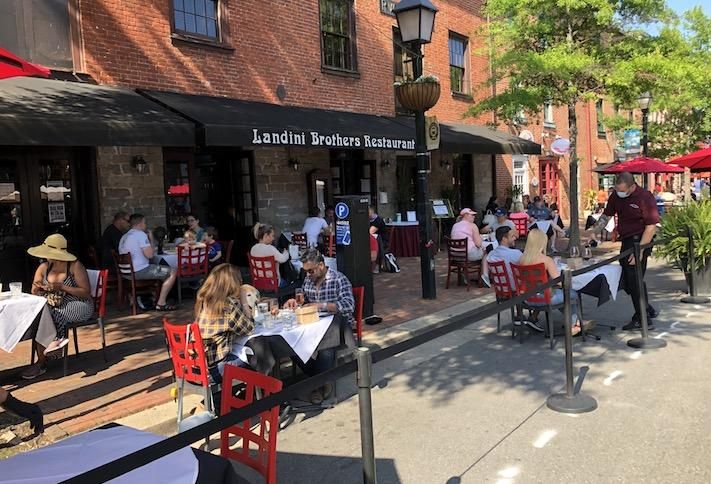 Noe Landini, whose restaurant group owns Landini Brothers and Fish Market on King Street, said the businesses received strong demand this weekend for indoor and outdoor seating. He said the restaurants had safety precautions including spread-out tables, hand sanitizing stations, staff wearing masks and regularly cleaning tables. The restaurant offered smartphone-accessible menus for customers who did not want to touch a physical menu.

"Customers know what to look for and how to be careful, and we've provided social distancing, and I think that's alleviated concern when they come in, inside or outside," Landini said. "I think they're tired of being cooped up and they're happy to be out. I don't remember ever seeing so many customers seeming so happy to be out. They were very enthusiastic, more than normal."

Even with the strong demand, the limited capacity meant the two restaurants each brought in around 60% of their pre-crisis sales this weekend, he said. Landini's group was in the process of opening multiple new restaurants when the crisis began, meaning its liquidity was lower than normal, and he said the current level of sales is not sustainable over the long term.

"Although this is great, and we're happy to get some momentum and have an increase in revenue, we've lost a significant part of our high season already, and it's going to take a while to catch up to the impact this has had on us," Landini said. 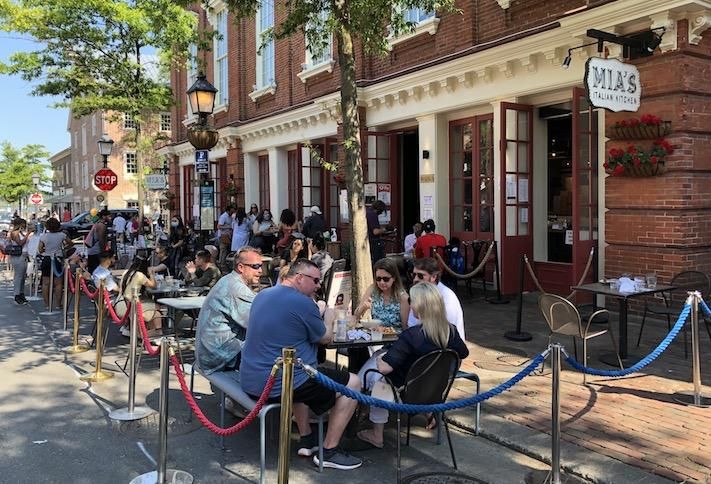 The Virginia and Alexandria governments have enacted a series of policies aimed at supporting restaurants through the reopening period.

Virginia allowed restaurants to sell alcohol to takeout customers, a move Nicholas said has boosted their sales. Alexandria has closed the 100 block of King Street to vehicular traffic, allowing for more patio seating.

Additionally, Alexandria allowed restaurants throughout the city to use their parking spaces for patio seating. Alexandria Economic Development Partnership CEO Stephanie Landrum said this has helped businesses during the first two phases of reopening.

"Because most of our business districts are pretty urban, many restaurants don't have a private parking lot or outdoor spaces," Landrum said. "During Phase 1, restaurants were only allowed to operate outdoors. And reading community feedback, a lot of people who want to return to patronizing restaurants would actually feel more comfortable about doing that outside than inside." 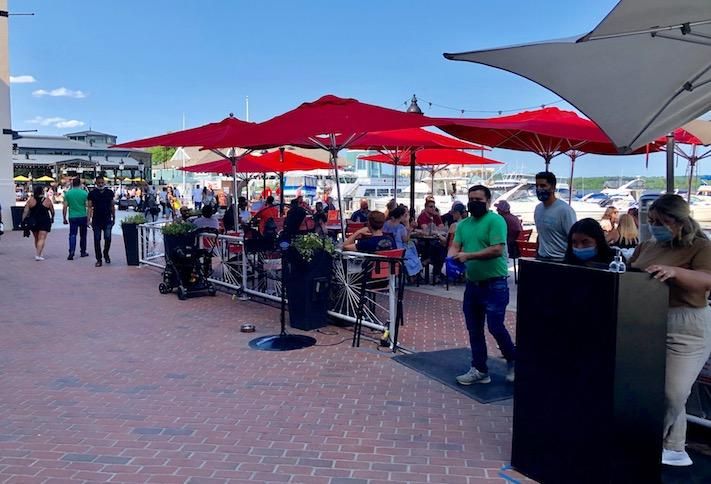 Alexandria Restaurant Partners is also pushing the city to allow people to drink from open containers in portions of the waterfront park, Nicholas said, potentially creating more to-go alcohol sales for nearby businesses.

"The waterfront is packed," Nicholas said. "The parks are packed. People want to get out."

Last year, Virginia passed a law allowing localities to host special events during which people could drink outdoors. Landrum said the Old Town Business Association approached the city about creating a long-term special event designation in a portion of the waterfront park to allow open containers. She said the city is in discussions with the association and the Virginia Alcoholic Beverage Control Authority about potential ways to allow open containers in a controlled area.

Restaurants that are farther from the waterfront are not experiencing the same surge in business. Theismann's sits in the ground floor of an office building near the Metro station, and it is geared toward a sports bar-type crowd, factors that have made it harder for the business, ARP founding partner Scott Shaw said. The group had kept it fully closed until last week, when it opened its patio at limited capacity.

"We held off on that because it's both Metro- and office building-dependent, so that's not a good combination," Shaw said. "Not to mention sports is a big part of Theismann's. We built a beautiful 60-person bar, and you can't use the bar. All the stars are lining up against that."

The summer weather and patio service has helped boost sales, but Shaw is worried about what the winter could bring if indoor dining still hasn't returned to full capacity and the government relief money has run out.

"There's going to be a lot of pressure on restaurants in the winter with no relief money, no patios and an uncertain dining public," Shaw said. "This is an existential crisis for restaurants. If landlords, cities and counties don't work to figure out how to get back to at least 70% of normal sales, they will go away."

Landini said conditions are still too uncertain to make any long-term projections, but he hopes after one or two weeks of Phase 2's indoor dining service he will have a better idea of where the business stands. He said his restaurants need to bring in as much revenue as they can during the warmer months before outdoor seating becomes less feasible later in the year.

"We need some kind of track record under our belt to know what we're dealing with and then slowly start to have some long-term planning in how we're going to treat the next year or two," Landini said. "If we run into late fall or early winter when outside seating is going to be less desirable and at some point obsolete, then we have to rely on being inside."

Landrum said the city may consider allowing tents and heaters for the outdoor patios to help restaurants extend outdoor dining later in the year. She said she heard from many restaurant owners who are struggling to make a profit while at 50% capacity, but the health crisis still makes that necessary.

"All they can do is follow state guidelines and move slowly through the phases, and what that means right now is reduced occupancy," Landrum said. "For most businesses, especially restaurants, who run on thin margins, being able to operate at only 50%, while it's a huge improvement over where we've been the last three months, it's still hard for these businesses."

Alexandria Economic Development launched a $4M grant program with a June 8 application deadline, and Landrum said it has received a large number of requests. She said it is preparing to give grants between $10K and $20K, depending on the number of employees at each business.

“We’re hoping to inject some cash into a number of restaurants with that program, and also a lot of those businesses were fortunate to take advantage of the PPP federal loan grant program,” Landrum said. “So the combination of these things is what’s going to help our healthier restaurants survive, but we’re also mindful that not every business will be able to make it through this pandemic.”