A new barbershop concept is entering the D.C. market with ambitious expansion plans at a time when many retailers are struggling to stay open. 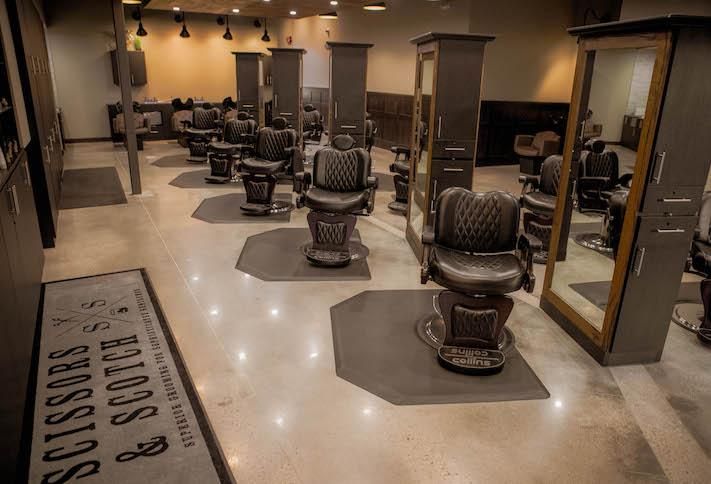 Scissors & Scotch, a men's barbershop mixed with a cocktail bar and lounge, signed a lease at 1 M St. SE in Capitol Riverfront, Bisnow has learned.

The retailer hopes to open by the end of the year in the 2,381 SF space in the building, the newly developed headquarters for the National Association of Broadcasters, Scissors & Scotch co-owner Erik Anderson said.

The Kansas City-based retailer, which grows through a franchise model, is in talks for additional deals in the NoMa-Union Market area and in Arlington's Ballston neighborhood, Anderson said. He hopes to have those locations open by next summer, and he ultimately aims to open 10 locations in D.C. and Northern Virginia.

"We're really excited about the urban area of D.C., the development, the growth, and you look at the population density and the amount of income and educated workforce out there, it's going to be a home run," Anderson said. "We really feel strongly that our concept and brand is going to fit right in with the D.C. market." 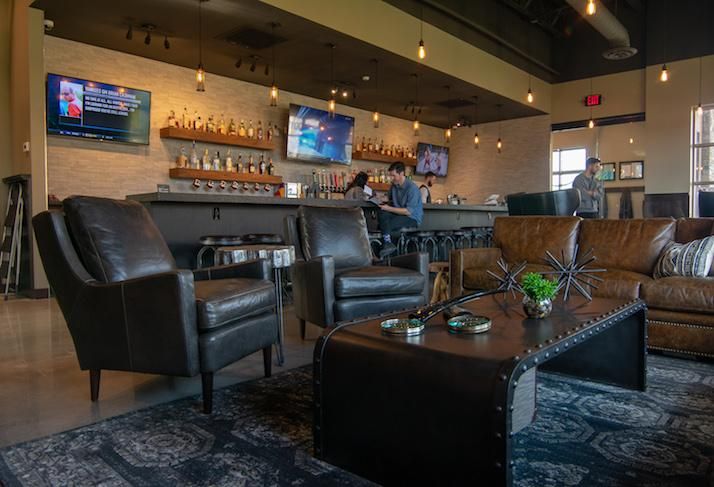 The concept features a fully stocked bar and lounge alongside a men's barbershop. Haircuts start around $54 and include a complimentary cocktail. Additional cocktails cost around $13, Anderson said. Customers who become members can access discounts, networking events and other benefits.

"At the end of long days, guys used to hate getting haircuts," Anderson said. "We wanted to change that, we want guys to look forward to getting their haircut. Drinks are just one aspect — we wanted to build a total experience for men."

Founded in 2015, Scissors & Scotch now has 10 locations in the Kansas City, Austin, Dallas, Denver, Des Moines, Oklahoma City and Omaha areas. It is preparing to open soon in Nashville and also has expansion plans in Phoenix, Chicago, Philadelphia and New York, Anderson said. The company launched its franchise initiative in 2017 and said it aims to add 175 franchise locations within five years. 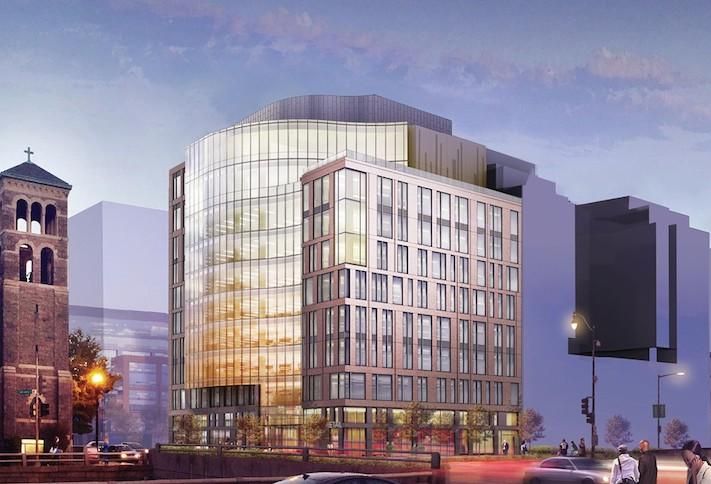 The retailer has weathered the coronavirus storm better than others, Anderson said, and sees now as an opportune time to expand, giving it the potential to secure favorable deals as landlords look to fill vacancies.

Scissors & Scotch temporarily closed its locations during the stay-at-home orders, and then it reopened when each jurisdiction allowed barbershops to operate. Sales have been down by around 10% since reopening, Anderson said.

"I have no complaints," Anderson said of the pandemic. "When you look at the retail world, people are getting destroyed, and we were very fortunate to have a resistant model, where people love coming and getting a haircut."

Koroma said he thinks the concept is ideal to weather the challenges of today's market because it combines an activity many people consider essential — a haircut — with the cocktail bar to satisfy the leisure experience people are missing.

"Having a glass of whiskey while you wait, or afterwards, that's appealing," Koroma said. "Even in a time where you have social distancing and people have been locked inside during quarantine, that's like a leisure activity that's also a need because you do need to get a haircut. When you can fuse the two, you have an immersion that is the perfect storm." 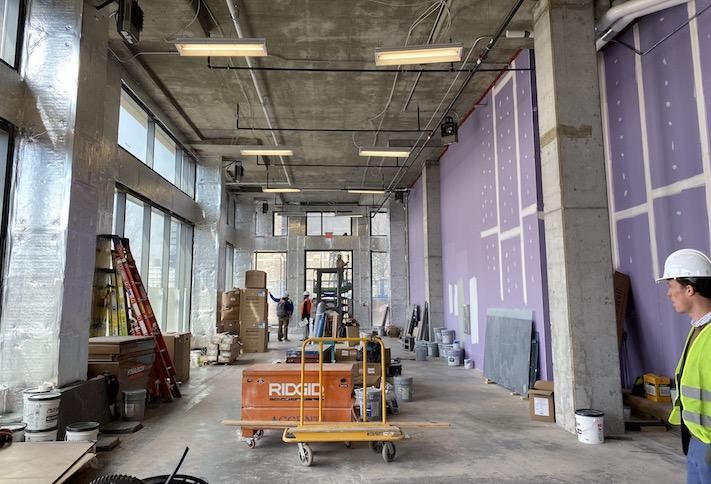 Courtesy of Miller Walker Retail Real Estate
The inside of the retail space in the 1 M Street building that Scissors & Scotch leased.

Retail is facing severe challenges with a wave of restaurants closing in D.C. and around the country, allowing growing companies to benefit from a tenant-favorable market. As he helps Scissors & Scotch expand in the D.C. market, Koroma is speaking with a host of landlords and said he is seeing owners bring down rents by as much as 20%.

"When they hear they have a good-credit tenant that's in the market, they're jumping right on it, they're willing to get aggressive and they're making it a priority to try to get this done," Koroma said of landlords. "If you have a model that supports expanding at this time, although it is an unfortunate circumstance, the timing could not be better."

The parties declined to disclose the rent on the M Street SE deal. Miller also said that landlords are willing to offer discounts, but they still need a deal that makes financial sense. He said some tenants searching the market are asking landlords to offer so much free rent and tenant improvement allowances that the owner would lose money on the deal.

"By and large, landlords are willing to work with you if you're the right tenant," Miller said. "We'd like to do a deal, but I'd rather wait six months and do a deal that's reasonable."

The tenants Miller sees on the market include national fast-casual chains like Chipotle that have maintained strong sales, and new, growing concepts like Scissors & Scotch that did not have a large enough existing footprint to suffer the worst of the retail market's damage.

"If you were planning to open a business that hadn't opened yet and didn't have to carry the financial uncertainty of waiting through the coronavirus, which is going to cost a lot of people money, if you're looking at the market now, it's a good time to do deals," Miller said.

Miller said the NAB was excited to bring in Scissors & Scotch to its building. The property has one other available retail space, for which Miller said he is seeking a food and beverage user. He said retailers see now as a good time to sign leases because they think by the time they finish the permitting and build-out processes, they will open into a less challenging environment.

"We love the tenant, it's a perfect fit for the building," Miller said of Scissors & Scotch. "It gives comfort to a landlord as well as it should for an entrepreneur if you're starting off at the end of the coronavirus in a fresh new way, you're not carrying some of the baggage that happened in the spring. They're starting on a fresh foot, and they've got a neat concept."

Koroma said the Capitol Riverfront area made sense not only because of the surge of new multifamily development but because of the high rents those apartments are achieving.

"It has the fastest residential growth, there's so much density and the new construction is commanding tremendous rents," Koroma said. "So that is the customer that [is] ideal to pay $50 for a haircut and might also want to do a tasting or come to a bar. You're near Nationals Park, so you have so much exposure and visibility that it almost makes too much sense."

As it expands in the market, Scissors & Scotch is looking for similar deals where it can enter new developments in mixed-use neighborhoods, Anderson said.

"We want to be in Class-A retail in live-work-play environments," Anderson said. "We want to be in areas where people can go to work, where they can eat and have fun. That's the vibe that we really favor."