A massive office complex in the heart of D.C.'s Central Business District is set to undergo a major renovation. 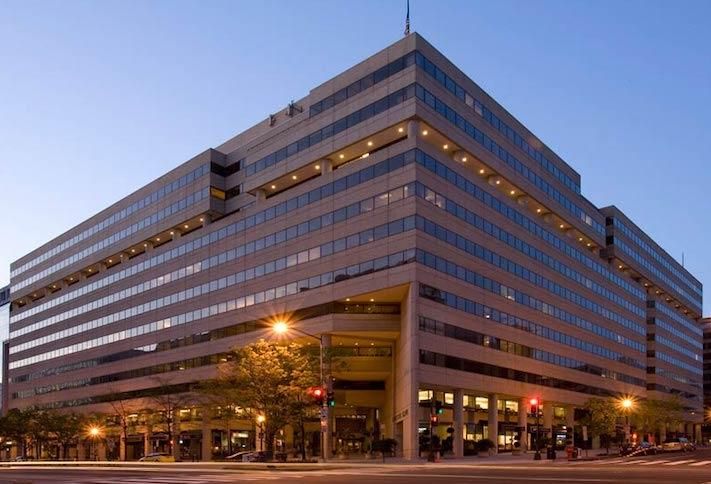 Tishman Speyer sent an email last month to the building's tenants, which Bisnow has obtained, detailing extensive plans to revamp the retail and amenity spaces at International Square, including the addition of a grocer, a food hall, a conference center and a gym.

"We are excited to announce that International Square will be transforming the street level and ground level to enhance employee’s experience in the building," Tishman Speyer's property management team wrote in the email.

The owner has received two building permits this month for demolition of office space and amenity space within the building, a review of Department of Consumer and Regulatory Affairs records found. Tishman Speyer, through a spokesperson, declined to comment.

The three-building International Square complex consists of 1.2M SF of office and retail space. It encompasses nearly the full block bounded by K Street NW, 18th Street, I Street and 19th Street, and sits atop the entrance to the Farragut West Metro station.

International Square's 2019 assessment valued it at $646M, property records show. It was the third-most-valuable taxable property in the District in 2018, according to the Washington Business Journal.

The renovations come as one of the building's tenants, the Federal Reserve Board, is preparing to vacate International Square as part of its consolidation plan, the WBJ reported last month.

The food court inside International Square and street-level restaurant Prequel both closed last month. Tishman Speyer's email to tenants said it plans to add a food hall to the building's street level with about 20 carefully curated vendors and a bar.

The owner also plans to add two new full-service restaurants and a boutique grocer to the street level, plus an additional restaurant to the lower level, the email said. 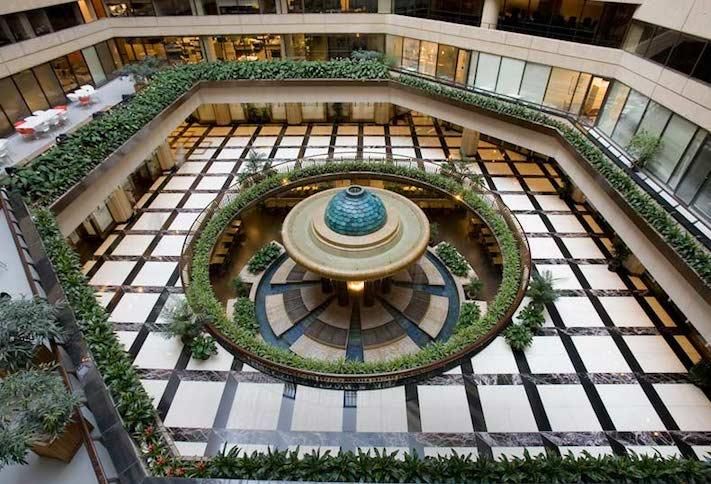 Tishman Speyer also plans to add an entrance from the street into the 1850 K St. NW and 1825 Eye St. NW portion of the complex, and renovate the lobbies and fountain in the atrium, according to the email.

On the lower level, Tishman Speyer said it plans to add new amenities for office tenants, such as a conference center that can fit 200 people, a fitness center with showers and towel service, and a tenant-only lounge.

New York-based Tishman Speyer — owner of one of the world's largest office portfolios — expects to begin demolition this month and complete the conference center, fitness center and lounge by Q4 or Q1 2021, it told tenants. It said it aims to complete the street-level retail amenities and lower-level restaurant by Q3 or Q4 2021.

The Starbucks and Pret A Manger in the building will remain open during construction. The building also has a Sweetgreen Outpost, a new service that allows tenants to order delivery from the salad chain. Tishman Speyer said in the email it is exploring additional food options for tenants while the renovations are underway.

International Square has a package of amenities and services through Tishman Speyer's Zo offering, a concept it first rolled out at Rockefeller Center in 2017.

The building is the latest in a series of D.C. office properties Tishman Speyer — which owns close to 3M SF of properties in the region — has redeveloped in recent years.

After acquiring the former CBS News bureau at 2020 M St. NW in 2015, Tishman began developing a 340K SF spec office building on the adjacent site at 2050 M St. NW. It landed law firm Paul Hastings as an anchor tenant, and the Washington Business Journal reported in September the firm expects to move into the building in Q2.

Tishman also added four stories and fully renovated the office building at 2000 K St. NW, a project that completed in 2017. Additionally, the firm plans renovations for the 601 D St. NW building that the Department of Justice is vacating as part of its move to NoMa.