Tenants Still Have Upper Hand In Area Lease Negotiations, But Not For Long 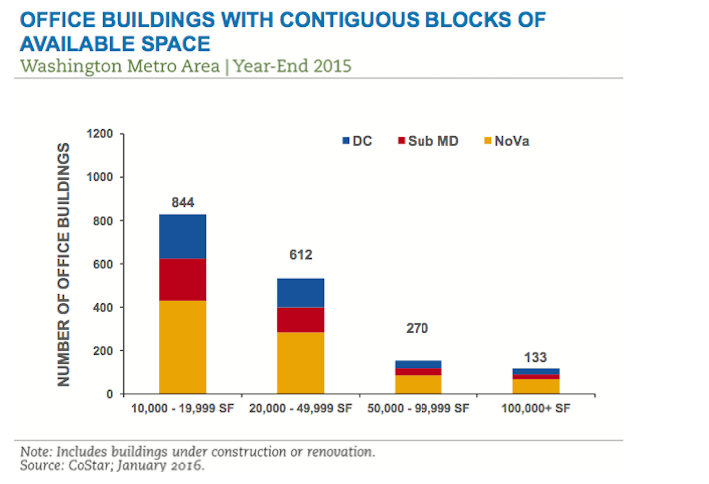 For the first time in three years, the DC area saw a major rebound in the local economy in 2015, fueled by the creation of 62,000 new jobs—well above the 20-year annual average of 42,000—ushering in signs of stabilization in the office market.

Overall, tenants continue to have the upper hand in lease negotiations but the market is tightening and that leverage won’t last long, according to a new survey by real estate advisers West, Lane & Schlager.

As for available space, the survey finds an abundance of newly built, high-quality buildings in the District. In the NoMa and Capitol Riverfront districts, there's 500k SF of additional space under construction. The relatively high vacancy and low rental rates in both submarkets give tenants “significant negotiation leverage, making it an opportune time to sign for new space.”

Tenants seeking Metro accessibility and an area rich in amenities who can live with smaller spaces might want to look in Downtown Bethesda. Strong landlord incentives should remain in place there until roughly late 2016. North Bethesda is also attractive as recent federal agency relocations have left the submarket with declining rents and the largest amount of vacant, Class-A space in suburban Maryland.

In Rosslyn, where rental rates are higher than the Northern Virginia average, competition from the new Metro Silver Line corridor, nearby Alexandria, and the District are forcing landlords to offer higher tenant improvement allowances and more free rent.

But these perks won’t last long, so tenants looking to upgrade should do so soon, the WLS survey warns. “We expect the office market to become more competitive in Northern Virginia in late 2016 or early 2017.”