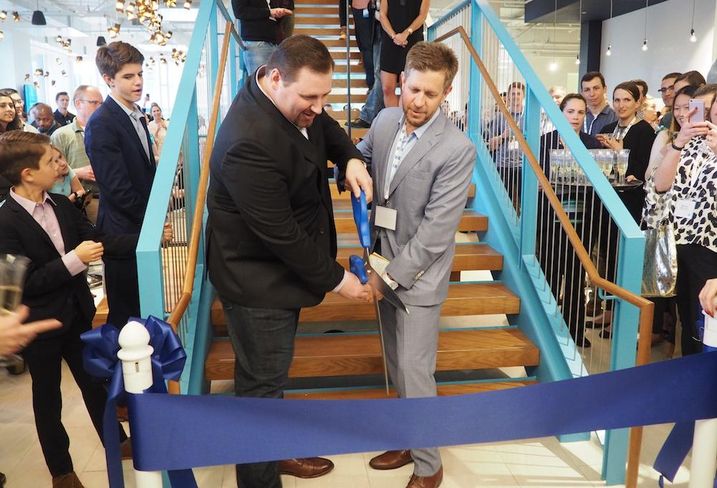 Educational technology firm 2U celebrated the opening of its new heaquarters near the New Carrollton Metro Tuesday evening.

Last year, it signed a deal to keep its HQ in Prince George's County, moving from a 68K SF office in Landover to the former CSC building near the New Carrollton Metro, where it will fill 281K SF at full build-out. 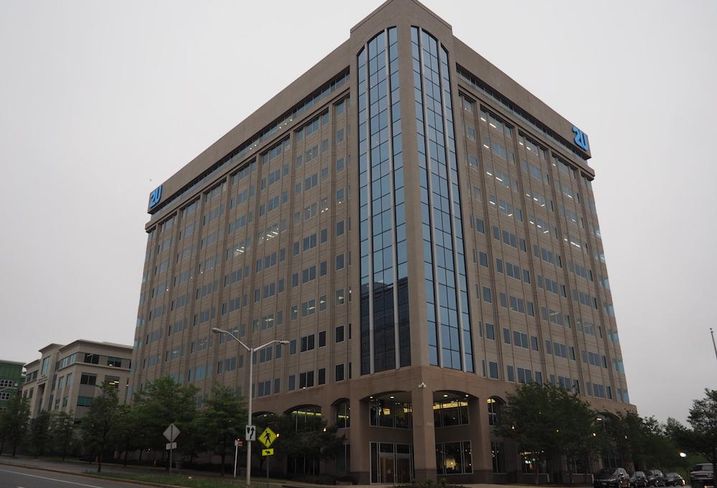 The company's employees began working at the new office at 7900 Harkins Road in Lanham on Feb. 21. It currently has 736 of its 1,297 total employees working in the new HQ.

The company has pledged to hire an additional 900 people by 2020, when it plans to fill the entire 281K SF office. The company is currently occupying about 168K SF, with some floors left empty to make room for the expansion.

Employees will get to watch the area come to life in the coming years, as Urban Atlantic launches its 2.7M SF mixed-use development at the New Carrollton Metro, which will be the eastern terminus of the Purple Line, the 22-mile light rail expected to open in 2022. Urban Atlantic earlier this month signed Kaiser Permanente to open a 176K SF facility at its development. 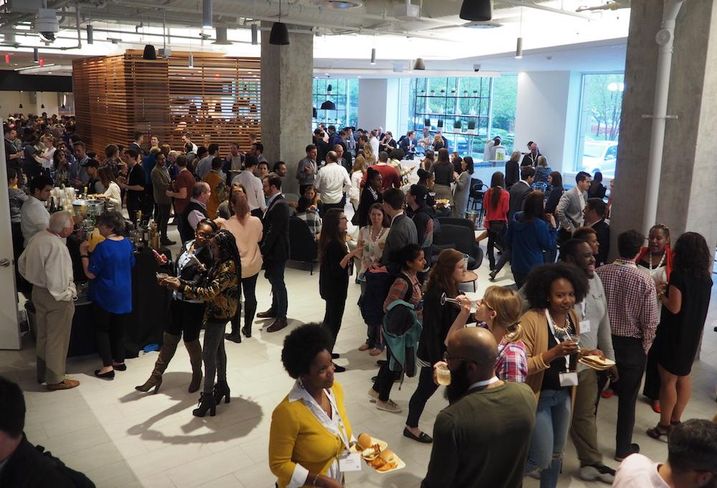 Roughly 800 people, mostly 2U employees and guests, showed up to celebrate the grand opening in the building's lobby Tuesday evening. The cafeteria, which opened Monday and will cater to 2U employees daily, served beef, turkey, vegetarian and crab cake sliders, hush puppies, chips and guacamole.

During the event, Bisnow took a tour around the company's new digs. 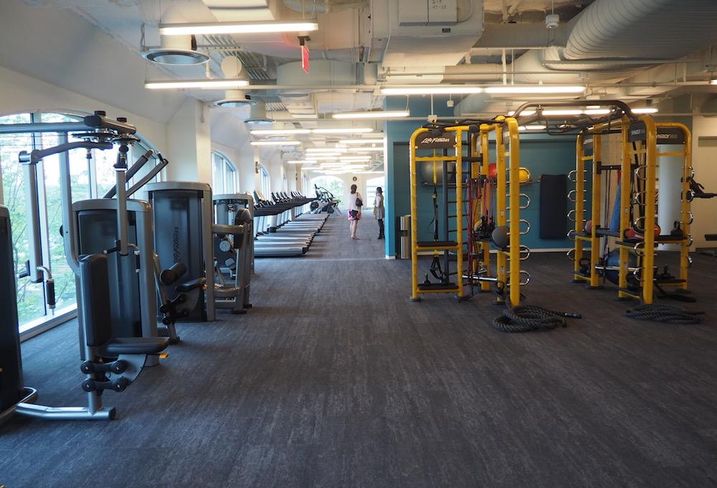 On the second floor, the building has a massive 12,000 SF fitness center with a treadmill area, weight room and yoga studio, plus lockers for the employees. The company brings in outside trainers to run fitness classes for employees. 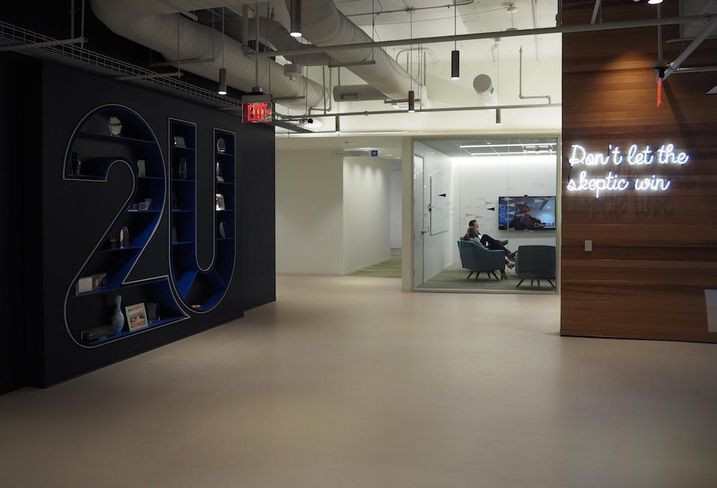 Bisnow: Jon Banister
The 2U bookshelf in the company's 12th-floor executive suite

When employees get off the elevator on each floor, they are greeted by one of the company's mantras like "Don't let the skeptic win." Each floor also has conference rooms and small co-working style work booths. 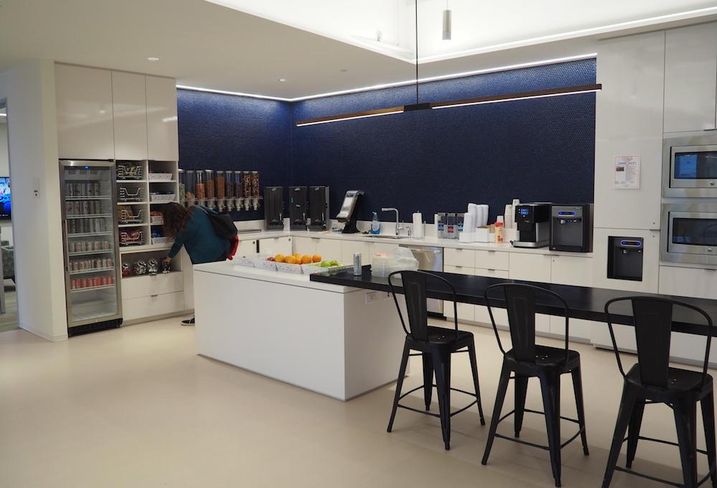 In addition, each floor has a break room stacked with complimentary snacks, drinks and coffee. The floors are named after each of the different cities where 2U has a presence. For example, the marketing department on the 11th floor is on the New York floor. The company in February signed an 80K SF lease to move its NYC office from Chelsea Piers in Manhattan to Dumbo Heights in Brooklyn. 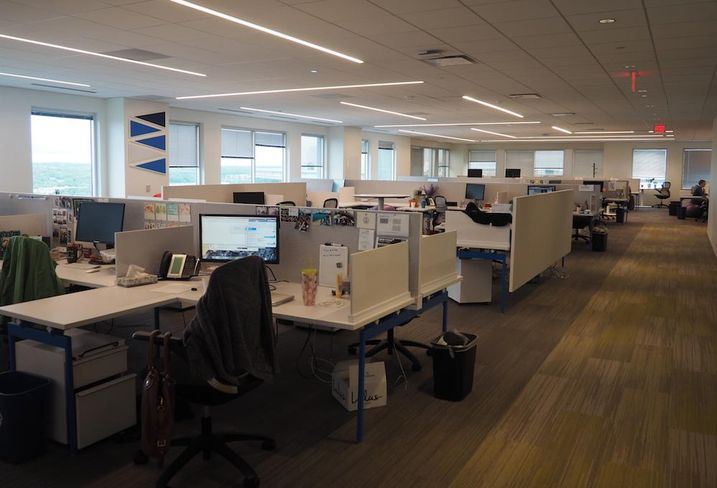 The workspaces are designed to allow collaboration, with low cubicle backs and plenty of open space. The company is hiring quickly and currently is seeking to fill 100 positions nationwide. 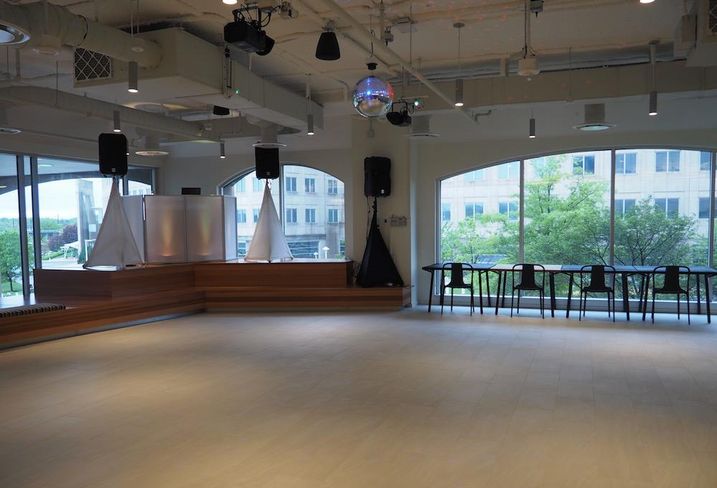 Bisnow: Jon Banister
2U has a disco ball in its second floor common area, where the CEO holds spontaneous dance parties

Prospective employees had better be ready to dance. The company installed a disco ball in its second floor common area. The space typically has desks for collaborative working, but every month or two Paucek will clear the space and send out a companywide e-mail announcing a spontaneous dance party, intended to boost employee morale.