MakeOffices Prepares To Open Flagship Co-Working Space At The Wharf 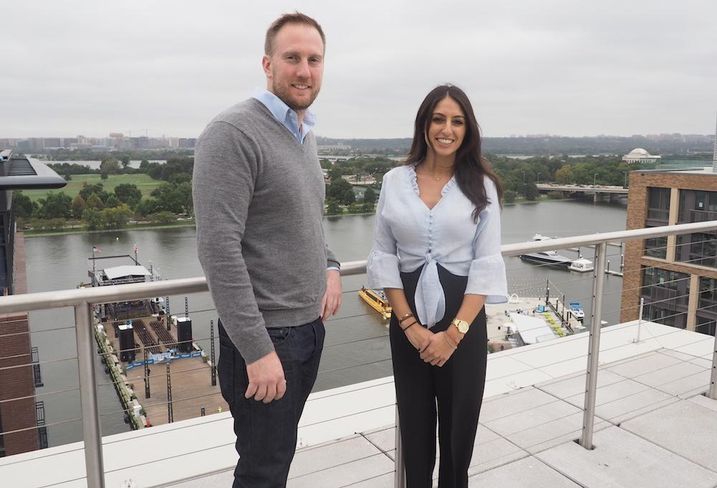 MakeOffices will welcome the first members to its new 44K SF co-working space at The Wharf in December, with its official opening planned for January. It will be the eighth D.C.-area location for the six-year-old company, which recently underwent a leadership shakeup.

Hoffman-Madison Waterfront, The Wharf's developer, signed MakeOffices in June 2016 to occupy the second and third floors of its 800 Maine Ave. SW office building. MakeOffices is still building out the space, but Bisnow took a sneak peek inside after The Wharf's grand opening ceremony Thursday. 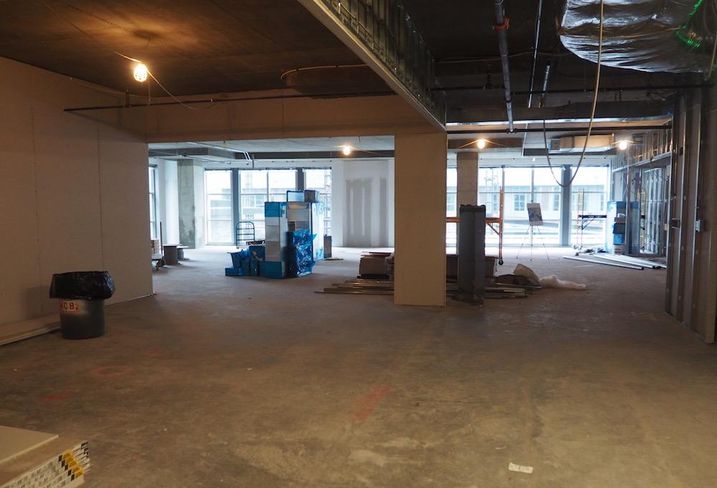 Bisnow: Jon Banister
The open space that will be the entrance and lounge area in MakeOffices' new location at The Wharf

Upon entering the second-floor space, members will be greeted by a large open area with the management office, reception desk and a conference room. That will lead directly into the lounge area where coffee, beer and tea will be served and members can socialize or work in the shared seating areas.

MakeOffices plans to partner with some of the new stores and restaurants at The Wharf for events. The development has a wide offering of food and beverage options from fast-casual spots like Shake Shack to high-end restaurants from Mike Isabella and Fabio and Maria Trabocchi. 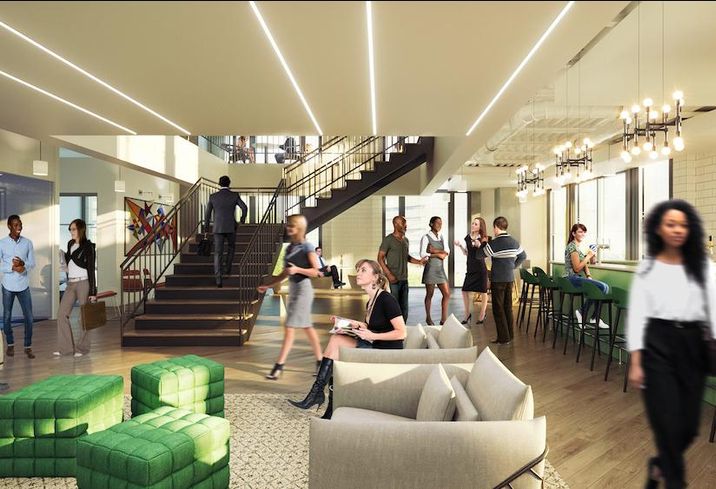 The common area will feature a two-story pantry with an open staircase providing direct access to the third floor.

Given its location on the Southwest Waterfront, MakeOffices is giving the space an aquatic theme. The co-working provider brought on Gensler to design the space. 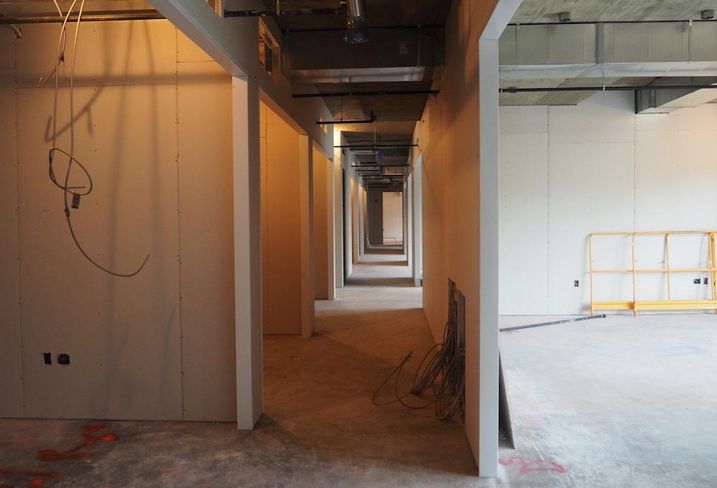 Bisnow: Jon Banister
A corridor of offices in MakeOffices' new location at The Wharf

The 44K SF location will have 99 offices, with the largest fitting 18 people. It will also have 48 dedicated bullpen desks, situated in a locked area so members can leave possessions on their desks.

MakeOffices recently began touring prospective tenants through the space. It aims to secure commitments for 50% of the space by its January grand opening. MakeOffices CEO Zach Wade said he expects some members will move from its other D.C.-area spaces, located in Logan Circle, K Street, Dupont Circle, Bethesda, Clarendon, Reston and Tysons. But he expects a larger share to be new members, with several companies already expressing interest in the space. He also said he is working with PN Hoffman to provide flexible space for some of The Wharf's other office tenants.

"A main purpose of having us there for PN Hoffman was so we could be another tool in their toolbox," Wade said. "Other tenants within the project can take less space because we're there and people have the opportunity to flex up or down." 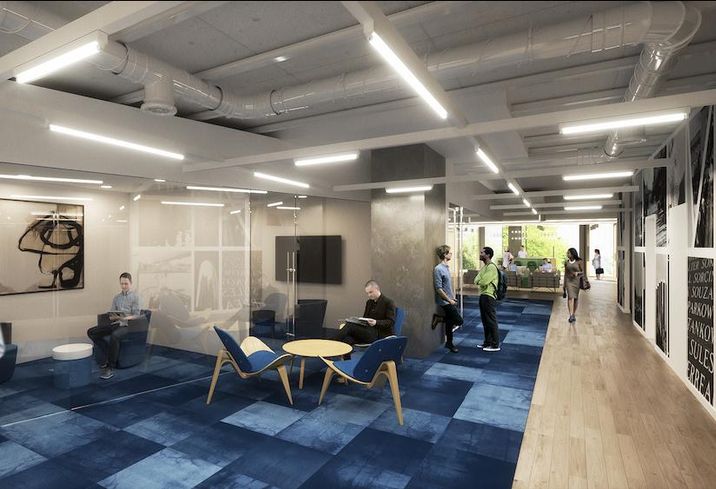 Courtesy: MakeOffices
A rendering of MakeOffices' new location at The Wharf 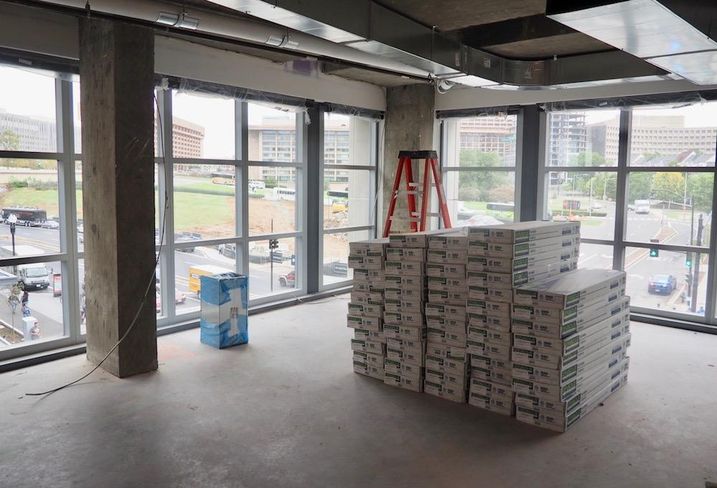 Bisnow: Jon Banister
The corner office on the third floor of MakeOffices' new location at The Wharf

The two corner offices, each fitting 14 people, offer the most natural light. But MakeOffices designed the whole space to be filled with light by putting all of the offices either on the window line or directly across from a windowed office.

Located in the second and third floors of The Wharf's 800 Maine office building, the space faces the intersection of Maine Avenue SW and Ninth Street. 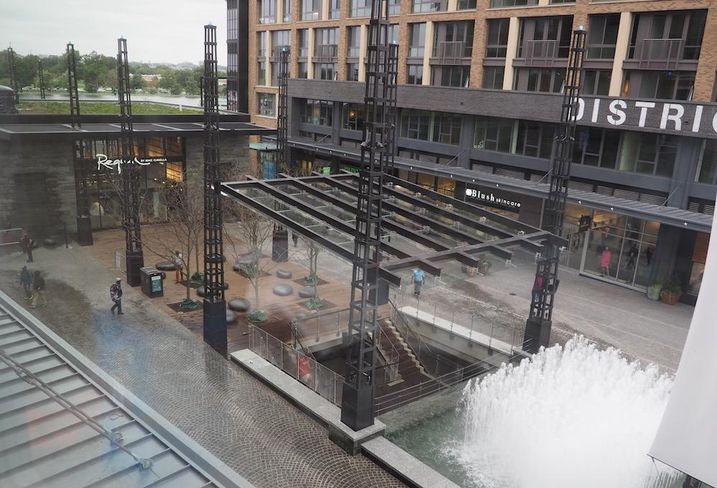 The space also looks out into The Wharf's District Square, the development's shopping hub. The plaza, with a fountain and seating area in the center, is home to the second location of iconic local bookstore Politics and Prose, plus a number of other soft goods retailers. In the center of District Square is Requin by Mike Isabella.

Members will have access to 800 Maine's rooftop amenity space, with an outdoor courtyard overlooking the waterfront and an indoor lounge area.

Founded in Rosslyn in 2011, MakeOffices has since expanded to Chicago, with three locations, and Philadelphia, where it just opened its second space. In May, investors Ron Paul and MRP Realty ousted founder Raymond Rahbar from his role as CEO, putting Wade, a principal at MRP, in his place.