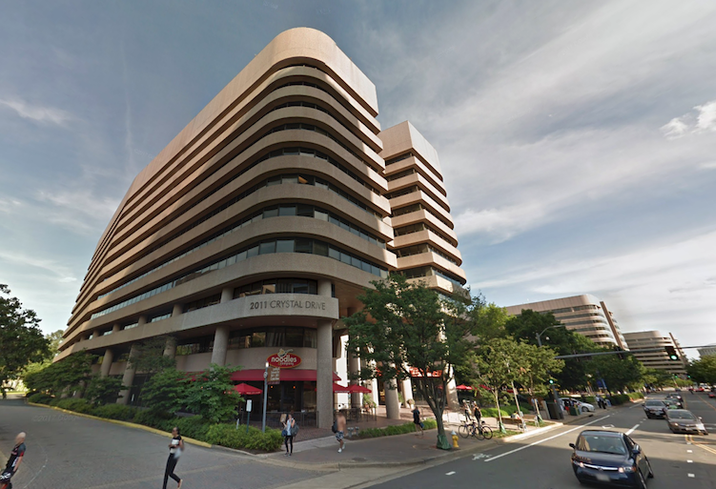 A global hotel management company is moving its headquarters from Ballston to Crystal City, a move that represents a big win for JBG Smith's redevelopment efforts in the neighborhood.

The 11-story, 444K SF building was constructed in 1984 and renovated in 2006. It landed the regional headquarters of Lyft in 2016 when the ride-sharing company signed on for 5,500 SF. JBG Smith last month renewed a 43K SF lease with Conservation International in the building for 15 years. The property's other office tenants include Capital Impact Partners, Albion & Health, IFES, The Green House Project, plus ground-floor retailers Cosi and Noodles and Co. It sits across the street from the Crystal City Shops retail center and about two blocks from the Metro station.

Since completing its merger in July and becoming a public REIT, JBG Smith has made the revitalization of Crystal City its top priority. The developer is going through the approval process for an Alamo Drafthouse-anchored retail redevelopment at 1770 Crystal Drive and is assessing market conditions for future phases. The submarket was included in Northern Virginia's bid for Amazon HQ2, which was included in the tech giant's 20-city shortlist in January.

With the Interstate deal, JBG Smith has secured its first major office coup for the submarket. Last year, Lowe Enterprises signed the American Institutes for Research to a 90K SF lease at its building at 1400 Crystal Drive.

"We view it as a great validator of our future vision," JBG Smith Executive Vice President Dave Ritchey said. "While 35K SF is a significantly sized deal, it's really I think about the broader statement in terms of attracting a major headquarters to Crystal City."

Ritchey said he has recently seen a broad increase in interest in Crystal City from a variety of sectors.

"We've seen a pickup in activity with government contractors, which we think is partly driven by some additional clarity around the federal budget driving some added confidence from the contractor community," Ritchey said. "We're also highly focused on associations and nonprofits, specifically those that are located in the CBD today that are getting priced out of D.C."