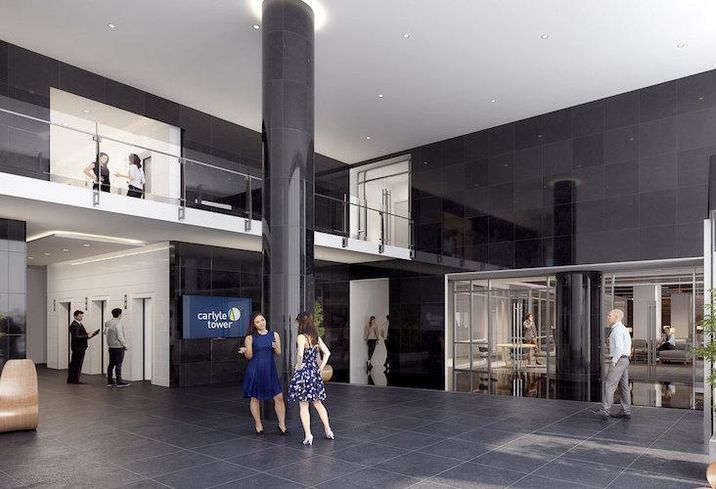 Courtesy: Rubenstein Partners
A rendering of the renovated lobby at Carlyle Tower in Alexandria

Industrious plans to open a 25K SF coworking space at a renovated Alexandria office building early next year, but not through a traditional lease with the landlord.

The New York-based coworking provider signed a management agreement with the landlord, Rubenstein Partners, to operate the space on the second floor of the Carlyle Tower building at 2461 Eisenhower Ave.

"We've structured it as a management agreement so we can participate in the success of the Industrious plan economically," Rubenstein Regional Director Steve Evans said.

Rubenstein acquired the property for $58M in 2015 after a General Services Administration tenant was departing, hoping to benefit from leasing momentum created by the National Science Foundation moving its headquarters across the street. The building is part of the Hoffman Town Center complex, where Wegmans signed on last year to open a grocery store at StonebridgeCarras' 1M SF mixed-use development.

Rubenstein launched a major renovation of the 14-story, 365K SF building, enhancing the common areas, adding amenities and replacing the building systems. It is also upgrading the 22,500 SF of existing retail in the building and plans to add a 7,500 SF retail pad. The renovation is nearing completion and the coworking space is expected to open in January.

The space will be the fourth D.C.-area location for Industrious, which in April opened a space in Thomas Circle and has since signed leases in Bethesda and Ballston. The company plans to continue to expand in the D.C. market, with the goal of having eight D.C.-area locations open by the end of 2019.