The first quarter of 2017 was a tumultuous one for politics in DC as the nation inaugurated a new president and his policies began to take shape, but that uncertainty does not seem to have fazed the DC-area commercial real estate market. The Q1 reports from several major firms show strong leasing and investment activity in DC and its suburbs. Bisnow took a closer look at those reports and identified five key takeaways. 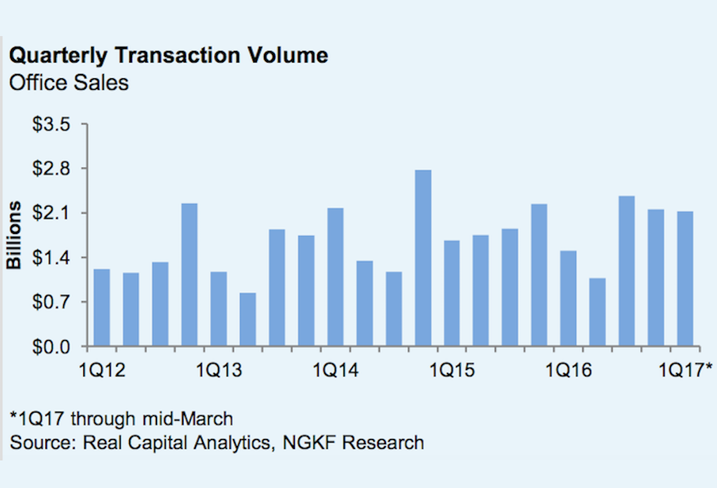 The AFIRE survey released at the start of the year had DC at its lowest-ever ranking for foreign investment, which had some in the market worried, but the money pouring into the District this quarter should help alleviate those concerns.

Overall investment sales activity through mid-March in the DC Metro region reached $2.1B, surpassing the $1.5B total in Q1 2016, according to NGKF. Activity was especially strong in NoVa, with $1.2B in sales volume.

Sales activity in the District was driven by foreign investors, who accounted for 73% of the total volume, according to CBRE. This made DC the third most active U.S. market for cross-border investment. Singapore's sovereign wealth fund GIC invested more than $1B in three of Beacon Capital Partners' assets and Tokyo-based Unizo continued its DC acquisition spree with two more buildings at the end of the quarter.

"Foreign investors have remained attracted to this market," NGKF managing director Sandy Paul said. "That was not a given when the new administration took office. Given the administration’s concern about illegal immigration, there was some speculation that foreign investors would lose interest in the U.S. broadly and Washington particularly, but that doesn’t seem to be happening." 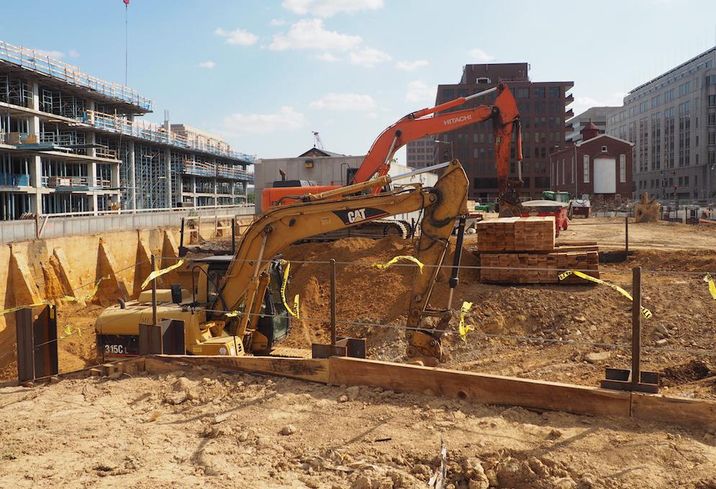 
Excavators digging at the Capitol Crossing site in September

Strong demand continues to push up rents in the trophy segment of the office market, as tenants seek out new product with quality amenities and proximitiy to transit. More than 400K SF of pre-leases were signed during Q1, according to CBRE. This has developers bullish on building trophy product as they continue to break ground on speculative office projects. Six of the 10 office projects under construction in the District broke ground on a speculative basis, according to CBRE.

"There is fairly strong demand for the top segment of the market," CBRE research manager Wei Xie said. "That is driving development and redevelopment."

Two notable spec projects that broke ground this quarter were Akridge's 1701 Rhode Island, a 102K SF redevelopment of a YMCA into a trophy office, and Property Group Partners 250 Mass Ave., the second building in the Capitol Crossing project. The first Capitol Crossing building, 200 Mass, is also under construction without leases signed and will deliver in 2018. PGP regional vice president Bob Braunohler said the project has had strong interest from tenants and the company plans to announce the first anchor tenants over the next several months.

3. Commodity Class-A Is Struggling To Keep Up 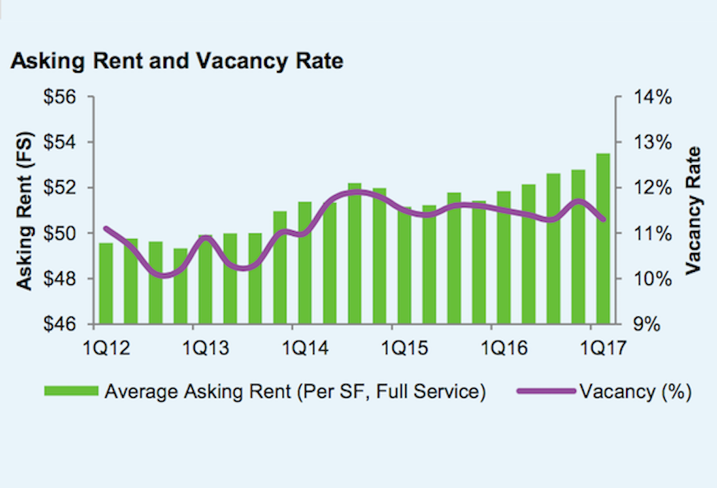 While the flight to quality is driving demand and pushing up rents for new trophy product, it is leaving landlords of non-trophy or commodity Class-A assets struggling to find tenants.

"They are certainly struggling because tenants have made it clear they’re either pursuing flight to quality where they want the newest, most efficient, best-designed space or they’re value conscious and trying to control costs and are willing to accept Class-B," NGKF's Paul said. "If you own an asset that is commodity A, largely properties in the CBD and East End between $60/SF and $75/SF, those assets simply do not have much of a market right now."

Paul said this leaves landlords with a difficult decision. They can either renovate the building and add amenities to try to compete with trophy product, try to cut their losses and lower rents to the Class-B level, or convert the building to an entirely different use, which can be challenging and expensive. 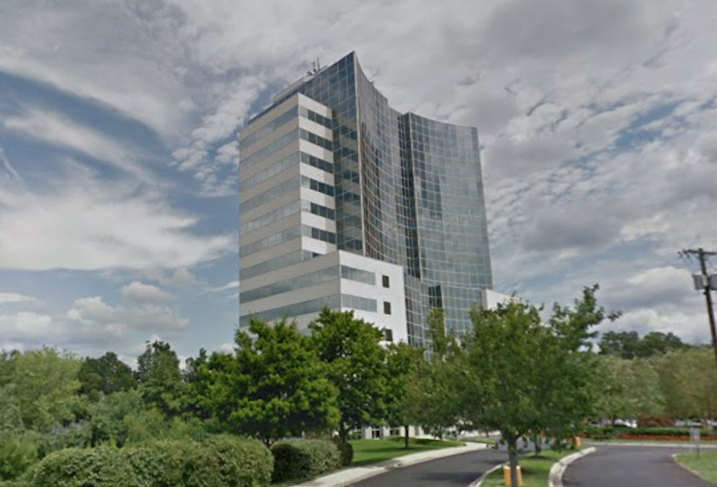 Suburban Maryland experienced a positive net absorption of 341K SF, according to JLL, better than both DC and NoVa. Prince George's County had strong demand driven by government activity, with the Food and Drug Administration signing on for 100K SF at 11785 Beltsville Drive in Beltsville. With two of the three potential FBI HQ sites in the county, there is a good chance the General Services Administration could continue to drive Prince George's County's growth.

"The relative lack of affordable metro-centric developments in other locations may be a catalyst for Prince George's County and a lot of federal demand at this point is being displaced from high-cost markets like DC," JLL director of U.S. office research Scott Homa said. "Natural economic forces are driving government tenants to Prince George's and will likely continue to do so over the long term, especially with this administration focused on reining in the cost of government."

The cybersecurity industry is poised to be a future demand driver for the county as companies look to locate near the National Security Agency in Fort Meade.

"Cybersecurity is also a segment of government spending that was not reduced during the Great Recession and its aftermath because it is important in the next front of the war on terror," Paul said. "I think suburban Maryland will benefit from the increase in cybersecurity. It will be an important driver of future office demand."

In Montgomery County, Marriott International's decision to move its HQ to downtown Bethesda is drawing more tenants to look at that submarket and has landlords feeling good about Bethesda's future. While suburban Maryland has only 75K SF of new office product delivering this year, both Carr Properties and JBG Smith are looking at building spec office in Bethesda over the next couple of years. 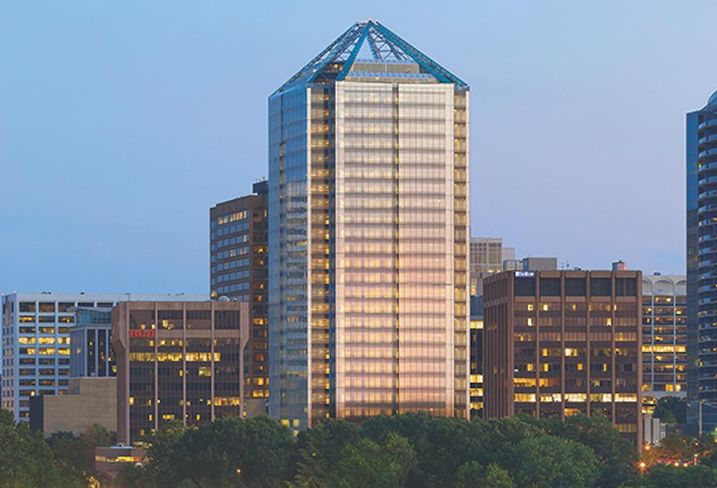 Arlington County had 432K SF of leases signed in Q1, the most notable being Nestlé's decision to move from southern California to 1812 North Moore in Rosslyn. The move made landlords and economic development officials optimistic about the likelihood of other companies following suit, which appears to be close to happening.

Cushman & Wakefield regional director of research Nathan Edwards said he knows of multiple large companies in the data, government contracting and financial services sectors looking at the NoVa market. He expects at least two big deals will close this year in the Dulles Toll Road corridor for hundreds of thousands of square feet each.

"The market is more active from a large user perspective than it has been in years," Edwards said. "It has a lot of owners and developers pretty bullish."