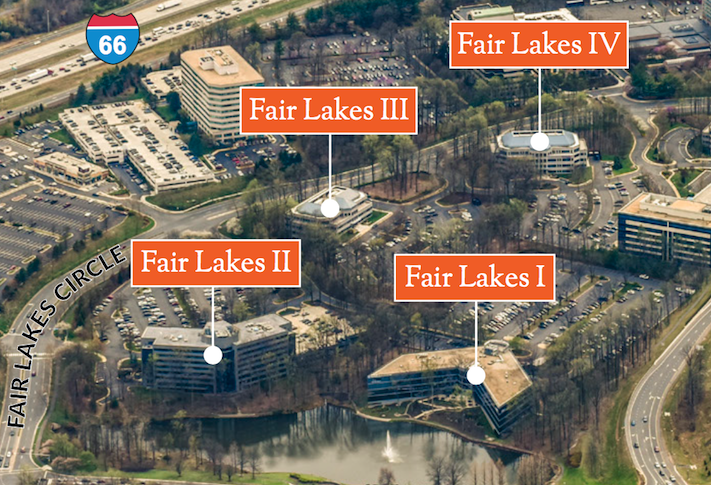 UPDATE, MAY 21, 4:05 P.M. ET: This story has been updated to include more information on the buyer and its plans for the properties.

Five buildings in a Fairfax County office park that went into foreclosure in 2016 have just traded hands.

The first four buildings, built between 1985 and 1989, total about 468K SF. An HFF brochure marketing the four properties says they are 88% leased and include the headquarters for General Dynamics Mission Systems.

Fair Lakes V sold for $8M to Fair Lakes Five LLC, an entity registered to a single-family home in Vienna. The 104K SF building, constructed in 1989, was not included in HFF marketing materials.

The buildings sit on Fair Lakes Circle near the interchange of the Fairfax County Parkway and Interstate 66. They are part of the 650-acre Fair Lakes mixed-use development planned for 1.3M SF of office, 2M SF of retail, 2,000 residential units and a 338-room hotel.

The five buildings are part of a nine-asset portfolio that went into foreclosure in 2016 after owner Shorenstein Co. attempted to modify its $259M loan but had its proposal denied, GlobeSt. reported at the time.

A report sent Tuesday from CMBS researcher Trepp said the special servicer for the portfolio noted that five of the nine buildings sold in recent weeks. It said the sales resulted in repayment on some of the debt and the loan on the portfolio appears close to being fully resolved.

The report said the foreclosure was caused by a tenant occupying 21% of the portfolio that vacated in January 2016, triggering a default on loan payments the following month.