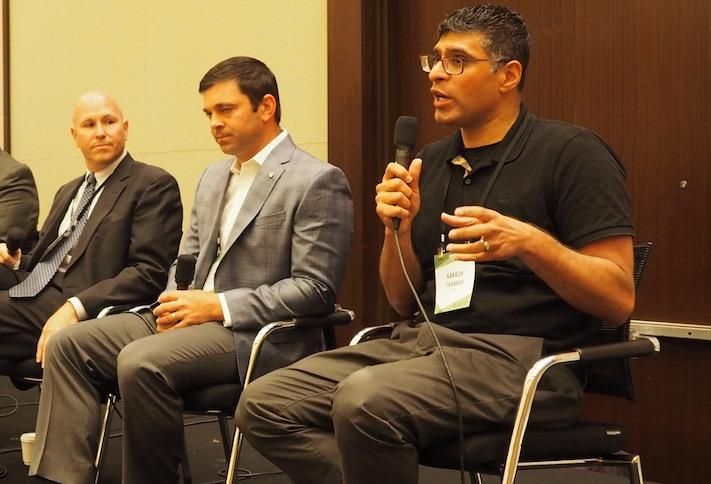 Traditional suburban office parks can have a hard time landing tenants in today's market, and developers see adding housing as a way to improve the viability of the properties.

He cited the example of EYA building 168 townhouses on a parking lot in Montgomery County's Rock Spring Office Park that had once been planned for additional office. He said the success of EYA's townhouse project led the county to rezone the entire park to allow more residential.

"The goal of that area is now for it to become a vibrant, mixed-use neighborhood that has places to eat, shop, work and live," Thakkar said. "The idea there is ultimately to bring those vacancy rates down because you're creating a place where people want to be. We think there are opportunities throughout the region to find places that are single-use and make them more mixed-use." Lantian Development CEO Bob Elliott said his company has a similar strategy of building mixed-use projects on old office parks and bringing down the region's vacancy rate. But unlike the strategy at Rock Spring, he said he isn't looking to retain existing office buildings and try to spur new leasing.

"We look for value in campuses that could be totally redeveloped," Elliott said. "We're not that interested in the office space. We're interested in the opportunity to make something new. Whether that's multifamily residential, whether that's townhouses and retail, we are ultimately looking for a strategy to create a new vision and take that old office campus offline."

He said this is the strategy for Lantian's 31-acre Rockville property, where it plans to begin demolishing the seven existing office buildings to make way for its 1.3M SF mixed-use development. It also owns a 201-acre site in Clarksburg, but that project is more long-term and it is looking for interim uses to bring in revenue from the existing buildings before beginning development.

"We've basically taken the approach that none of the buildings are worth saving, at least for the projects we've got," Elliott said. "We go in with the assumption that we need to figure out how to make those buildings survive with an interim use until the full plan is built out. While developers seek to add residential and other amenities to old office parks, the corporate tenants that once occupied those properties are looking for places that haven't traditionally had office.

"The most important thing is live-work-play and placing buildings in areas that historically had residential and retail," Truss co-founder Thomas Smith said. "That's where people actually want to work. They don't want to be in the trophy buildings in the CBD nearly as much as how things used to be."

Smith said he can use the Truss brokerage platform to create a heat map of the areas where tenants want to locate and the areas where office availability exists, and they often don't overlap. Building new office projects in the types of neighborhoods where tenants want to be can sometimes present a challenge, but Smith said the developers who overcome the roadblocks will be rewarded.

"Developers that can figure out how to change the scale of the new developments to do with smaller footprints in areas that may have challenging zoning, if you can crack that code, that's where people want to be," Smith said.