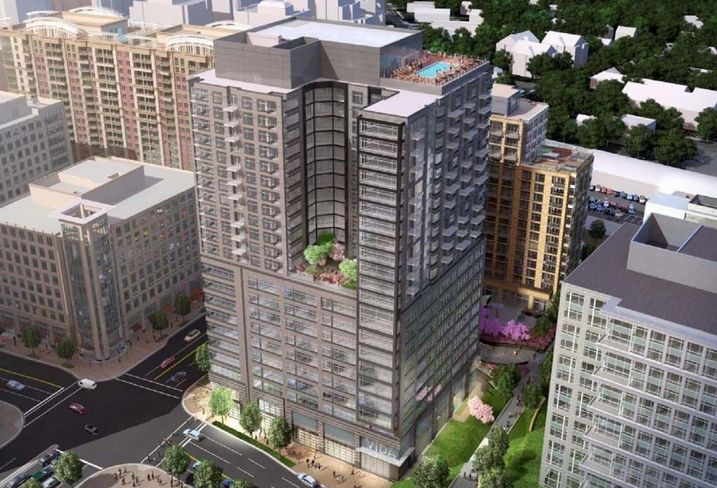 The vertical mixed-use building Shooshan Cos. has planned for the final phase of its Liberty Center complex in Ballston just landed its first office tenant.

Multifamily REIT AvalonBay Communities will move its HQ across the street from 671 North Glebe Road to Shooshan's planned 22-story tower at 4040 Wilson Blvd. JLL's Herb Mansinne and Robert VeShancey brokered the deal on behalf of the landlord.

Shooshan had originally planned an office building for the eighth and final phase of Liberty Center, but last year pivoted to a mix of office, residential and retail. The revised plan, approved by Arlington County in July 2016, calls for retail on the first two floors, followed by eight floors of office and 12 floors of residential on top. Shooshan, in partnership with Brandywine Realty Trust and Clark Construction, plans to break ground on the project in Q1 with a projected delivery of Q2 2020.

“When we decided to amend 4040 Wilson to a mixed-use building consisting of roughly a 50/50 split of office and residential and increased retail last year, we did so in an effort to adjust to the recent market trends which consisted of more prospective tenants in the +/- 75,000 SF range, and more retail demand along Wilson Blvd.,” Shooshan Cos. Leasing Director Kevin Shooshan said in a release.

The developer signed VIDA Fitness to anchor the retail with a 30K SF gym, its first outside of the District. Following the AvalonBay lease, it now has 117K SF of office space available.

When the project delivers, it will mark the completion of Shooshan's 2.25M SF Liberty Center complex. The developer sold one of the office components, Two Liberty Center, to Westbrook Partners last month for $72M after signing co-working provider TechSpace at the building in October.