A Toronto-based developer with a huge New York portfolio, including a stake in the transformational Hudson Yards project, is breaking into the DC real estate scene in a big way. Oxford Properties Group has made four major investments since 2012, including two upcoming downtown office projects, and plans to continue growing. 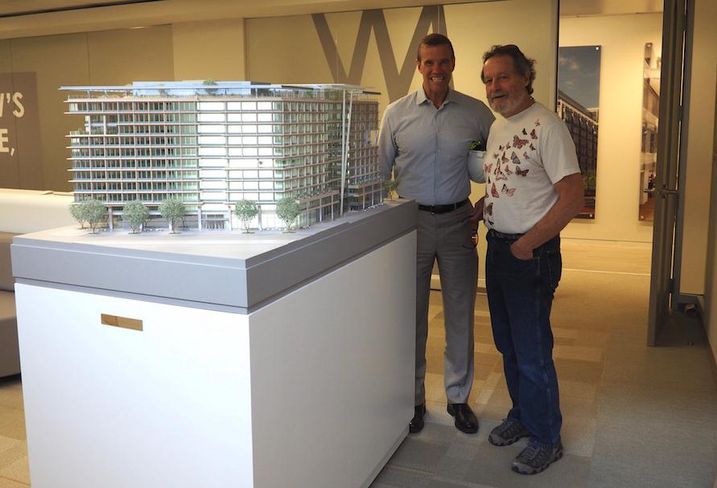 Oxford has partnered with Gould Property Co for the two development projects. Above, Oxford SVP Chris Mundy poses with Gould president Kingdon Gould III next to a model of 900 New York Ave NW, a 620k SF trophy office and the final piece of CityCenter they hope to break ground on soon.

Chris says he hasn't decided if they will build 900 New York on spec, as the JV did with its other project, 600 Massachsuetts Ave NW.

Oxford also has a 50% stake in 1001 G St NW, a 350k SF office building, and has an interest in Gallery Place, the 550k SF mixed-use building adjacent to the Verizon Center. When 900 New York is built, it will give Oxford a DC portfolio of 1.9M SF, which would put it at No. 2 on the list of top foreign investors in DC real estate (if the firms above it don't also grow).

"We'd like to grow more," Chris tells Bisnow. "We're continuing to look all over the city." 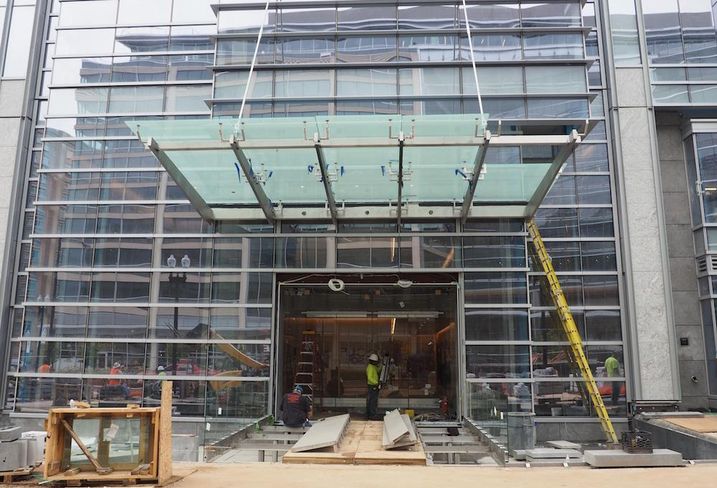 After building on spec, the JV signed law firm Venable to occupy 245k SF. Just this morning, Bisnow has learned exclusively, the JV signed communications firm Brunswick Group to 22k SF. With another two or three leases expected to be signed in the next month, Chris says the building will be 90% leased when it delivers.

The Massachusetts Avenue entrance, above, has a shiny glass and aluminum façade and a visible underground water feature that will run under the walkway along the side of the building. 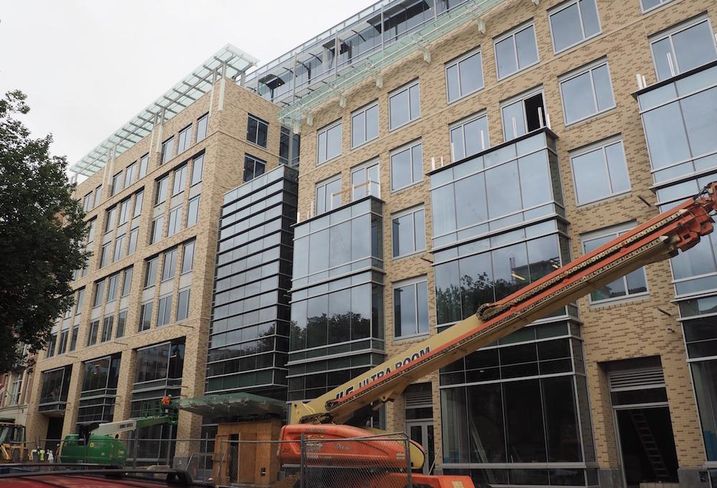 On the I Street side, Core Architects designed a strikingly different façade aimed at blending in with the surrounding townhouses.

"If you had done on this side what you did on the other side," Chris says, "it would have been out of step. This has a neighborhood feel."

Chris says Oxford likes the East End, where all four of its investments have been made, because of its proximity to residential and the presence of major destinations like the Verizon Center. 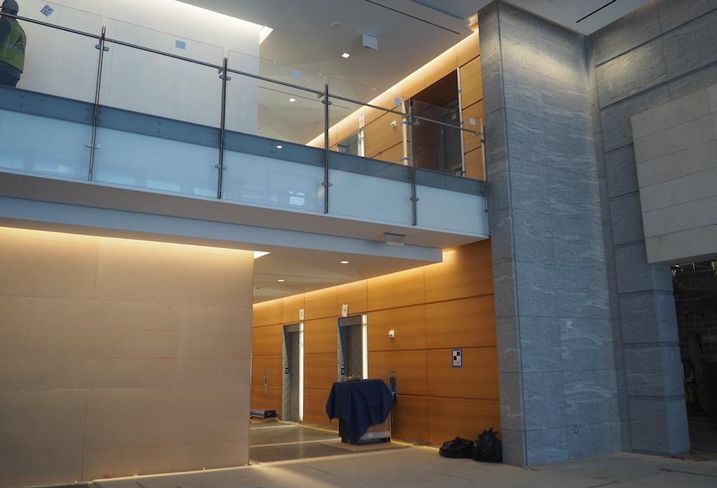 In the lobby, they are working on an opaque glass fixture for the mezzanine on the left that will be finished by the time the building delivers.

The stone wall on the right will be Venable's private entrance. The law firm is currently building out its space and plans to move in in April from its offices in Terrell Place, a few blocks south. 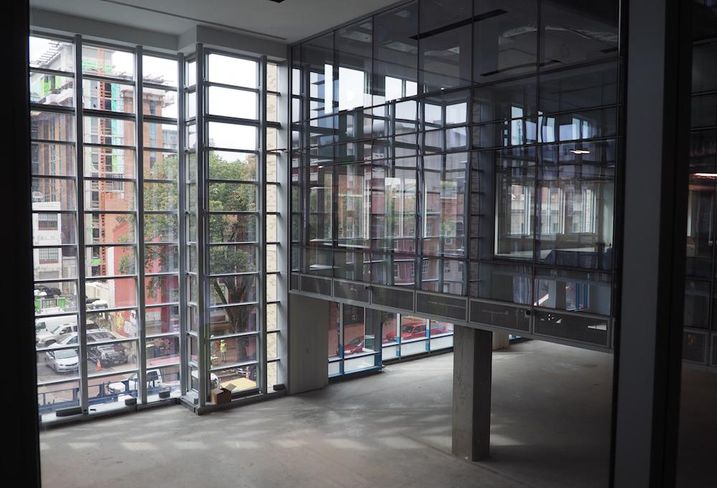 On the third floor, Chris says they sacrificed some rentable space in order to bring more light in and create an open feel. The third floor stops mid-plate, as you can see above, and the second-floor space directly below it is some of the only vacant floor space left in the building. 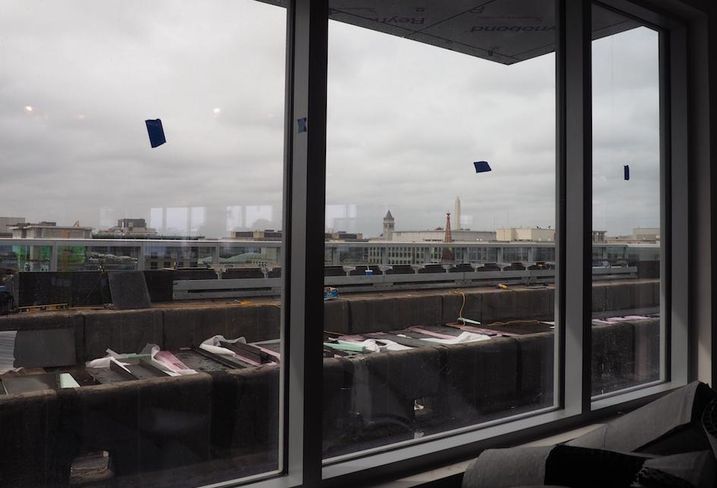 On the 10th floor terrace, Venable is building a bocce court with views of the Washington Monument and the Old Post Office clocktower.

The building will also include a 4k SF fitness center and a 4k SF conference facility on the concourse level. 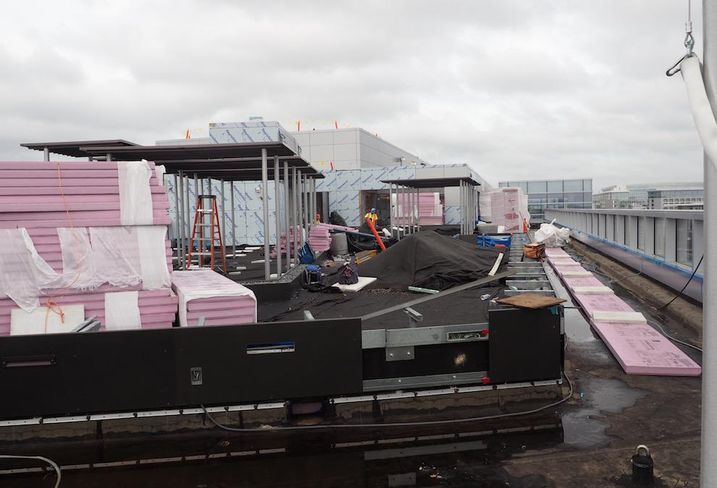 On the rooftop, the developer is working on a 20k SF half-indoor, half-outdoor terrace.

"With the scale of this rooftop and the level of finish, detail and landscaping," Chris says, "you could have a huge event out here, a Bar Mitzvah or a wedding even."