JBG Smith Turns Its Eyes, And Wallet, To Crystal City 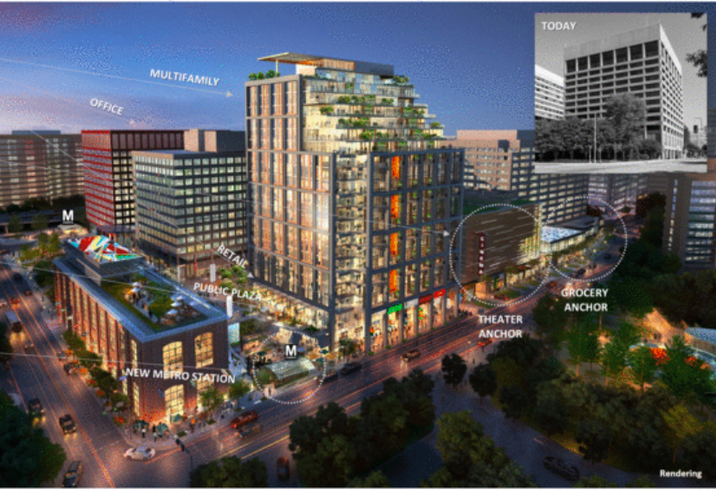 The newly formed JBG Smith has development sites throughout the D.C. region, but it appears to be focusing most on one neighborhood where its footprint is especially large.

JBG Smith CEO Matt Kelly said Crystal City will be a top priority and garner the most attention from the developer, the Washington Business Journal reports.

The public development firm, which began trading on the New York Stock Exchange Tuesday, is a result of the merger between The JBG Cos. and Vornado's D.C. arm, which had amassed an extensive Crystal City portfolio. JBG Smith now controls more than 20 Crystal City office properties, many of which are obsolete, vacant and slated for redevelopment.

The neighborhood is full of concrete, Brutalist-style buildings, and Crystal City BID President Angie Fox said her organization has been helping improve it by installing artwork and programming events. But with the focus of D.C.'s largest developer, she said the neighborhood will really begin to transform.

"We've been doing what I like to call a software upgrade," Fox told Bisnow after leaving a meeting with JBG Smith. "Now you have this group coming in, and I liken it to a hardware upgrade."

Fox said neighborhood residents have been excited since learning about the merger because JBG is well-known locally and has many successful placemaking feats under its belt.

"There was a sense that Vornado, even though they were based here, they were very New York," Fox said. "JBG is considered very local, and that helps with building trust with the community."

The first phase of JBG Smith's Crystal City development will transform 1750 Crystal Drive, adding six more floors to the 12-story building, converting the office component to residential, and building an adjacent 120K SF retail component. The retail will be anchored by Alamo Drafthouse Cinema, a movie theater with a full-service food and beverage menu.

“I think this sort of boutique movie concept is an excellent first move,” Fox said, emphasizing the importance of the arts in a neighborhood. “You build soul in a community when you have those aspects.”