Washington has always been a transient city, with politicians, lobbyists, contractors and other professionals traveling to the nation's capital for temporary trips.

But the residential sector catering to those short-term travelers, who stay longer than a typical hotel stay but not long enough to sign a traditional apartment lease, has recently begun to explode with new concepts entering the market. 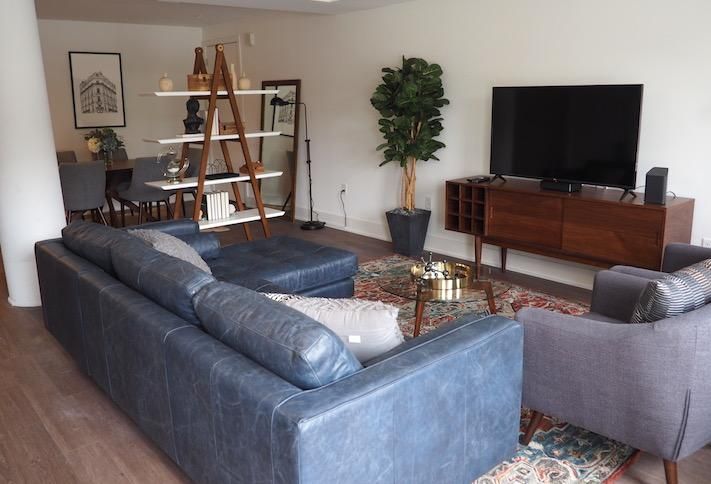 San Francisco-based corporate housing startup Zeus Living entered the D.C. market in October, its third city of operation, and in April opened its first full-building deal in Dupont Circle. It also rents out dozens of individual units across the city.

Blueground, a short-term housing company founded in Greece, entered D.C. last year as its ninth market. It now has about 50 units in D.C. neighborhoods such as Foggy Bottom, Mount Vernon Triangle, H Street and Capitol Riverfront.

Those two new entrants to the market operate by leasing apartments from building owners and renting them out with a minimum of a 30-night stay. But a growing D.C.-based company has been expanding throughout the region in recent years with a slighlty different concept.

WhyHotel takes large chunks of newly developed buildings and rents them out as pop-up hotels during their lease-up phase, providing a new revenue stream to developers as they work to fill hundreds of vacant units in a new building. The company has expanded throughout the region with deals in NoMa, Tysons and Arlington, and it is now expanding its business model.

The company, which spun off from New York-based developer Vornado, announced Thursday it is planning to begin developing buildings and operating them permanently with its hotel-apartment hybrid concept. It is looking for sites in the D.C. area now where it would either co-develop with a joint venture partner or build a new apartment project itself.

The announcement coincided with the launch of WhyHotel's new West Coast office in San Francisco, where it plans to introduce its original pop-up hotel concept before ultimately getting into development.

"The way we think about it, this represents the beginning of an asset class between multifamily and hotel, with physical buildings that resemble multifamily buildings but are designed, entitled and constructed for short-term space," WhyHotel CEO Jason Fudin said. "That allows you to have a dynamic space." 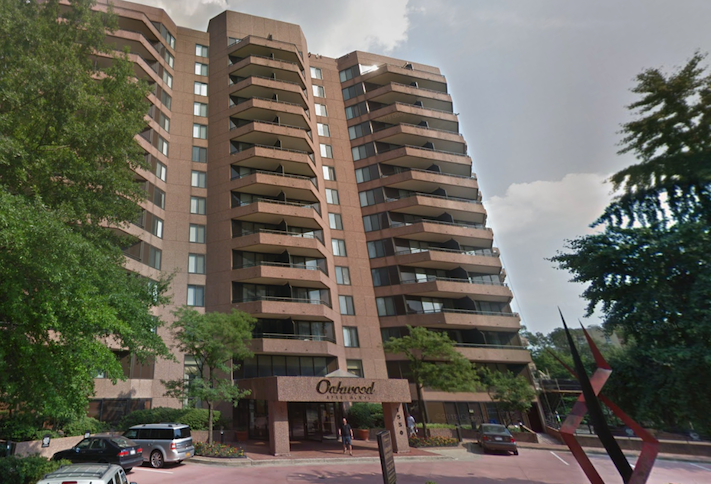 One of the oldest players in the corporate housing sector, Oakwood Worldwide, is also expanding its portfolio of buildings it owns and fully operates as short-term rentals. Oakwood's parent company, Mapletree Investments, bought the 184-Oakwood Arlington building in January for $70M from AvalonBay Communities. Oakwood had already managed the full building as corporate housing before the sale, but the acquisition cements its presence for the long-term.

Oakwood, which entered the D.C. market in the 1970s and now has over 80 locations in the region, has deals in the works to buy two more buildings in the D.C. area, Oakwood Senior Regional Manager Kathy Eicholtz said. She said the surge of millennials choosing to remain renters rather than buy homes has taken up supply that could otherwise have been corporate housing, pushing Oakwood to take steps to shore up its inventory.

"Millennials have really scooped up the inventory, so inventory has gotten extraordinarily tight," Eicholtz said. "Then our supply is reduced, and that creates an increase in pricing. So you're really at the mercy of the supply and demand of the marketplace. So that's why we recently went ahead and purchased the Arlington building." 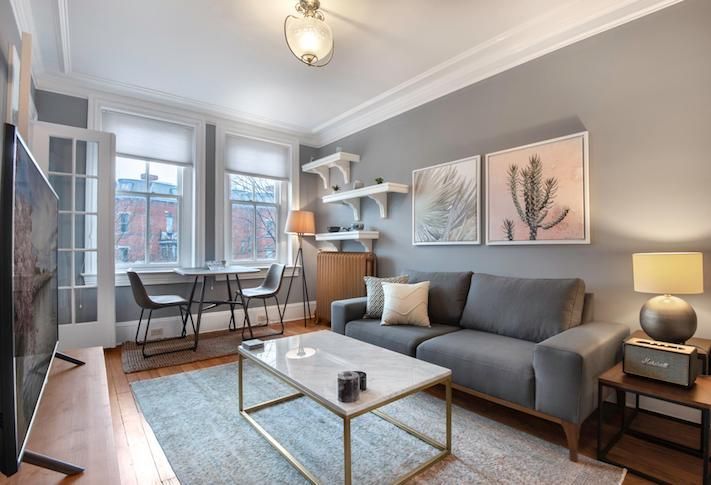 While millennial demand has taken potential inventory from the corporate housing sector, it has also sparked a boom of new apartment development that can create more opportunities for corporate housing companies to grow their presence in the market.

"We don't want to be in a city that's not growing," Nofzinger said. "It gives us enough openings to expand to the size we need to hit our growth targets ... We generally prefer newer buildings with modern amenities."

WhyHotel's business model of operating pop-up hotels during the lease-up phase of a building is even more focused on new development than corporate housing concepts, and Fudin said it has benefited from the apartment construction boom.

"Certainly the wind is at our back in the cycle in terms of the volume of units that are coming online," Fudin said. "But whether or not it's a supply constrained market or a high-growth market, the way developers fill up buildings takes over a year anyway. The inefficiency of brand-new, high-rise buildings exists everywhere all the time. And the more we've been able to prove the value of our concept, the more we're becoming a need to have as developers underwrite projects."

But many of the newer apartment buildings are in emerging markets like Capitol Riverfront and NoMa, while business travelers tend to want to stay closer to the central business district, Eicholtz said.

"We're targeting where our clients want us to be," Eicholtz said. "The key driver when someone makes a decision about where they're going to stay is convenience to their office ... Everybody is fighting for that core inventory."

Paradigm Cos., which owns a large portfolio of D.C.-area apartment buildings, once looked to get into corporate housing itself, Paradigm President Stanley Sloter said. The company furnished some of its apartments to lease on a short-term basis, but it soon found that its strategy wasn't working and it would be better off bringing in operators that specialize in that style of housing.

"We took as a business position that we will master lease units to corporate housing providers in some of our buildings where they want them, and it's up to them to do the marketing, move people in and out and make it work," Sloter said. "I think it is a component of the market that you need to meet."

As more startups have entered the corporate housing space, the market to master lease chunks of apartments in prime locations has become more competitive. Zeus Living Head of D.C. Real Estate Kyle Cissel said his company is looking to offer a more modern approach to the traditional corporate housing concept.

"You had the old school players and you have a lot of newer, fresher takes on the industry, and I think Zeus falls into that category," Cissel said. "Any industry that is around for many years needs an updated approach."

But Eicholtz, who has been in the corporate housing business for 30 years, expects the new players may hit some bumps in the road.

"It's a lot easier said than done," she said. "When you're building this kind of business, there's a multitude of touch points along the way from the very beginning of the process to the very end of the process. That's the piece that these other suppliers don't realize. While it looks like it's easy and you just put inventory online and book it, there are so many things behind the curtains." 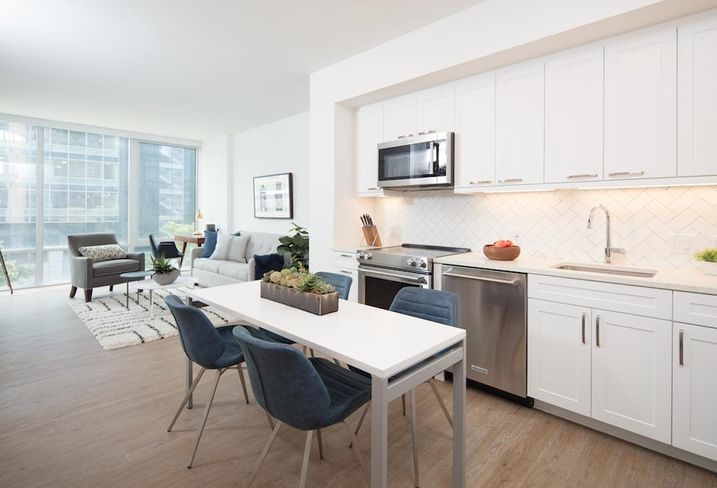 Courtesy of WhyHotel
One of the WhyHotel rooms at 100 K

Eicholtz believes the recent expansion of the corporate housing industry with new concepts stems from the emergence of Airbnb. The tech company that allows people to rent their homes to visitors with stays from one night to several months competes with corporate housing for customers, she said, but it has also brought the month-to-month housing concept into the mainstream.

"Airbnb has really put that kind of living in the eyes of the consumer," she said. "People now want that because it's cool and hip, and people figured out they can get a whole apartment for a month and spend less than a hotel ... It created a whole new market for our industry and that's what has been exciting, it has brought such a larger demand."

Cissel also pointed to Airbnb's growth as a turning point for the short-term rental sector that led to more corporate housing startups like Zeus Living, which was founded in 2015.

"The Airbnb era had a lot to do with it," Cissel said. "It gave residents an opportunity to lease space in a different nature."

Airbnb may have sparked the recent wave of short-term housing startups, but another West Coast technology company appears poised to usher in a new boom in the D.C. corporate housing market.

Amazon's HQ2 campus in Arlington is expected to generate new demand for corporate housing and other short-term hospitality concepts as its employees begin to move to the area and other companies seek to do business with the tech giant.

Oakwood, which already managed a full Crystal City building at 505 18th St. South, recently extended its deal at the property for another five years, Eicholtz said. She said Oakwood is already seeing demand from Amazon employees, but it is not just coming in Crystal City.

"We're actually seeing that when the requests come in, interestingly enough it's not just Crystal City, they are looking to have housing in the suburbs," Eicholtz said of Amazon employees.