Multifamily Investment Sales Market Starting To Heat Up In The D.C. Area

The D.C.-area multifamily market had been one of the hottest asset classes for investors leading up to the start of this year, and while the coronavirus paused dealmaking for a period of time, brokers are now seeing a strong increase in activity. 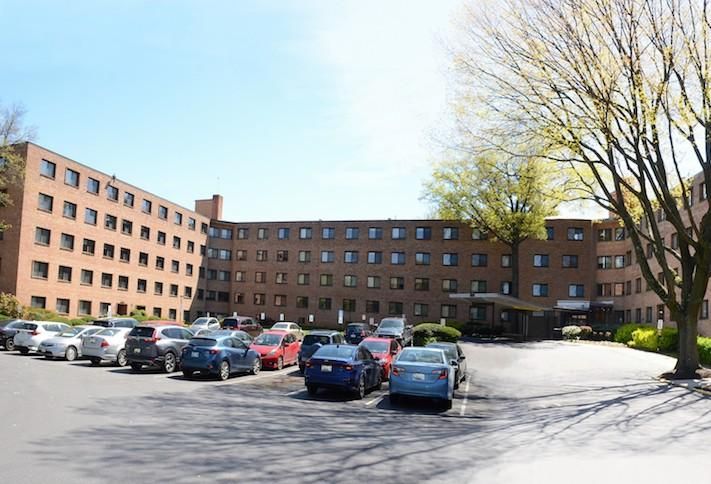 Apartment building sales that have closed during the last three months have largely been deals that were under contract prior to the crisis that the parties were able to push across the finish line, brokers say. But they are also seeing more new deals go under contract over the last month, and sellers are bringing a host of new properties to market.

"When there are people open for business, good debt out there and good quality properties that are performing well, there's no reason to stop and wait," Melnick Real Estate Advisors President Scott Melnick said.

The pandemic is still limiting the types of tours brokers can perform, and buyers typically do not want to commit to a property through only a virtual tour. But local investors who can drive to properties have been able to see some common areas and vacant units, brokers say.

These local, private investors have become the most active buyers in the market, brokers say, taking the place of large institutional players that remain on the sideline because of travel restrictions and other challenges. Some brokers said they have changed their marketing strategy to more directly target these private investors.

Many buyers have been holding out as they wait for the crisis to cause a drop in pricing, but brokers say this price decline has yet to materialize. Multifamily has remained stable as rent collections have been strong, and the asset class appears better positioned than other types of commercial real estate.

During the first week of May, Melnick began marketing the Suburban Hill apartment community, a 159-unit property at 8500 New Hampshire Ave. in Silver Spring.

His firm sent out the property details to a group of select investors, received strong interest and signed an agreement with a private investor in the first week of June. He declined to share the name of the investor or the price, as the deal has yet to close.

"It wasn't 'OK, let's wait until the world comes back,' it was, 'Let's market it differently,'' Melnick said. "We didn't blast it out to 10,000 people, we went to strong groups with local expertise and money who were not pencils down and created a very selected mini-marketing campaign. The group that got it, literally from handshake to going firm, it was three weeks."

Melnick said the deal is one of five multifamily sales his firm has under contract totaling over $100M. He declined to provide the details on the other deals that have yet to close, but he said they are in Alexandria, Fairfax, Frederick and Montgomery County. 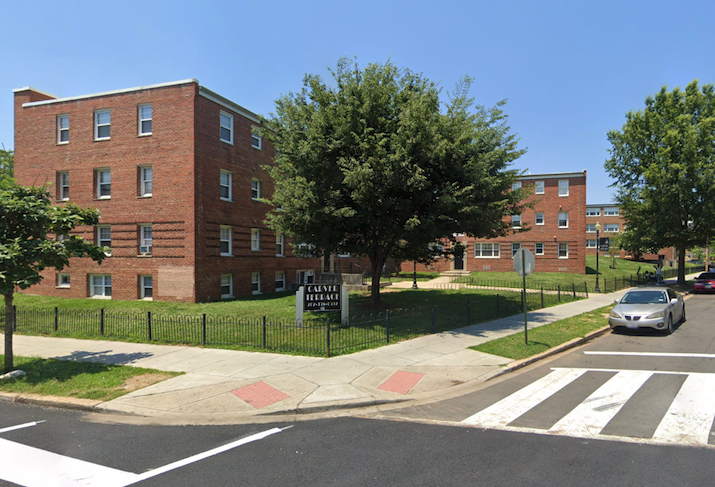 Berkadia Senior Managing Director Bobby Meehling said the early response has been strong, and he sees a large number of investors interested in buying D.C.-area apartments. He said there was a brief pause in the market in March, but he has seen activity pick up.

Berkadia has also been marketing a newly delivered 49-unit Capitol Hill apartment building at 818 Potomac Ave. SE on behalf of MMG Development, and Meehling said it has signed a letter of intent with a buyer. He also said it is marketing an 18-unit Georgetown property at 1305-1315 30th St. NW and has received multiple offers.

"Residential has always been strong and has remained strong through this, and I think the capital looking at these deals recognizes that," Meehling said.

Tuesday morning, Transwestern began marketing a 240-unit apartment community in Silver Spring, The Point at Hampton Hollow. Transwestern Executive Vice President Dean Sigmon said it is the first of four apartment properties the team plans to bring to market in the coming weeks. 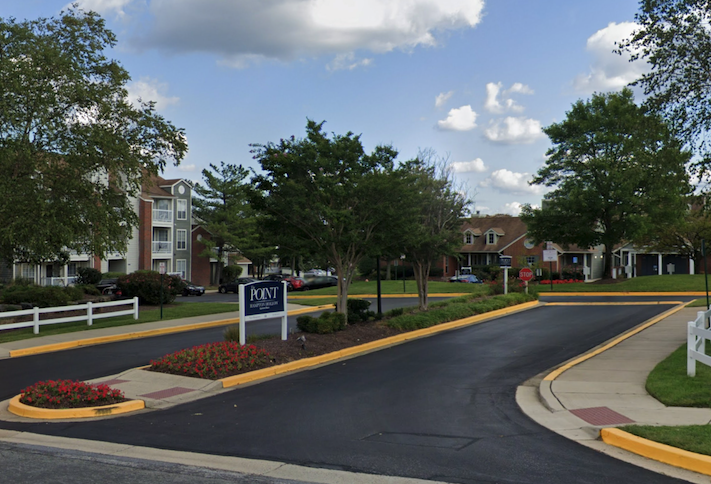 Google Maps
The Point at Hampton Hollow, an apartment community in Silver Spring that Transwestern is bringing to market.

Sigmon said the team had planned to start marketing some of the properties earlier in the year but hit the pause button because of the coronavirus.  Now, he said multiple months of rent collection have shown that the properties are still performing well, and he is seeing investor interest in the market heat up.

"We believe there is a lot of pent-up demand for people starting to get out and look at deals," Sigmon said. "The money is going to flow here into value-add multifamily, and we believe it's the right time to start bringing deals out."

Walker & Dunlop Managing Director Chris Doerr said he also sees now as the time to bring apartment properties to market. He said his team recently began marketing two properties in the region, but he declined to disclose the details. He also said they are pursuing an atypical marketing campaign, only sharing it with a targeted group of select investors.

Doerr said there was a one- to two-month pause in new deals starting in mid-March, but he has seen activity increase over the last few weeks.

"Things slowed down a little bit, but things are really picking back up again," Doerr said. "Multifamily is very active, especially in the D.C. area."

The buyer pool is not as deep as it was before the coronavirus, brokers say, as large institutions such as REITs, life insurance companies and private equity firms have slowed their activity.

"Institutional capital has been more on the sidelines because they're just not as sure where the market's headed, and also because it's harder to travel," Melnick said. "So that has created an opportunity for local buyers." 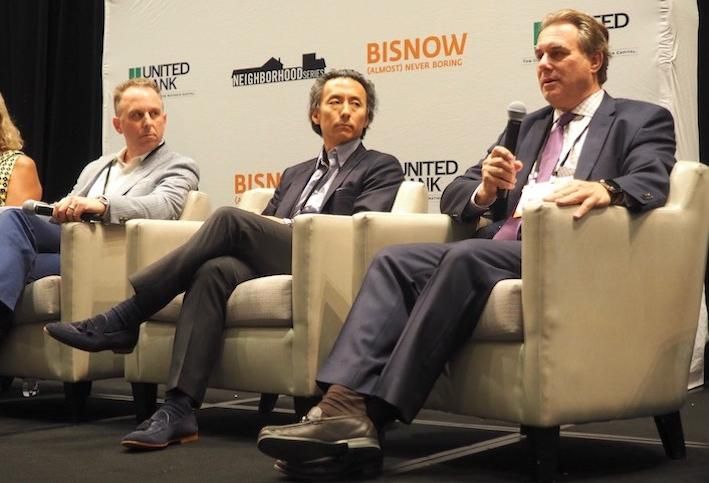 Melnick said he is also working with several private investors who have sold properties and are looking to flip the money into an acquisition using the 1031 Exchange program.

The IRS extended the window for 1031 investors, giving any parties that had deadlines between April 1 and July 15 to identify or close on a property until July 15 to complete the transaction. Melnick said this has not stopped 1031 investors from looking to buy properties, but they have become more conservative about the amount of debt they look to put on their acquisitions.

"A lot of 1031 clients that had $15M in cash and wanted to leverage it up and buy a $40M or $50M property, we've seen as the coronavirus has affected the market people are being a little safer or more conservative," Melnick said. "So if somebody has $15M, instead of leveraging to $50M they'll say let's buy all-cash for $15M or $20M."

As of March 1, Doerr said he would have described D.C.-area multifamily investment sales as an institutional market dominated by REITs, private equity funds and insurance companies. But he said the crisis has changed that landscape significantly and shifted it toward local buyers.

"Right now, the challenge for those [institutional] groups is some of them can't travel," Doerr said. "This has been a chance for private capital and the high net worth groups to fill that space. They look at it as an opportunity where they don't have to compete with the institutional guys."

Some investors had been holding off from making acquisitions because they anticipated the crisis would bring down prices, but brokers said that has not happened.

"People with lots of money, even if they're open for business, they might be expecting pricing to come down 10% or 15%, but we haven't seen pricing come down," Melnick said. "The deals we're working on post-coronavirus, the pricing has ended up as the same pricing we projected before." 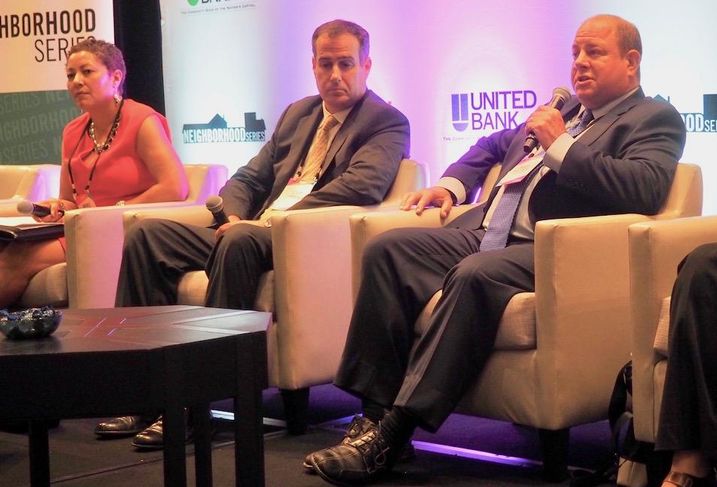 Transwestern Executive Vice President Robin Williams also said he has seen a disconnect between the discounted price buyers want and what sellers have been willing to offer.

"Pricing seems to be holding up fairly well," Williams said. "Buyers seem to be hoping that there's some discount from pre-COVID, but with the transactions taking place, there has not been any significant discounts."

Multifamily asset prices have remained stable because apartment rent collections have continued to come in higher than many expected, and residential property appears better positioned than retail, hospitality or office.

D.C.-area multifamily has been especially attractive, brokers said, because the market has proven to be resilient during economic downturns, with federal government spending providing a backbone to the economy.

"Obviously multifamily is easier to do than hotel or retail right now where you don't necessarily know where the income is, and multifamily collections have been stronger than anticipated," Melnick said. "But in D.C. they've been stronger than most parts of the country because we have a pretty stable employment base that the federal government helps, as opposed to being in Orlando or Las Vegas or somewhere tied to hospitality."

Williams said he is seeing investors pull money out of the retail, hospitality and office sectors and look to deploy them into more stable multifamily properties.

"Equity that had been in other asset classes such as retail and office are now taking a stronger focus on multifamily," Williams said. "I think that's going to be part of what holds up pricing in our market, is the amount of capital seeking the more stable returns that multifamily provides."

In addition to multifamily being more attractive than other commercial real estate sectors, Doerr said it is also a better option than most overall investments available in today's market.

"If you think about your investment options, you look at the 10-year Treasury, it's very low and the stock market is all over the place," Doerr said. "Other asset classes like retail and hospitality are more challenging and will take longer to come back ... you look at the returns for multifamily and they're good."

Doerr said he expects to see a wave of deals closing in the second half of the year, as sellers are beginning to bring properties to market and investors have money they have been waiting to deploy.

"I think there is a lot of money on the sidelines that's waiting and wants to buy, and multifamily is an asset class that they want to be in," Doerr said. "As travel starts to be more readily available, I think the second half of the year is going to be fantastic in investment sales."