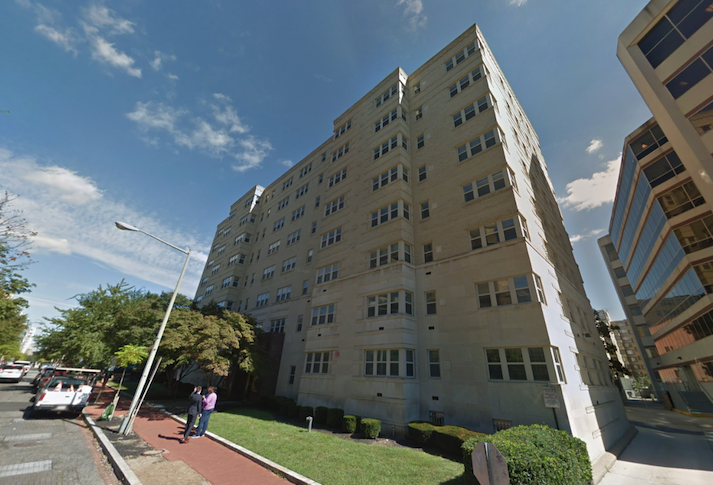 Google Maps
The office building at 515 22nd St. NW that Insight plans to convert to apartments

A Foggy Bottom office building will soon be turned into apartments after the State Department moves out this year.

The eight-story office building sits four blocks from the Foggy Bottom Metro station and within two blocks of George Washington University and the State Department headquarters. The State Department had occupied the office space in the building, but plans to vacate this year, at which point Insight will launch a conversion project.

The project will turn the office building into a 153-unit apartment building with amenities including a fitness center, a lounge and three roof decks. Insight has previously completed such projects at The Apollo on H Street, and it is currently working on additional projects on H Street and Capitol Hill.

The deal was structured as a ground-lease transaction with Safety, Income & Growth acquiring the land and executing a 99-year lease with Insight, which will own and operate the building. Financing was provided by iStar through a first mortgage leasehold loan.

"It truly benefits them in separating the land from the property," Safety, Income & Growth Executive Vice President Tim Doherty said. "This really helps them get a return, and this location is an amazing piece of land. Separating this out made sense from them in the conversion process."

Safety, Income & Growth, a New York-based REIT trading under the ticker SAFE, specializes in ground-lease deals. It buys land for new developments, renovations and existing properties and leases it back to developers to help them capitalize their properties, while maintaining a stable portfolio of valuable land itself.

The REIT had $751M in total assets as of Sept. 30, according to its website. It has executed six ground-lease transactions in D.C., including last year's acquisitions of the Onyx on First apartment building with Urban Investment Partners and the 1111 Pennsylvania Ave. NW office building with PRP Real Estate Investment Management.

Safety Income & Growth CEO Jay Sugarman said he founded the company in 2017 to focus on ground-lease deals because it makes more sense to separate the ownership of land from buildings. Land tends to be a longer-term investment with modest returns, he said, while building owners are seeking higher returns in the mid-teens and often looking to flip properties within a decade.

"We feel like those two very different investment should be owned by two different types of investors," Sugarman said. "We believe the ground-lease business is an opportunity to fundamentally rethink how lots of real estate owners own real estate."