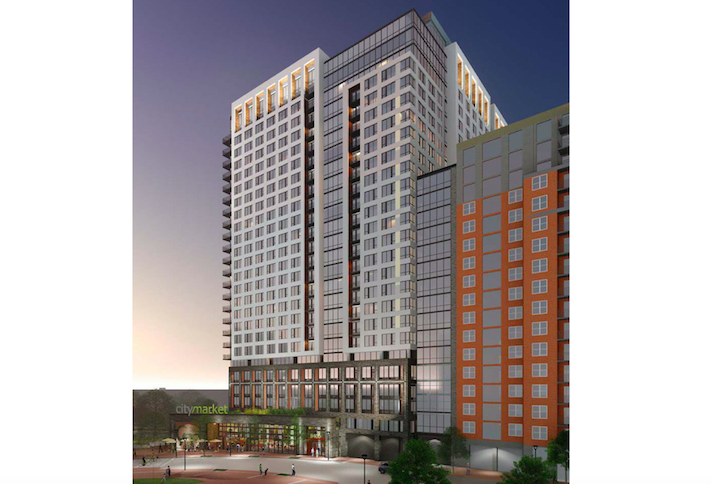 A new project planned to begin construction in the coming months would become Silver Spring's tallest building and bring the first food hall to the Maryland suburb.

Washington Property Co. announced Tuesday it plans to bring a 15K SF food hall to the ground floor of Solaire 8200 Dixon, a 26-story apartment building it plans to start building early next year.

The developer expects to deliver the 403-unit apartment building in mid-2022. The project will be built about a half-mile from the Silver Spring Metro station on a site formerly occupied by the nonprofit Shepherd's Table. Washington Property Co. partnered with Montgomery County to build a new home for Shepherd's Table at 8106 Georgia Ave. in 2016.

Colicchio Consulting, a division of Cushman & Wakefield, is working with the developer to plan the food hall, select an operator and curate the vendors. It would be the latest in a series of food halls to open in the D.C. region, a trend that is occurring in cities throughout the country.

"Food halls are not a trend or a fad," Colicchio Consulting founder Phil Colicchio said in a release. "Rather, they are an evolution in dining out, taking cues from the shared economy model."

The tower is planned to include a fitness center, a pool and a lounge on the rooftop, plus additional amenities such as a coworking facility, a catering kitchen and a pet spa. Design Collective is the architect on the project.

The development is Washington Property Co.'s fifth Solaire-branded apartment community in the county, including two completed buildings in Silver Spring, one in Wheaton and one in Bethesda.