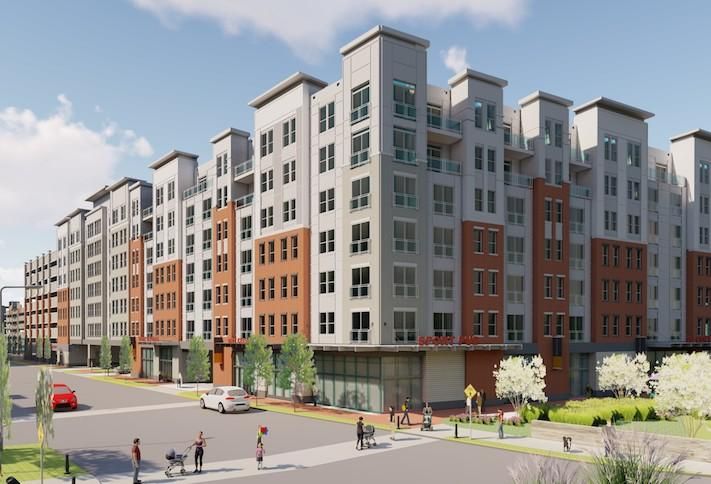 A Fairfax County development once planned as entirely office buildings is now moving toward mixed-use.

Monument Realty announced Wednesday it received approval from the Fairfax County Board of Supervisors for a 300-unit multifamily project at the planned Liberty View development.

The 879K SF Liberty View is planned for a 13.4-acre site at the corner of Franconia-Springfield Parkway and Beulah Street, near the Francionia-Springfield Metro station. It was previously envisioned as an all-office project, but market demand couldn't support that much office, and Monument last year applied for an amendment, the Washington Business Journal reported.

With the latest approval, Monument has the option to switch a second planned office building to residential and substitute a third office building with a 250-room hotel. Monument is partnering with New York-based Atlas Capital Group on the project.

Pivoting office projects toward mixed-use developments is a growing trend in Fairfax County and other suburban jurisdictions as companies look to lease office space in amenity-rich, urban areas that will attract young talent.

The 300-unit apartment building, the first phase to move forward at the project, is expected to break ground in early 2021, according to WBJ. The building also has the option for 13K SF of retail. Its planned amenities include a swimming pool and a fitness center.

"We are extremely pleased by the prospect of bringing a mixed-use development to this important Metro location,” Monument President Russell Hines said in a release. “With the new TSA headquarters opening in 2020, the recent renovation of the Springfield Town Center and the Amazon announcement [last] year, the Franconia-Springfield area is well-positioned to welcome new residential, hotel, retail, and office development to an area that has great market fundamentals."