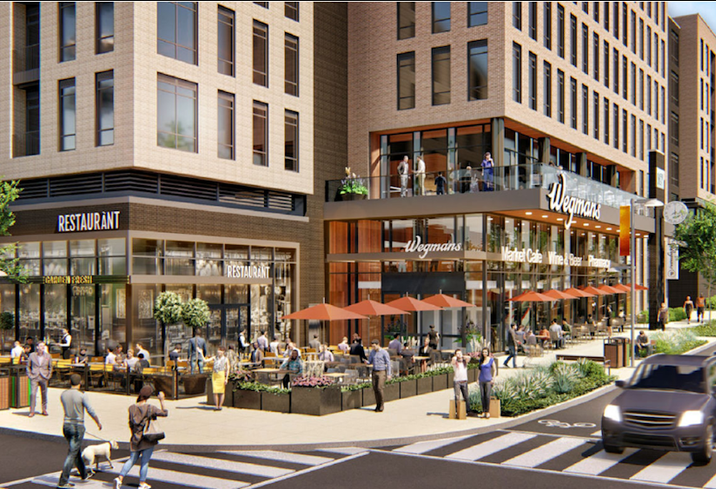 The proposed Wegmans would be another urban-format store, sitting on the ground level of a 380-unit apartment building. The retailer has increasingly signed on to mixed-use developments, rather than its traditional suburban format, as it increases its D.C.-area presence.

The Reston Crescent site, located just south of the Dulles Toll Road-Reston Parkway intersection, is currently occupied by two six-story office buildings. Brookfield plans to keep those buildings, constructed in the last 20 years, and build another 1.5M SF of office, 1,721 residential units, 380K SF of retail and a 280-room hotel.

County planning staff recommended denial of the submittal, citing insufficient transportation improvements, but a Brookfield spokesperson told the WBJ he expects the issues to be sorted out soon. The latest proposal differs slightly from the plans Brookfield originally filed in 2016. The planning commission is scheduled to consider the proposal at its June 28 meeting.

On the other side of the Dulles Toll Road near Reston Town Center, Boston Properties and JBG Smith are both planning major mixed-use developments that could bring another 5M SF to the area around the future Silver Line station, expected to open in 2020.

Wegmans has rapidly ramped up its D.C.-area growth. The Rochester, New York-based retailer earlier this month opened a store in Chantilly, and it has another one under construction in McLean. The grocer also has signed on for locations in Northwest D.C., Alexandria, Rockville and southern Loudoun County.