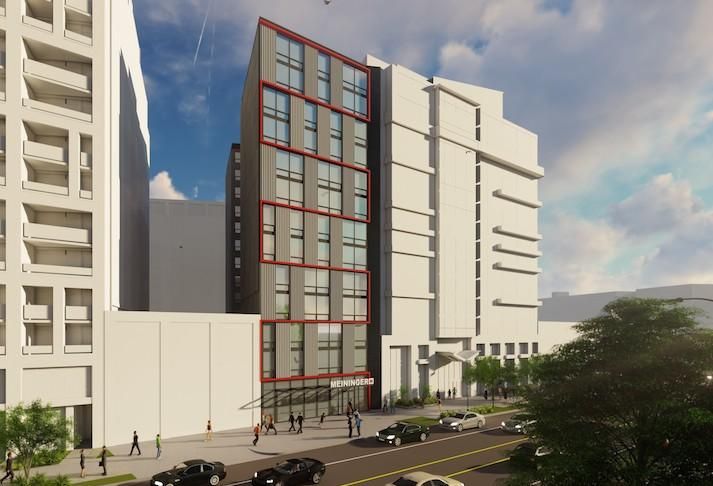 European hostel-hotel concepts with large shared rooms are beginning to grow their presence in D.C., with the latest in the emerging hospitality market of NoMa.

Berlin-based Meininger Hotels signed on with Altus Realty as the flag for its 154-room hotel at 35 New York Ave. NE, the Washington Business Journal reports.

While the hotel will have 154 rooms, it will have four times as many beds — 616 in all. The rooms will range from double-bed rooms to larger, multi-bed rooms. It will also feature public areas on two floors with a bar, lounge, kitchen, breakfast area and game zone. Expected to open in 2020, the hotel will be the first U.S. location for Meininger, which has 24 hotels in Europe.

"With an abundance of school and youth groups visiting, cultural offerings and as the political centre of the country, Washington D.C. is the ideal city to introduce Meininger to the North American market," Meininger CEO Hannes Spanring said in a release.

The 13-story hotel will have 74,500 SF of total space. Altus Realty is working with Fillat+ Architecture, CBRE, Morrison & Foerster and LWHA on the project. The developer in July paid $5M for the vacant, 6,400 SF lot, which sits within two blocks of the NoMa-Gallaudet Metro station.

The project continues the growth of the hospitality market in NoMa and Union Market. Directly next door is the Hyatt Place, which opened in 2014. Several trendy brands have recently signed on for new hotel projects in the neighborhood, including The James Hotel at 1200 Third St. NE, Virgin Hotels at 411 New York Ave. NE and Mob Hotel at the corner of Fifth Street NE and Florida Avenue.

Meininger is the second European hotel brand with hostel-style rooms to announce D.C. projects in the last five months. Generator acquired the Courtyard by Marriott in Dupont Circle in October with plans to convert it to its hostel concept, its second U.S. location.