'We've Got To Be Prepared': Amazon's Arrival Puts Pressure On Region To Prove Critics Wrong

As Amazon prepares to hire 25,000 workers in Northern Virginia over the next decade, and with an untold number of companies predicted to grow around the tech giant, the implications for Greater Washington's already-strained housing and transportation systems are enormous. 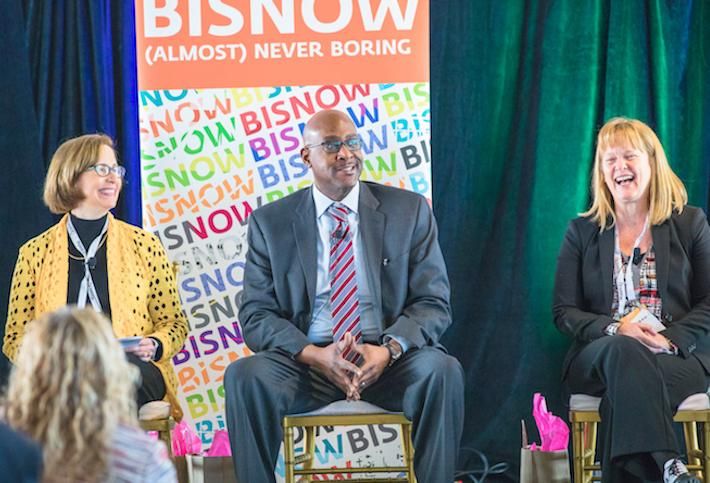 Amazon HQ2 is expected to spur additional growth in the area's technology industry and create new demand for an office market that has struggled with high vacancy, potentially filling its empty space and leading to new construction.

The region's top political and business leaders, speaking Thursday at Bisnow's Amazon HQ2-Apalooza event, looked ahead at the potential challenges and opportunities HQ2 could bring to the area and discussed how to begin addressing them.

"We as a local government, while being extremely excited about this, are also needing to sharpen some new tools and have some new perspectives to deal with unintended consequences," Arlington County Board Chair Christian Dorsey said.

One of the consequences Dorsey highlighted was the strain on the area's housing market. He said it is important to grow the housing supply to prevent displacement, while also planning for that population growth by expanding the capacity of the school systems and transportation network.

The region already has a housing crisis, Arlington Partnership for Affordable Housing CEO Nina Janopaul said. She said Arlington and Alexandria have lost 90% of their naturally occurring affordable housing units. With the coming growth from Amazon, she said the problem could get even worse.

"We've got to be prepared," Janopaul said. "This is about preparing for that change and investing in those systems so when that stress comes further onto our housing systems we're ready for it, and we can be an inclusive community as part of this growth and development." 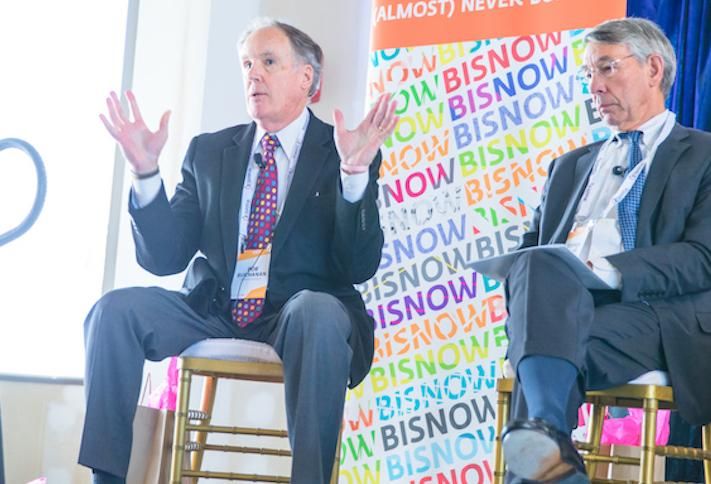 Officials see housing as a regional issue that needs to be solved by Virginia, D.C., Maryland and their local jurisdictions working together. The localities showed an unusual level of collaboration in their pursuit of Amazon, and the HQ2 sweepstakes helped mobilize leaders to secure a historic funding agreement for the Metro system. Buchanan Partners principal Bob Buchanan, also president of regional business association 2030 Group, said the Metro deal can be a model for how to address housing.

Even with funding secured, Metro is still working to solve its reliability problems, and the region has a host of other transportation issues that need to be addressed. Amazon's entrance will only increase the number of people commuting in the region, and Buchanan said local governments need to take major steps to encourage use of public transit and reduce congestion on the roads. 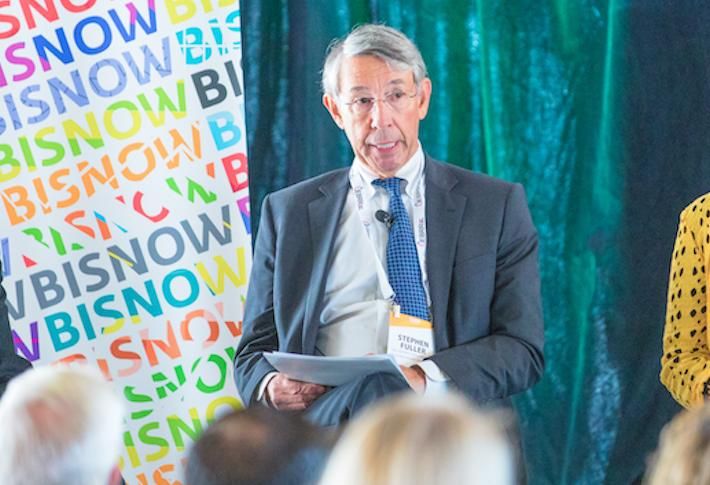 While already-burdened systems like housing and transportation could be strained by Amazon if not addressed, the area's long-struggling office market stands to benefit from the tech giant's growth, and it already has the space to accommodate plenty of new office demand.

The Crystal City and Pentagon City area that will house HQ2 has suffered from elevated vacancy for years following the Base Realignment and Closure Act, which led government agencies and contractors to relocate out of the market. The growth of Amazon and companies around it will help fill that space, and some expect it will provide enough demand for developers to start building speculative office.

In addition to the up-to-38,000 jobs Amazon has the potential to create in Arlington, George Mason University economist Stephen Fuller predicted another 22,000 jobs could come along to service the tech giant. These are not from competing tech companies that follow in Amazon's footprint, he said, but rather service sector jobs that will be supported by the billions of dollars in spending power Amazon's workforce will bring.

More companies could also choose to locate in the area because of the positive effects Amazon has on the region's brand, and new startups could emerge from Amazon employees and graduates of the Virginia Tech Innovation Campus planned alongside HQ2, both factors that could further boost office demand in ways that are harder to predict.

The region is predicted to add 378,000 jobs by 2030, Fuller said. Roughly 56% of those will be office-using jobs, and using a standard metric for office space density, he said that could create 41M SF of office demand over the next decade.

"It will take down some of the vacancy, but we need a lot [of new office space] to accommodate the future of this region," Fuller said. 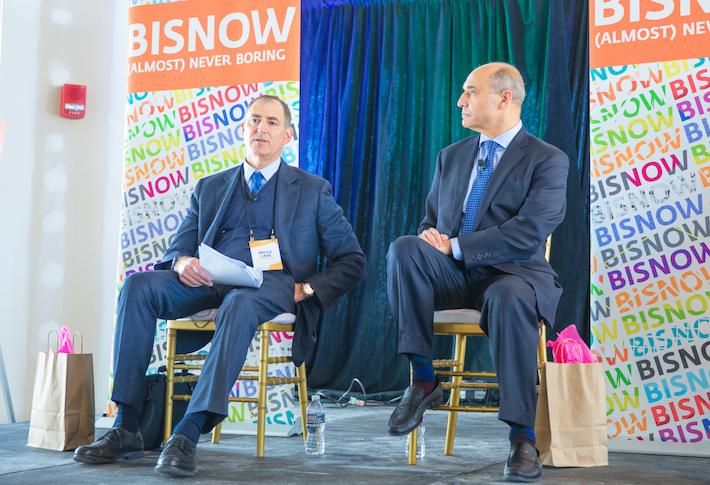 The Meridian Group co-founder Bruce Lane, whose National Gateway development hosted the 900-plus attendees at Thursday's event, said the area's office market is still feeling the effects of the Base Realignment and Closure Act of 2005.

"There's still lots of vacancy throughout Crystal City; we're suffering from it right in this building," Lane said, adding that there's nearly 200K SF available to lease or buy.

Lane speculated the multiplier effect from Amazon could lead to another 3M to 4M SF of demand for office space in the area over the next decade.

"That could absorb existing buildings that JBG Smith owns, it could absorb this building and other space people own in the corridor," Lane said. "It could also fuel new construction." 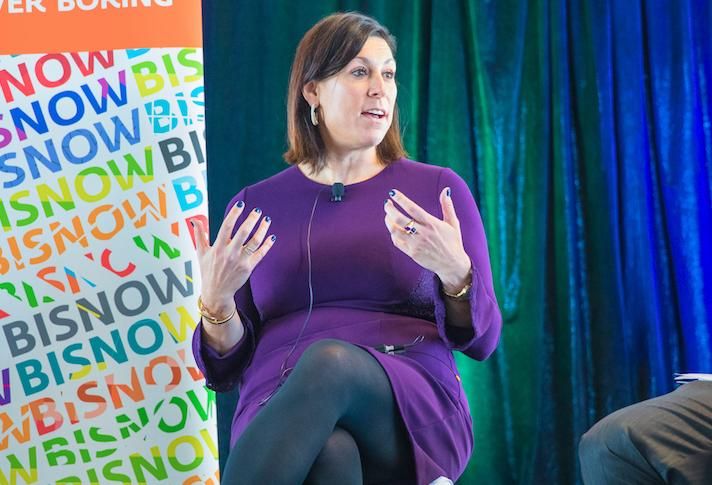 "There has not been a market demand for new office builings in National Landing because there was so much empty; this changes that," Landrum said. "We have office space under construction in Alexandria right now that's tenant-occupied, and for the first time ever I think we're going to have spec office built because of the proximity of these new catalysts."

"What I [expect to] see is a really dynamic, energetic community with some nicely designed buildings," Hoskins said. "When I look at some of these older buildings, my eyes hurt. I think that dynamic, extraordinary design is going to be part of this, too."