Construction Has Finally Begun On The National World War I Memorial In D.C.

For more than a century after World War I ended, Washington did not have a national monument to commemorate its combatants, but after years of slogging through complex approval processes and raising tens of millions of dollars, that is about to change. 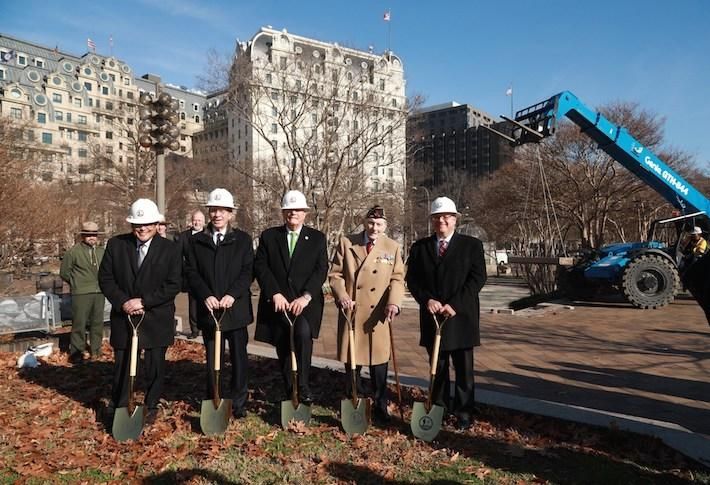 The World War I Centennial Commission last week received building permits and celebrated the groundbreaking of the National World War I Memorial on Pennsylvania Avenue, more than a decade after the effort to build it began.

The groundbreaking comes more than a century after the war ended with the Treaty of Versailles. The Centennial Commission was founded in 2013, and the following year, Congress authorized the construction of a memorial on Pershing Park, a 1.8-acre site just one block from the White House.

Construction was able to begin after the project reached a series of milestones in recent months, including design approvals from the Commission of Fine Arts and the National Capital Planning Commission in September and October, respectively, and the culmination of fundraising.

The Centennial Commission recently reached its goal of raising $40M for construction of the memorial, with donations this year including $1M from the National Football League, $1M from the Carnegie Foundation and $5M from the Lilly Endowment, Centennial Commission Vice Chairman Edwin Fountain tells Bisnow. He said the commission is continuing to fundraise for the dedication events and virtual elements of the memorial.

"To see that many people buy into the vision has been enormously satisfying," Fountain said. "And coming at the culimination of the World War I Centennial, to see those veterans honored in the same way we commemorate the veterans of other wars in the 20th century, is very rewarding." 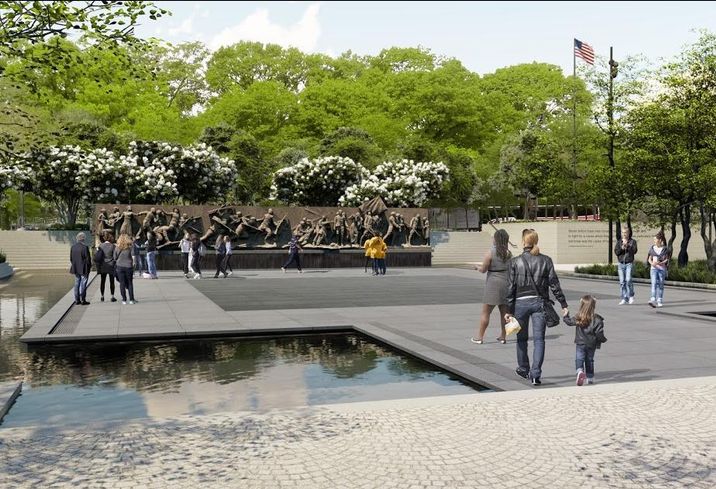 The construction of the World War I Memorial comes after memorials were erected for the Vietnam War, the Korean War and World War II. More than 116,000 Americans died during the First World War, dubbed The War To End All Wars because of its soaring casualty rate, but it has not received the same popular culture attention as World War II. That appears to be changing.

An Oscar-hopeful film about World War I featuring big-name actors, titled 1917, is debuting in theaters on Christmas Day. The film comes one year after Director Peter Jackson released a documentary featuring colorized film footage of World War I, titled They Shall Not Grow Old.

Last week's groundbreaking marks the beginning of the renovation of Pershing Park, which is expected to reopen by the end of next year. The central feature of the memorial, a bronze sculpture entitled A Soldier's Journey, is expected to take about another three years.

The sculpture will stretch nearly 60 feet long and feature 38 human figures running horizontally to show a sequence of events. Sculptor Sabin Howard is working on it in an Englewood, New Jersey, studio and has posted frequent updates on his Instagram page.

The sculpture will stand on an elevated platform above the park's water feature. The figures, including soldiers, nurses, wives and children, will stand about 6 feet tall and slightly above eye level.

"I think it will become a destination in its own right," Fountain said. "We don't do public art like this anymore. Not to say that there aren't other forms of public art with great value, but something like this, a truly monumental work of bronze sculpture by one of the leading sculptors in the world today with the drama and passion reflected in that sculpture, I think will be an attraction because it's unlike anything else in Washington."

The commission decided not to pursue finding a site on the National Mall because the federal Commemorative Works Act prevented new memorials without Congress passing an exemption, and Fountain said the effort did not have the political will behind it. But he thinks the Pershing Park site, on the ceremonial Pennsylvania Avenue corridor that connects the White House to the Capitol, will be a prime location for a memorial.

"It's near the White House and Freedom Plaza at a busy hub between the monumental core, the federal part of Washington and the District part of Washington," he said. "It anchors one end of the most symbolically important street in the country. Inauguration parades will go right by it."

Fountain said he hopes the construction of the World War I Memorial will inspire the sponsors of other memorials to find locations off the National Mall.

"The mall is getting filled up," he said. "We certainly understand the impulse to be on the mall, but not everything can go on the mall ... if we can lead the way to show folks you can have a successful memorial off the mall, we hope that will motivate others to do the same."