Dont let Targets disappointing Q1 numbers (lower than expected profits) sway you about the companys ongoing expansion across Canada, says Ivanhoe Cambridges Co-COO and EVP Roman Drohomirecki (left, at an earlier Ivanhoe property opening), fresh off the plane from this past weekends big International Council of Shopping Centers RECon show in Las Vegas. The impact on the perception of Canada as a fertile ground for US retail expansion in light of Targets move here remains positive, according to Roman. The vast majority of US retailers who expand here are very successful, he tells Bisnow. 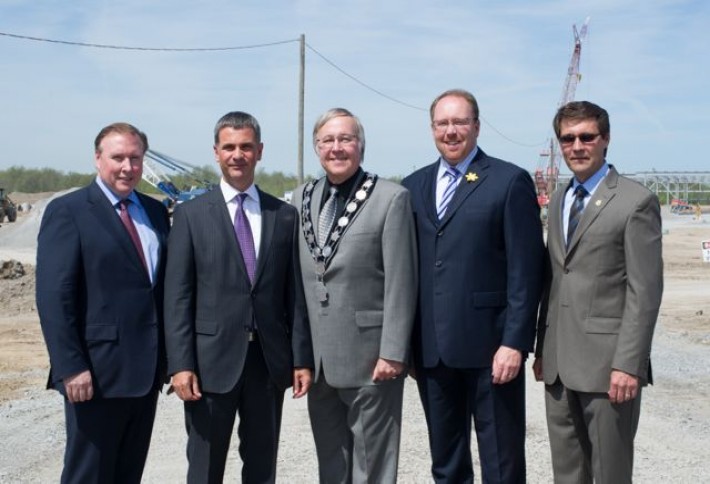 Ivanhoe Cambridge remains bullish on Canadas retail prospects, and backed it up with the formal launch of construction on The Outlet Collection at Niagara, a $200M outlet shopping centre project in Niagara-on-the-Lake. That project will open in May 2014, and will feature around 100 retailers like Banana Republic, Brooks Brothers Outlet, Calvin Klein, Izod, and Michael Kors Outlet. (It's a great day for anyone looking for men's shirts.) Are they at all concerned about the impact of cross-border shopping, we asked? The Outlet Collection will be the only shopping centre on this scale, in terms of number of stores and leasable area, not to mention the fact it will occupy a prime location along the QEW, he says. In other words, no. (In the photo, at the groundbreaking, left to right: Ivanhoe Cambridge's Paul Gleeson and David Baffa, Niagara-on-the-Lake Mayor David Eke, and Dave Lepp and Mike Galloway from the City of Niagara-on-the-Lake.)

We were talking to Schrodinger's cat the other day... or we weren't. Email mark.keast@bisnow.com