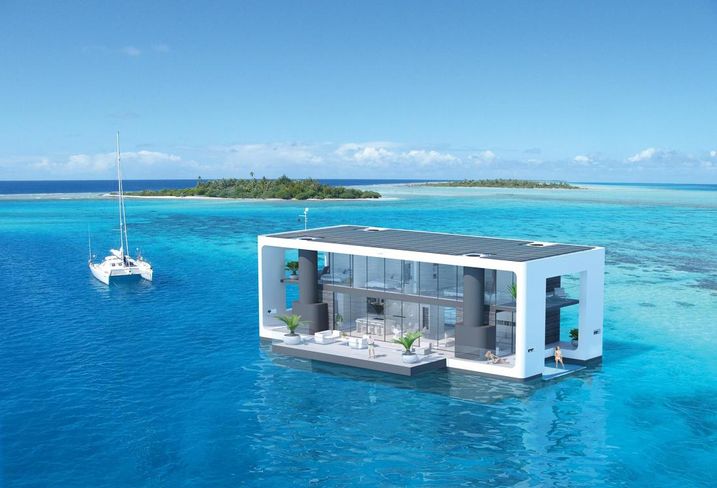 Courtesy of Arkup
The houseboat concept, taken up a few notches.

In South Florida, where countless mom-and-pop marinas have been torn down to make way for waterfront condos, dock space is at a premium. The marine industry is dominated by those who can afford the dockage, which exceeds the cost of the average apartment.

Affluent powerboaters with fishing boats or mega-yachts crowd the waters, and the number of old-school, salty types living on their sailboats is dwindling. Even more rare are “floating homes,” which you might think of as houseboats.

Miami-based Arkup hopes to change that, by offering high-tech, solar-powered “livable yachts” that can serve as primary residences — and offer a solution to sea-level rise.

“Our concept is completely different than what exists on the market,” Arkup founder Nicolas Derouin told Bisnow.

A Dutch architect has designed a prototype yacht, far boxier than one might imagine a yacht to be, which is being built in a Miami shipyard to be unveiled in 2018.

Derouin said several innovations distinguish it from ideas that have come before, including an anchoring system that completely stabilizes the yacht, and a fully solar propulsion system that is sustainable and silent, unlike standard diesel engines.

Derouin said that to power its yachts, Arkup researched batteries used by Tesla and BMW, but ultimately went with Canadian company Corvus, whose products were more tailored to marine applications. The yachts' range is 300 nautical miles (about 550 kilometers) in partially protected waters like bays, rivers, canals and lakes, or on the open sea up to 20 nautical miles from safe refuge.

Derouin said the yachts are designed to withstand Category 4 hurricane winds up to 155 kilometers per hour. A built-in hydraulic system can lift the boat out of the water completely to protect it from storm surges, he added.

Courtesy of Arkup
The bedroom of an Arkup yacht.

Florida's most famous "floating home" owner is Fane Lozman, who saw his home towed away and destroyed by the city government, which he claims was retaliating against him for his activism. He took his case to the Supreme Court, arguing that because it had no propulsion, it was not a “vessel” and therefore not governable by maritime law, which the city had used to make its claim. Instead it had been his home, which should have precluded the government from seizing it. Lozman won his case.

Derouin said his company is aware of the case, and thus changed its product's definition from floating home to livable yacht, because mobility was important to the concept. He said that building floating homes was more complicated because of more restrictive permitting and construction codes.

Derouin said he also spoke with Lozman, who owns submerged land in Palm Beach County and had announced plans to build a floating home community there. Lozman is now looking to build homes on stilts instead.

Arkup's livable yachts, 75 feet long by 32 feet wide, could be docked at marinas with sufficient space. They could also be tied to mooring balls, or anchored for free in safe spots, called anchorages.

“They can also be docked outside marinas, at seawalls where other boats wouldn't go,” Deroun said. “So owners can take advantage of premium locations that are not usually taken advantage of.”

While state law governs anchoring in public waterways, local municipalities govern “liveaboards,” people who live on their boats. So buyers would have to be mindful of local regulations. In some cases, people cannot be considered liveaboards if they own a residence or spend a certain percentage of time on land, Derouin said.

In South Florida, rich homeowners have fought against scrappy-looking sailboats cluttering their view and traveling snowbirds who drop anchor for weeks at a time.

“People have a negative image of houseboats,” Derouin said. “They refer to older houseboats, built without any concerns toward the environment and sustainability. We completely understand that people who live by the bay in waterfront houses don't want to be bothered by people come who come from, say, the northern USA or Canada winter and want to stay there a while."

The livable yachts can be customized, and are expected to cost $2M to $3M. Derouin said he has spoken to buyers interested in the concept, but has not yet closed any sales. Arkup will be exhibiting at the Fort Lauderdale International Boat Show Nov. 1-5 in Fort Lauderdale.