Yeah, yeah, Miami might be underwater soon, but for now at least, the city has a key ingredient going for it: hard numbers.

The city is first in employment growth and fourth in population growth, according to a CityLab analysis of fastest-growing cities this August. Last year broke tourism records — 16.5 million overnight visitors and 6.8 million day-trippers came through — and 2019 is likely to top those. All of this bodes well for the city's hospitality industry. 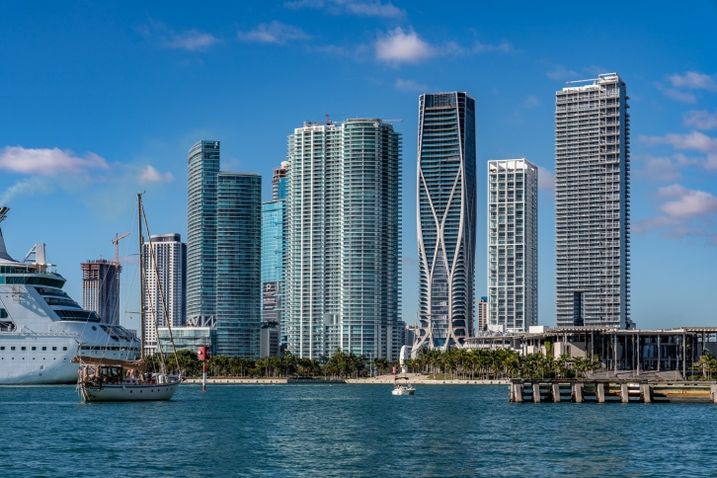 He considers Miami a safer place than most to do business because of low taxes and the diverse visitor set it attracts: South Americans, Europeans and snowbirds. With a rapidly transforming city center, “downtown is finally dense enough to sustain 24/7 restaurants. The ecosystem is finally ready,” Glauser-Benz said.

Miami's downtown population has increased by 40% since 2000, according to the Downtown Development Authority. The $2.7B mixed-use Miami Worldcenter is underway on almost 30 acres.

Glauser-Benz, who will be a panelist at Bisnow's South Florida Hospitality and Tourism Summit Nov. 7, will soon open a downtown location of Dream's boutique hotel concept, to complement one on South Beach and others in New York, LA, Nashville, and Bangkok and Phuket, both in Thailand. In looking for new hotels, he looks for highly dense and hip locations with lots of millennials and great bar scenes.

Because Dream caters to upscale millennials, Glauser-Benz doesn't fret much about home-sharing.

“Airbnb is selling a room and a shower," he said. "We’re selling an experience.”

He also said that, despite hotels being typically one of the most vulnerable asset classes during an economic downturn, his company is well-positioned because of its well-to-do clientele.

“We offer a niche product that attracts high disposable income, so our demographic is normally shielded from any financial stress," Glauser-Benz said.

Greater Miami's Convention and Visitors Bureau has a "hotels-first" initiative, positioning hotels at the center of the guest experience. In Miami Beach, a revamped convention center opened last year, and the city will host the Super Bowl in 2020. Multiple cruise lines are building new terminals.

"Miami is such a hotbed of hospitality, and people all want a piece of it, but you have to have proof-of-concept in order to be successful here," Groot CEO Dave Grutman told the MNT.

Miami has been good to restaurateurs, as well. Michael Schwartz, a winner of the prestigious James Beard Award, has opened six new concepts in just the past year and a half, going from chef to businessman. While's he not quite a real estate mogul, "Maybe I should have been," he joked.

Schwartz, who will also be a panelist at the Bisnow event, made a name for himself when he opened Michael's Genuine in the Design District, pioneering that neighborhood in 2007. His recent openings under his Genuine Hospitality Group include Tigertail + Mary in Coconut Grove, Traymore in Miami Beach, Amara at Paraiso in Edgewater and an out-of-state outpost of Michael’s Genuine in Cleveland.

Schwartz said the success of the original Michael's Genuine gave him a competitive advantage to demand better lease rates for his other concepts. It also prompted lots of people to come to him with offers for new business ideas, though he rarely acts on those, he said.

In Miami, where 22 million people flew into MIA in 2018 and 6 million went on a cruise, tourists make up about 30% of his customers, Schwartz said. But when designing a restaurant, he prioritizes locals.

“We don’t forget tourists for our restaurants — we want them, we need them — but tourists want a local experience," Schwartz said.

If he could give advice to any young chef who’s interested in opening his or her own restaurant, he’d stress the importance of the real estate.

“Spend money on good legal counsel and sign a good lease," Schwartz said. "You don’t want to be thinking about these things in the long run.”