Silicon Valley's bustling office market continued its hot streak in the closing months of 2019 and is poised for more growth this year, according to research from brokerage Kidder Mathews. 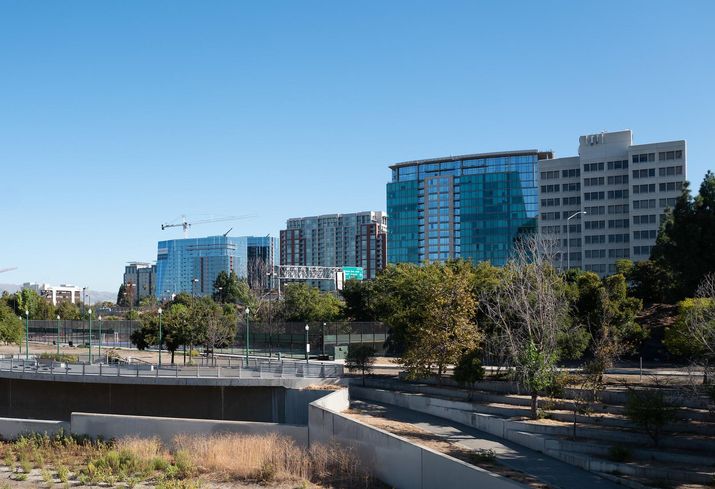 Courtesy of Droneshot
Developers are hard at work trying to meet the strong demand for quality San Jose office space.

And in the coming years, developers will look to capitalize on Santa Clara County's job growth with a number of large office developments, especially in downtown San Jose.

Jay Paul Co., for example, is two months into construction on 200 Park, an 875K SF Class-A office tower a block away from Adobe's own world headquarters expansion.

Elsewhere in San Jose, TMG Partners, Valley Oak Partners and Boston Properties are readying their site to begin work on Platform 16, a 1.1M SF office campus. In North San Jose, developers Richard Peery and John Arrillaga have begun construction on over 600K SF across three office buildings on East Brokaw Road, all of which is pre-leased by Google.

In all, almost 8M SF of office is under construction across Silicon Valley, with developers "scrambling to meet the overwhelming demand for high-quality office space," according to Kidder Mathews. And much less than that total is still available.

"A majority of what's under construction is pre-leased," Kidder Mathews Director of Research Jerry Holdner told Bisnow. "It makes Silicon Valley office one of the best-performing markets in the country, by far."

That dynamic has given confidence to many of the South Bay's most prolific developers, like Jay Paul Co., Sand Hill Property Co. and the Sobrato Organization, to build without a tenant lined up, especially in San Jose.

San Jose and Silicon Valley's other cities performed well in 2019 in other respects, too. A total sales volume of 6.6M SF about matched the 6.7M SF in 2018, highlighted by Google's $1B in acquisitions of several Sunnyvale properties, and average sale price topped $600 per SF, buoyed by rising rents, according to Kidder Mathews.

Given the market's pent-up demand, Holdner predicts more of the same will come in 2020.

"I think lease-rate growth may slow down because the numbers are getting so high, but I said that last year," he said with a laugh. "And it's continued to grow."