Across California, protests continuing in the wake of George Floyd’s death have property owners bracing for another round of damage after the movement's first wave last week.

Floyd, a 46-year-old black man, died during a nine-minute filmed encounter with police in Minneapolis on May 25. That video has sparked nationwide protests over his death, a perceived lack of police accountability and documented police brutality against black men. The Minneapolis police officers involved have been arrested and charged with crimes ranging from murder to aiding and abetting.

Organizers of protests nationwide have denounced property damage committed by looters, both across the country and regionally. Requests for more specific comment were not returned.

CGI, a multifamily owner, investor and developer, told Bisnow that its executive team has been mobilized to figure out how to best protect not just its buildings, which were in the path of the protests across Los Angeles, but also its tenants. CGI said that as part of that, it has deployed more security guards to its apartments in Hollywood, downtown Los Angeles, West Los Angeles, and the Koreatown and La Brea neighborhoods.

“We increased security in all of our buildings, not because we thought something was going to happen, but we wanted to take the extra mile to protect our tenants,” CGI partner and Chief Financial Officer Zion Perets said. 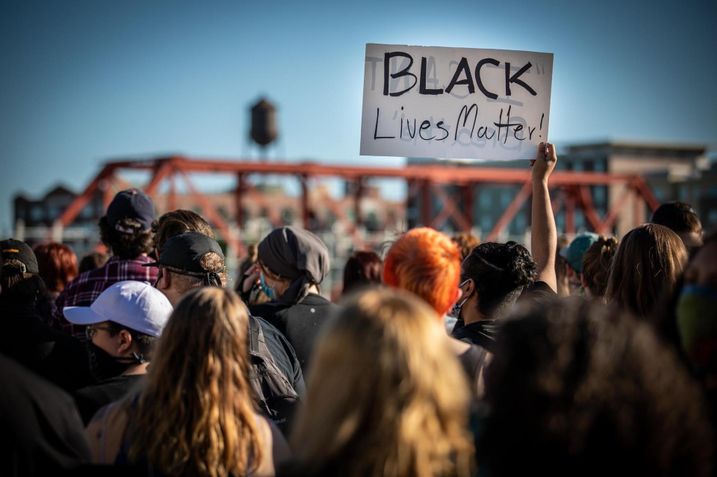 Flickr/Phil Roeder
A protest in Des Moines, Iowa, after the death of George Floyd.

California's turmoil mirrors much of the rest of the country, though many Americans appear more concerned about the root cause of protests than occasional associated violence.

A Wall Street Journal/NBC News poll released Sunday found 59% of 1,000 respondents were more concerned by the death of Floyd than the protests. The poll, which was conducted between May 28 and June 2, also found 80% of registered voters feel the country is spiraling out of control.

The aftermath of protests and occasional damage by looters has shaken some property owners, especially retailers, many of whom are already reeling from the coronavirus-catalyzed downturn.

Statewide, California's protests have been mostly peaceful, with many property owners and retailers voicing their support for protesters. Bisnow recently reported that many of the nation's commercial real estate owners are in support of the ongoing protests despite some damage looting and vandalism.

But some in California's CRE industry said in interviews this week that they also remain leery of looters looking to take advantage of the chaos and destroy or loot properties.

In San Francisco, the first wave of protests devastated retailers in tourist mecca Union Square, where no one was spared the night of May 30, according to Karin Flood, executive director of the high-end shopping area’s business improvement district. It will take time to tally more and finish filing police reports, but the damage from this past week is safely presumed to be in the millions of dollars, Flood said.

“I’d say approximately 40 stores were broken into, where windows were smashed, merchandise taken,” she said. “It was a hit, and it was the large, luxury stores to the mom-and-pop stores. No one was spared.”

Some stores also lost valuable inventory and now have to board up their stores once again.

It is unclear how much property damage has been caused by the protests last week, but for comparison, the five-day protests after the beating of Rodney King caused $1B in property damage in 1992. Whatever the total thus far, it's a figure that is likely to grow exponentially larger the more widespread looting becomes.

In California, as the civil unrest continues from Santa Ana and Newport Beach to the Bay Area, retailers said they were following social media feeds and traditional news outlets to see whether they were in the path of the protests. Although insurance covers much of the damage, most retailers and property owners may still have to shell out some money to cover their deductible.

State Farm agent/owner Neil Estrada said property owners and retail tenants are usually covered under their general liability insurance if the property is broken into, vandalized or looted. Insurance coverage varies by plan.

“Vandalism and property loss and riots happen from time to time, but are not an everyday occurrence,” Estrada said. “I always say business owners need to check with their carriers and review their policy booklet for coverage.”

Other Union Square flagships Grace Jewelers, West Coast Leather and Swarovski were all hit hard May 30, in a wave of damage that will certainly be put before insurers before long.

“Some stores were totally destroyed,” Flood said. “I talked with some of the owners myself on Sunday [May 31] morning, and they’re just devastated.”

Speaking Friday morning, Flood said the business community was “just bracing” itself for the weekend and looking to overcome the delay to reopening plans. Many had just instituted curbside pickup, while others were readying for a Phase 2 reopening that would allow some in-store shopping to start June 15.

“We’ve been at least delayed probably a week, some more than others, from this,” she said. “Many of these retailers were planning to start opening up again.”

Nearby, one jeweler on S.F.’s Fillmore Street was robbed twice in one night, Fillmore Merchants Association Executive Director Vas Kiniris said. Looters tore down the storefront’s plywood boards and broke in. The cops came but then had to leave, leaving the store to subsequently be robbed again, Kiniris said.

Fillmore Street looks “really dismal,” Kiniris said. He estimates 90% of businesses are shut down, with over 40 storefronts boarded up along the corridor.

Farther out in the Bay Area exurb of Richmond, The Shops at Hilltop were targeted the night of June 1, but the property was reasonably prepared with on- and off-site security monitoring, according to LBG Real Estate Cos. Managing Partner Leslie Lundin, whose company owns the 77-acre site.

Lundin said that when LBG officials saw talk on social media of the mall property becoming a target, they started boarding up the property with plywood before realizing they couldn’t get any more because so many other owners were buying it.

“We’ve been told by numerous companies that [speakers are] really what you need to do because when people see and feel like there’s actually people watching them and interacting with them, they’ll go away,” Lundin said.

“If you have a big property, you have to watch it, and being able to have high-quality cameras where there’s actually someone there, watching, unfortunately, I think that’s the way it is," he said. "If you’re a large property, you’re a target.”

Things could have been worse without the off-site monitoring. When looters broke in, off-site personnel alerted on-site security and the police, and the damage was limited to some broken glass. Nothing was stolen.

“We saw that as a huge win for our security program,” Lundin said. Lundin said they are now in the process of adding speakers to their camera system.

Santa Ana has always been a hot spot for protests but these protests were different, he said. Already grappling with the economic conditions caused by the coronavirus, retailers were now wary of looters and vandals. Owners began boarding up their storefront businesses and scrawled a message: Raza-owned. La Raza is a Spanish term for Mexican heritage and self-determination.

“A lot of our members were putting the message on the boards and posting on social media that they support the cause but looters shouldn’t target small minority-owned businesses,” Smoler said.

Smoler said many small-business owners were on the edge of their seats staring at their phones or computers and watching the protests live on Facebook, the news or other social media sites.

“It’s crazy,” Smoler said. “It was like you were watching the group of protesters on the computer and here we are saying, ‘Turn left’ or 'Go to a different direction’ to avoid certain areas of businesses.”

For now, and perhaps until things cool down, the boards covering the retail businesses will remain up, Smoler said.

“It’s been a wild ride,” Smoler added. “We have to take things one day at a time.”