What good is data if it can’t be accessed? As the world relies more heavily on the cloud, connectivity is critical to keep things moving. If there is just one cable connection between two points, odds are it will eventually be cut.

Microsoft learned this lesson the hard way when 2012’s Hurricane Sandy swept in and destroyed its only connection between the U.S. and Europe. At the time, the connection between New York/New Jersey and Europe was Microsoft’s only trans-Atlantic connection. The software giant was desperate.

“We were in a panic,” Microsoft Chief Technology Advisor Dave Crowley said. “We found a carrier in Canada. Whatever they were going to charge us, we were just going to write a check. We were at the mercy of the market.”

To make sure that doesn’t happen again, Microsoft decided to build another connection: a 4,000-mile trans-Atlantic subsea cable called Marea. The company installed the cable in a partnership with Facebook and Telxius. The cable runs from Virginia Beach, Virginia, to Bilboa, Spain, and was completed in 2017. It delivers 160 terabits of data per second. The partnership allowed the companies to share the cost and bandwidth of the cable.

The topic was discussed at Bisnow's DICE Northwest 2018 event on April 25 at The Westin in Seattle. Panels included such topics as the future of technology, financing and investment and the big-picture strategic outlook.

Constructing cable is very expensive, Zayo Senior Vice President of Dark Fiber Solutions Dan Stoll said. It is also very difficult to find the rights and routes to connect between two points, though it can pay off. Zayo is a fiber, bandwidth, co-location and cloud services company.

“If done right it gives incredible returns,” he said. “We are always trying to make investments and sell investments that make take three or five years to install or construct.”

Currently, Microsoft has a big investment in Quincy, Washington, and the connections are proving to be a challenge.

“We are struggling to bring in three completely diverse routes,” Crowley said. “We are working with Dan and others to figure out the best thing to do.”

Crowley prefers having some sort of ownership in the cable connections whenever possible. From Microsoft’s perspective, it is a matter of control to provide the end user with the best customer experience possible. The rest of the unused capacity can be shared with other users. Microsoft has a vested interest in making sure the connections work correctly, even if it doesn’t use all the capacity.

The software company has 226 different products all trying to get online at the same time.

“For example, if you’re an Office 360 user, you call Microsoft and they say you need to call your local carrier,” Crowley said. “Customers don’t like that.

“We don’t really have control all the way out to our end user in this space. We are relying on third-party vendors. It’s critical to have that access to that customer that gives them the good user experience.”

Stoll said customers want to see a single solution no matter the cause of the problem.

“From a customer’s perspective, they don’t really care of it’s a connectivity issue or an electronic issue or an application issue,” he said.

Cable is an expensive venture, and the preference is always for one company to build it, Stoll said. Single ownership gives the owner complete control, though that is a costly venture. In reality, these projects often turn into joint builds with one strong anchor and multiple partners.

The good news is the volume of connection cables is increasing.

“We’re seeing huge numbers of customers coming from the East Coast of the U.S. to get to the cloud capacity that is available in the Pacific Northwest,” Westin Building Exchange Strategic Planning Director Michael Boyle said.

This is due, in part, to the new cables being installed across the Pacific Ocean and going into Oregon, Boyle said. The information can then be moved to the data centers that are popping up in Eastern Washington where land and power are cheap.

For more photos from this event, see the slideshow below: 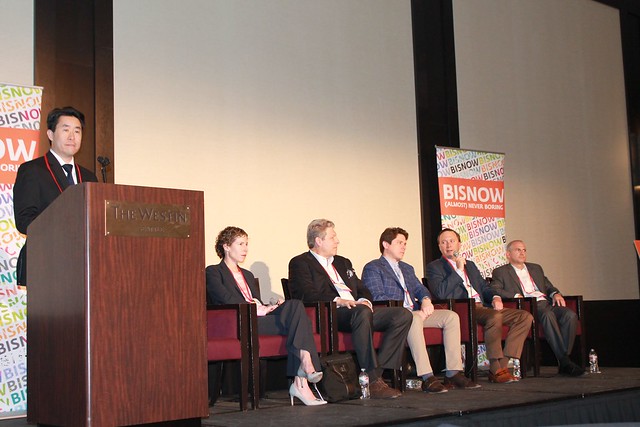