Seattle Developers Are Clamoring For Space Near New Waterfront Park

The property that once lined the old Alaskan Way Viaduct used to be dotted with parking lots and old office buildings. It was loud, dirty and unappealing.

When the Alaskan Way Viaduct was constructed 66 years ago, its ominous presence choked the waterfront off from the downtown district. Soaring a couple of stories above the ground, it created its own sheltered parking, but also left shadowy alleys where danger could lurk. 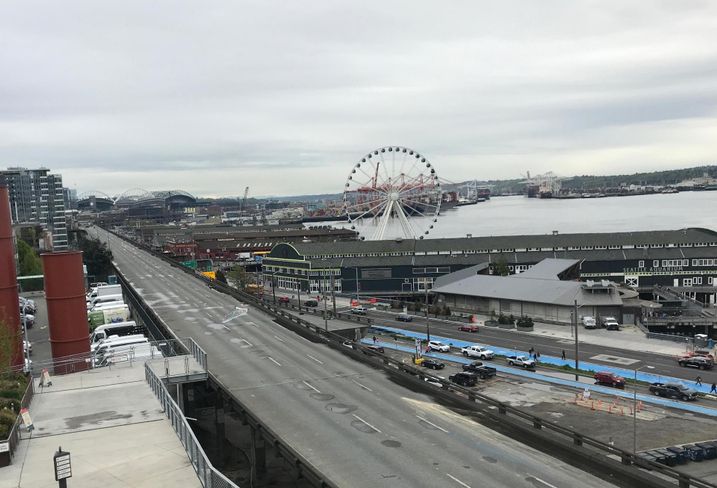 Bisnow/Shawna De La Rosa
A view of the Seattle waterfront with the old Alaskan Way Viaduct still separating the city from the shore. Crews are in the process of demolishing the structure.

Now that the freeway is coming down, the once-gritty stretch is enjoying new attention from local developers who are clamoring to stake out some real estate close to the new-and-improved Waterfront Park and capitalize on the stunning views of Puget Sound and mountains.

The opportunities that new Waterfront Park presents will be discussed at Bisnow’s Future of Seattle’s Waterfront event July 18.

Martin Selig, owner of Martin Selig Real Estate, is one of the developers who has already jumped into the frenzy. In September, Selig purchased an older office building for $44M at 800 Alaskan Way. Selig, who will be participating in one of the panels at the event, plans to build a 17-story mixed-use tower that includes 300K SF of office space, 25K SF of retail and 150 housing units. The new building will overlook the renovated park and have panoramic views.

The new interest in this district makes perfect sense to Pine Street Group principal Matt Griffin, who is another event panelist.

“As a real estate owner, if you owned a piece of waterfront backed by beautiful mountains, would you turn your back on it? Of course not, you’d figure out a way to celebrate it,” Griffin said. “As a community, we are pooling our resources to share and celebrate it. When it’s done, it will be hard to believe we have hidden it for a couple of generations.”

To fund this space, the Seattle City Council passed a Local Improvement District ordinance that was signed into law in January that provides up to $160M. In addition to the LID, city taxpayers will pay $249M (along with another $400M for the Seawall Project), $193M will come from state taxpayers and another $110M from philanthropy.

Donors feel that investing in the project is money well spent, Griffin said.

“Friends of the Waterfront asked us to consider contributing $500K,” Griffin said. “We decided to double that.”

The new park will finally connect downtown to Elliott Bay with easy access. The area will include green connections and public spaces that connect the community to the water and open spaces. More cyclists and pedestrians are expected to congregate along the boardwalk since access will be improved. 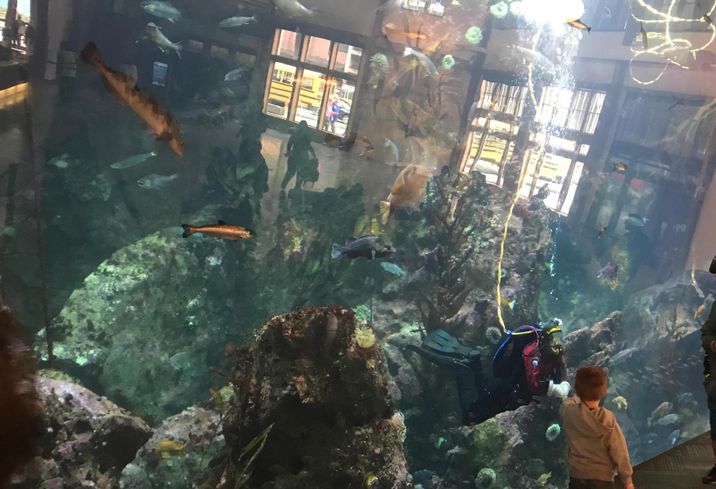 Bisnow/Shawna De La Rosa
The Seattle Aquarium will be one of the new waterfront park's main attractions.

The Seattle Aquarium, which opened in 1977, has long been a tourist draw for the pier. Now, the aquarium will open its new 48K SF Ocean Pavilion in conjunction with the park completion in 2023-2024. The project will include public spaces that help support the aquarium’s mission of inspiring conservation of the marine environment.

“We expect to serve more than 1.2 million guests a year through our new expansion,” Seattle Aquarium spokesman Tim Kuniholm said.

That is a 40% bump in attendance. So far, both the public and business community have rallied around this idea.

“The downtown and city have turned their backs on one of our greatest assets — the waterfront,” Griffin said. “When we now have this unique chance to correct our ways, we want to help do the best job our community can afford.”